Today, the silent Soviet cinema is primarily thought of as either the birthplace of “montage editing” (the use of quick cutting to compress time, space or action in a collage-like fashion) or as an era in which the only films made were government-approved Socialist propaganda. The reality of course was far more complex than that. While all of the major Soviet directors of the day (Russians Sergei Eisenstein, Dziga Vertov, Vsevolod Pudovkin and the Ukrainian Aleksandr Dovzhenko) believed that editing should form the basis of how movies were made, they each had very different ideas about exactly how and why montage should be employed. Also, while a lot of the most famous Soviet silents (i.e., the ones everyone is forced to watch in film school) are unquestionably propagandistic, to explore them in depth is to realize that the era’s best work is impressively diverse, encompassing comedies, melodramas, adventure serials, science-fiction epics and more. Indeed I have no qualms about calling it one of the great periods in cinema history. The following list of a baker’s dozen titles, limited to one film per director, is consciously meant to underscore the era’s diversity.

The Adventures of Mr. West in the Land of the Bolsheviks (Kuleshov, 1924)

Lev Kuleshov is best known today as the namesake of the “Kuleshov effect,” the result of an influential editing experiment involving found footage that illustrated how editing can cause viewers to project their own emotions onto a film’s characters. But he was also a damn fine director in his own right as this wacky comedy proves; “Mr. West” is a rich American who travels to the Soviet Union with his faithful sidekick, a cowboy(!) named Jeddy, and discovers to his amazement that the Bolsheviks are not the evil barbarians that the American press had led him to believe. The evenhanded way Kuleshov satirizes both American and Russian stereotypes is impressive, as is the crack comic timing demonstrated by future director Boris Barnet who performs some Buster Keaton-esque slapstick stunts as Jeddy.

This fascinating, early science fiction film tells the story of Los, a Moscow-based scientist who travels to the capitalistic planet Mars, where he leads the enslaved working class in a popular uprising against their totalitarian leader. The Moscow scenes, which comprise most of the film’s running time, are not nearly as fun as the Mars sequences, which feature some charming German Expressionist-influenced sets and costumes. But this is unmissable for fans of the sci-fi genre as it is essentially the missing link between George Melies’ A Trip to the Moon and Fritz Lang’s Metropolis (whose depiction of robotic workers was clearly taken from here).

A wealthy American businessman, a lowly but chivalrous office clerk, a lascivious film director and a lovestruck cameraman all find their lives intersecting with the title character, a beautiful street vendor played by the delightful Yuliya Solntseva (Aelita). The use of “web-of-life” plotting and a focus on the every day lives of Muscovites (which includes a mind-blowing self-reflexive strain in a subplot where the cameraman is commissioned to make a movie about “every day” Moscow) mark this unusually ambitious comedy as both a priceless document of its time as well as a film well ahead of its time. Think Robert Altman at his finest without the irony or condescension.

The film that launched a worldwide revolution . . . in terms of editing! The most famous of all silent Russian movies is Sergei Eisenstein’s 1925 masterpiece about a failed revolution that took place twenty years earlier. The crew of the battleship Potemkin rebels against unfair living conditions (including being told to eat maggot-infested meat), which causes them to mutiny and kill their commanding officers. When the ship docks in the port city of Odessa, the revolutionary fervor spreads to their comrades on land until the White Russian army is called in to crush the rebellion. The ensuing massacre is justifiably one of the most famous scenes in film history, a frenetic, rapidly edited montage that purposefully breaks the rules of classical editing in order to convey an overwhelming impression of violence and chaos. Whenever you see a shot of a baby carriage rolling down a flight of stairs in a T.V. show or movie, this is what’s being referenced.

Like Battleship Potemkin, this documents a failed revolution circa 1905. But, unlike Eisenstein, who presented the Russian people en masse as a kind of collective hero, director Vsevolod Pudovkin chooses to focus his narrative more intimately on a few well-drawn characters in an attempt to put a more human face on the working class struggle. The plot focuses on a conflict between a father and son who find themselves on opposite ends of a factory strike and the mother who is forced to choose sides between them. She eventually picks up the banner of revolution in a memorable ice-floe climax that tips its hat to D.W. Griffith’s Way Down East.

Abram Room’s astonishing comic melodrama, about a menage-a-trois between a factory worker, his wife and the friend who comes to stay on their couch, is one of the most ahead-of-its-time films of the entire silent era and a kind of prototype version of Francois Truffaut’s Jules and Jim. After the wife (powerfully played by Lyudmila Semyonova) turns from one man to the other and back again, all three characters eventually settle into a “progressive” living arrangement. Shockingly frank in its depiction of sexuality, abortion and female independence, this is the first movie to which I would steer anyone who believes that Soviet films of the 1920s were merely propaganda. 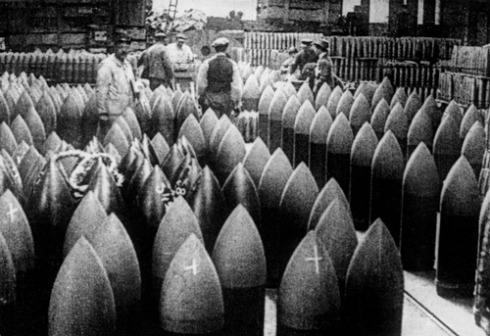 Esther Shub was the most prominent Soviet female director of the silent era and The Fall of the Romanov Dynasty is her masterpiece, a documentary that uses found footage to tell the story of the root causes and after effects of the Bolshevik revolution. Shub was a colleague and friend of Dziga Vertov but eschewed his modernist, self-reflexive style in favor of what she termed “editorialized newsreels,” which saw her cut together historical footage (much of it shot prior to 1917 by other hands) with title cards that offer a Marxist interpretation of Russian history from 1913 to 1927. Brilliantly edited, informative and accessible, this is one of the best places to start understanding both the silent Soviet cinema and early 20th century Russian history. 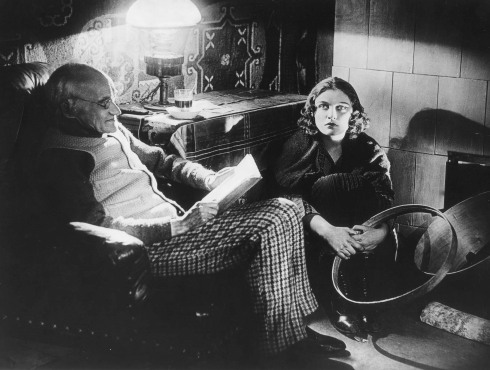 Directed by the unjustly unknown Boris Barnet, this awesome Hollywood-style romantic comedy tells the story of Natasha, a comely young woman who makes hats for a living and commutes from her rural village to Moscow in order to sell them. She agrees to an altruistic marriage of convenience in order to provide boarding to a homeless college student; ironically, when Natasha comes into possession of a winning lottery ticket worth 25,000 roubles, her “husband” is the one man in her life who is not interested in her fortune. Energetic, witty and fast-paced, this builds to a memorable climax under Barnet’s sure hand.

Dziga Vertov’s radical experimental/documentary hybrid shows “a day in the life” of Moscow circa 1929 although the film had been shot over a period of several years in multiple cities including Moscow, Kiev and Odessa. The strobe-effect editing is mind-blowing even by today’s standards (the average shot length is less than three seconds) and the film is so densely packed with ideas that even after dozens of viewings, I find that it still has secrets to reveal. But this is more than a “city symphony” film; it’s also one of the greatest movies ever made about the act of filmmaking, showcasing the talents of not only Vertov but his brother Mikhail Kaufman (the cinematographer who also frequently appears on screen as the title character), and his wife Yveta Svilova (the editor and the film’s true hero). The result is a film that playfully calls attention to the filmmaking process and its almost magical ability to record and transform reality.

One of the best and least propagandistic documentaries of the silent Soviet cinema is this straightforward account of the building of a railroad across central Asia – stretching all the way from Siberia to Turkestan. The filmmakers show how the railroad is necessary for the transportation of cotton and grain and its construction is presented as a triumphant example of both engineering and the can-do Soviet spirit. This is full of stirring, poetic imagery of nameless figures toiling in a rugged landscape and exerted a massive influence on British documentaries of the early sound era (e.g. Night Mail). 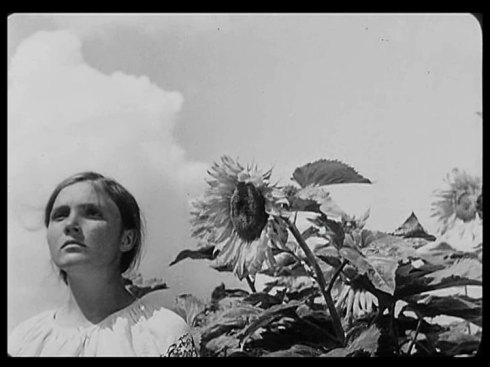 My favorite Soviet film of the silent era is Aleksandr Dovzhenko’s Earth, whose slender narrative about the virtues of collective farming in the Ukraine is merely an excuse for the director to present a succession of rapturously beautiful painterly images: wheat fields waving in the wind, rain falling on fruit, a young woman standing next to a giant sunflower, and a series of unforgettable faces, often framed in low-angle close-ups, that resemble paintings of religious icons. Dovzhenko got his start as a painter and cartoonist and his purely visual approach to storytelling would serve as a model for future Soviet directing greats Andrei Tarkovsky and Sergei Paradjanov. 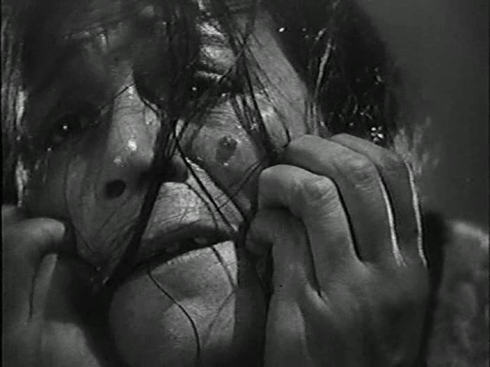 Mikhail Kalatozov is best known for his 1964 Russian/Cuban co-production I am Cuba, one of the most amazingly photographed movies ever made. But this early ethnographic documentary, made over thirty years previously, shows that he was always a restless experimenter in search of extraordinary images. The subject of the film is a remote Georgian village whose population is suffering due to a lack of salt. The exciting climax shows how the building of a new road ultimately connects this village to the rest of Soviet civilization, which promises to bring both health benefits as well as intellectual enlightenment (Kalatozov presents the Svan people’s Christianity as Exhibit A that they are a primitive, backwards people.) Like Nanook of the North this may have been mostly “staged” but that does not detract one iota from the film’s beauty and power.

A ridiculously funny slapstick comedy about the life of a lazy farmer both before and after the Bolshevik revolution. The farmer (named, appropriately, “Loser”) and his wife, like many Soviet movie characters of the era, are only able to find true happiness in collective farming. Director Aleksandr Medvedkin, who was the subject of Chris Marker’s superb documentary The Last Bolshevik, claimed late in life that the film’s satire was subversively directed at the Bolsheviks and their futile dreams of happiness. Whether that is true or wishful thinking in hindsight, one thing is for sure: Happiness is full of unforgettable comic images – from a spotted horse to nuns wearing see-through habits – and if that can’t demolish Western stereotypes about “Soviet austerity,” nothing can.