Jean Vigo’s ZERO FOR CONDUCT at the Siskel Center

I wrote about Jean Vigo’s masterpiece Zero for Conduct for Cine-file Chicago. It opens in a new 4K restoration at the Gene Siskel Film Center in Chicago today. 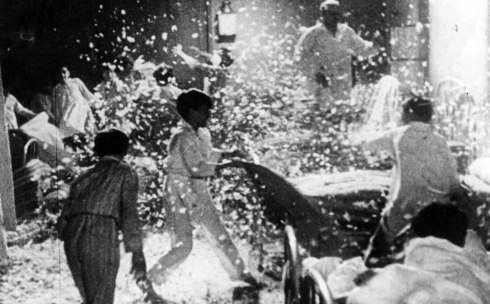 ZERO FOR CONDUCT (1933), Jean Vigo’s penultimate movie, is a 49-minute featurette that packs a greater punch than most films twice its length. A remarkable tribute to the anarchic spirit of youth, it is perhaps best known today for the major influence it would go on to exert on both the French and British New Waves several decades later (François Truffaut’s THE 400 BLOWS would be unthinkable without it and Lindsay Anderson’s IF… is an unofficial remake), but make no mistake: there’s no substitute for the original. Vigo’s poetic rendering of the rebellion of four pre-adolescent boarding school students is so incendiary as an anti-authoritarian statement that it was banned in France until the end of World War II. There are unforgettable, occasionally surreal images—from the school’s principal, a dwarf, who keeps his prized bowler hat under a glass dome to the slow-motion shots in the celebrated pillow-fight sequence—but, as in Vigo’s more well-known L’ATALANTE made one year later, ZERO FOR CONDUCT’s aesthetic daring never overshadows the emotional sensitivity the director shows his protagonists. This is fitting given that, according to biographer Paolo Emilio Salles Gomes, the film was based on Vigo’s own childhood memories. Preceding ZERO FOR CONDUCT are Vigo’s shorts A PROPOS DE NICE (1930) and TARIS (1931). The former is a “city symphony”-style travelogue of the title location marked by astonishing stylistic flourishes (the low-angled shots of bare-legged women dancing on a balcony are particularly memorable for their eroticism) while the latter is a short experimental documentary about a champion swimmer that allowed Vigo to try out the underwater cinematography he would take to dizzying heights in L’ATALANTE. (1930-33, 83 min total, DCP Digital) MGS

2011 didn’t see me go on quite the same insane Blu-ray buying spree that last year did. Perhaps the fascination of watching movies, new and old, in the bold new HD format has started to wear off a little. But mostly I think this was because I made a short film myself this year, which of course sucked up a lot of my time, energy and money. Therefore, I’m including a list of “only” my top thirty-five favorite home video releases (as opposed to last year’s fifty) — comprised of a countdown of the top ten, each with a capsule review, and an alphabetical list of an additional 25 runners-up. As with last year, the rankings were arrived at by averaging out what I estimated to be the overall quality of the film, the quality of the image/sound transfer and the quality of the supplements. In the interest of diversity, I also limited myself to one film per distributor for my top ten.

Any videophiles reading this should feel free to chime in with their own favorites in the comments section below.

Kino unleashed a hi-def Buster Keaton motherlode in 2011 — including a three-disc short films collection spanning the years 1920 – 1923, a double bill of Battling Butler and Go West and my personal favorite of the great clown’s works, 1923’s uproariously funny Our Hospitality. This inexhaustibly re-watchable stunt-filled comedy sees Keaton’s Willie McKay travel from New York to the rural south to claim an inheritance, unaware that he will soon be embroiled in both a romance and a Hatfield/McCoy-style feud. This is presented in an interlaced transfer (meaning “combing” is occasionally visible) in order to maintain the original speed at which the film was shot and the running time at which it was originally projected. (Although Kino, unlike Masters of Cinema with Coeur Fidele, could have released a superior, progressive-scan version if they had been willing to put in a lot of extra work). Still, this is the best Our Hospitality has ever looked on home video and I was particularly delighted to see it color-tinted for the first time.

The most underrated title of the year — one that I didn’t even see rate a mention on the most popular Blu-ray review sites — is Sony’s Taiwanese release of Edward Yang’s 1986 masterpiece The Terrorizers, a terrific metaphysical mystery about the lives of three couples in Taipei that continually intersect over a span of several weeks. Yang is sometimes referred to as the “Chinese Antonioni” and if his debut That Day On the Beach is his L’avventura, then this more ambitious follow up is his Blow Up — a film with a surface thriller plot that is less important than the tantalizing questions regarding the connections between life and narrative at its core. I’ve never seen this movie in any other incarnation but Sony’s 1080i transfer is at least as impressive as their release of Hou Hsiao-Hsien’s Dust in the Wind from last year. The lush “1980s” color palette looks especially nice.

Leo McCarey’s final masterpiece charts the unlikely romance between a millionaire playboy (Cary Grant) and a night club singer (Deborah Kerr) who fall for each other on a cruise in spite of being engaged to other people. Wrongly labelled a saccharine “women’s weepie” (damn you, Sleepless in Seattle!), this actually starts off as a very funny screwball comedy (note the incredibly witty banter between Grant and Kerr on the boat) before gradually shifting to a sublime Frank Borzage-style romantic melodrama in its second half. But even the word “melodrama,” while apt in the literal sense, feels inappropriate for a film that can be as surprisingly delicate and understated as this. Written, directed and acted to perfection, this is as moving as movies get. Fox’s hi-def transfer of the original Technicolor elements is pleasing and true. 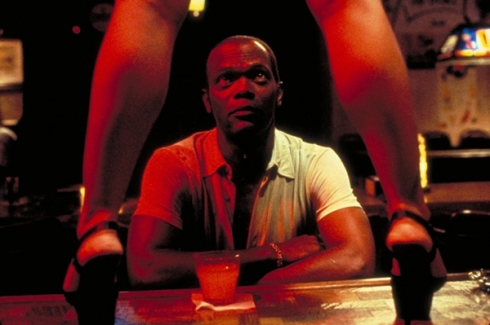 At the time it was released, many felt that this didn’t live up to the expectations generated by the phenomenal success of Quentin Tarantino’s previous outing, Pulp Fiction, from three years earlier. Today, Jackie Brown, a low-key adaptation of an Elmore Leonard crime novel about a flight attendant’s attempt to beat a money-smuggling rap, looks like the better movie. It’s an intricately plotted yarn that masks its complexity with relaxed pacing, delicious dialogue and the warm affection that Tarantino extends to all of his characters. And there are career best performances from Samuel L. Jackson, Robert Forster and Pam Grier. Shot by the great Guillermo Navarro, this exercise in retro-70s cool looks and sounds (The Delfonics!) better than ever on Lionsgate’s extras-laden Blu-ray. Did I mention you can get this on Amazon for just $10.99?

The Criterion Collection owns the U.S. home video rights to Abbas Kiarostami’s latest and greatest but have apparently decided to sit on it until at least 2012. Therefore, I’m exceedingly grateful to the U.K. label Artificial Eye for putting out this region-free Blu-ray and letting me have a chance to revisit my favorite theatrical film of 2011. Upon further viewing, I’m less convinced this is any sort of “puzzle film” at all but rather an allegory about the difficulty of communication between Man and Woman (as embodied by William Shimell and Juliette Binoche) in the modern world. Shot on the RED One camera, the digital-to-digital transfer done for this disc is unimpeachable. Also contains a fascinating, feature-length making-of doc, Let’s See Copia Conforme. A special thank you to Jessica for the gift. 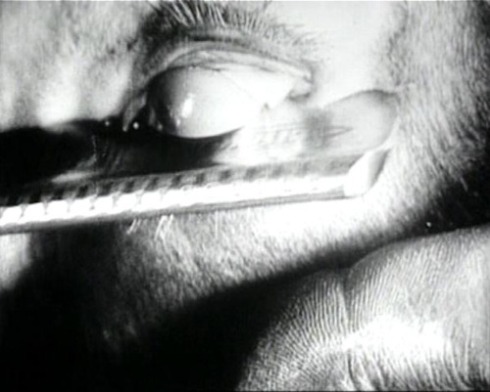 Luis Bunuel’s Un Chien Andalou and his feature length follow-up L’age d’Or, arguably the two most important Surrealist films of all time, were never intended to look or sound all that pristine. In fact, their technical crudity is just one of the strategies Bunuel implemented to intentionally piss off his original audience. Nonetheless, these delirious sex-and-death obsessed fever dreams, full of hilarious, provocative digressions and repeated attacks on both church and state, look and sound better than I ever thought possible. Even the damage caused by the ravages of time is more visible due to BFI’s impressive 1080p transfer — and I have a feeling that’s just the way Don Luis would’ve wanted it. “Slicin’ up eyeballs, oh-ho-ho-ho-ho!” L’age d’Or essay here.

The brilliant Portugese director Manoel de Oliveira makes his hi-def debut with this incredible package from Cinema Guild that contains both his very first film, 1931’s Douro, Faina Fluvial as well as his most recent, 2010’s The Strange Case of Angelica. The earlier movie is an extremely impressive, fast-paced avant-garde documentary short about working class life in Porto (Oliveira’s hometown) while the latter is a slow, stately CGI-buttressed masterpiece about a photographer who falls in love with a beautiful but inconveniently dead young woman after being commissioned by her family to photograph the corpse. It’s no exaggeration to say that, taken together, these films, made 80 years apart, contain the totality of cinema.

As with BFI’s Bunuel release, Criterion has seemingly done the impossible by taking Jean Vigo’s beloved films of the late silent/early sound era, which have been kicking around forever in poor quality versions, and managed to make them look sparkling and fresh and new. L’atalante in particular is a revelation; it has always been the most modern-looking movie of its era because of its unabashed eroticism as well as its incredibly striking sense of composition (courtesy of ace cinematographer Boris Kaufman). Rounding out the set are all of Vigo’s other movies: Taris (a short experimental documentary about a swimmer), A Propos de Nice (one of the most poetic and playful of all city symphony films) and his immortal tribute to anarchic youth, Zero de Conduite. Vigo was a visionary genius who left this world far too soon. But his films will live forever and, thanks to Criterion, can now be readily experienced under the optimum conditions they should be. L’atalante essay here. 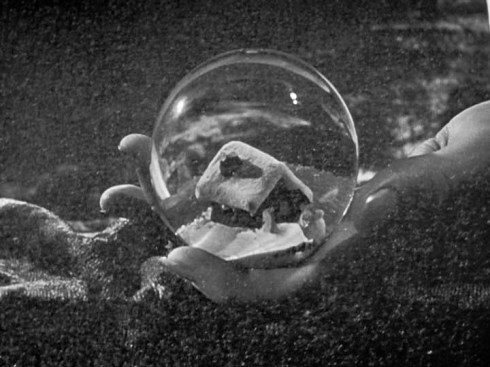 Citizen Kane finally gets the home video treatment it deserves courtesy of Warner Bros.’ staggeringly elaborate new box set, which includes by far the most film-like (and thus best ever) presentation it has seen in terms of image and sound. It also includes a handsomely-produced hardback book about the making of the film, postcards, an excellent quality DVD of Welles’ follow-up The Magnificent Ambersons (its North American digital debut) and a whole host of other goodies that I won’t be able to finish going through until probably late into 2012. To paraphrase Mr. Thatcher, I wish I were a little boy watching this movie for the first time in this particular edition! Full review here.

Jean Epstein’s Impressionist classic from 1923 is the midway point between the Victorian melodrama of D.W. Griffith and the Surrealist-inflected romance of Jean Vigo’s L’atalante. The plot concerns a love triangle between working class characters but it’s the rapturously beautiful cinematography and poetic use of dissolves — most notably during the famous “carousel sequence” — that lift this movie up to heaven’s door. Masters of Cinema’s glorious HD transfer (which involved painstaking work to ensure that the film would run at the correct speed) of Gaumont’s impeccable photochemical restoration makes this my favorite Blu-ray release not just of the year but of all time. Discovering a major masterpiece like this just when I thought I’d seen it all is the kind of thing that makes life worth living.