Warner Brothers has a track record of putting out impeccable high-def transfers of their catalogue titles on Blu-ray — when they can be bothered (their neglect of the considerable number of silent movies to which they own the rights is unfortunate) — and The Band Wagon is no exception. This is for my money Vincente Minnelli’s best film and the greatest of all Hollywood musicals. Fred Astaire, in a role that must’ve been uncomfortably close to his real-life situation, is a legendary but over-the-hill hoofer hoping to make a triumphant return on Broadway but who must first contend with a pretentious director (Jack Buchanan) and a saucy young co-star (Cyd Charisse). The Blu-ray of this love letter to the musical genre and the process of collaborative art-making is perfect. Among the extras, ported over from the DVD, is a nice audio commentary track by Liza Minnelli who vividly remembers visiting the set as a little girl. That’s entertainment indeed. 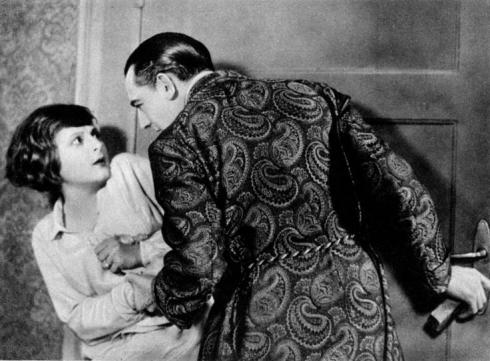 The new Blu-ray of the F.W. Murnau Foundation’s impeccable restoration of this classic German silent was mired in controversy due to the inclusion of a single musical-score option: a track by the British musical group The Tiger Lilies that features a prominent vocal throughout. Personally, I kind of like it but, even if I didn’t, this is still a must buy; it’s Variete, uncut and looking better than it probably has since the silent era. For those who’ve never seen it, the chief selling points are the heartbreaking and uncharacteristically subtle lead performance by Emil Jannings and the dazzlingly subjective cinematography, especially during the trapeze sequences, by the great Karl Freund (Metropolis). This reasonably priced German disc thankfully comes with optional English subtitles and is region free. There are no plans for a U.S. release. Full review here.

I don’t think that either of these individual movies or their respective HD transfers are quite as impressive as, say, Criterion’s recent release of Hiroshima Mon Amour or Kino/Lorber’s Je t’aime, je t’aime disc. However, there is something to be said for an enterprising distributor like Cohen Media Group taking a chance on putting out the lesser-known work of a master filmmaker. And there is even more to be said for the incredible value of bundling two films together into one package (Cohen did something similar a few years back with their essential Claude Chabrol/Inspector Lavardin set). Not only was it a pleasure to revisit these underrated gems, I also greatly appreciated the casual audio commentary tracks by Francophile-critics Andy Klein and Wade Major. Further thoughts here.

The Criterion Collection is putting this out next year and there’s no doubt in my mind that their release — in terms of transfer quality and, especially, extras — will handily best Mr. Bongo’s disc. But I don’t regret scooping up this bare-bones release for one second. The first time I saw Chimes at Midnight was on a terrible-quality VHS tape that I rented from Facets Multimedia (the only way it could be seen in the U.S. at the time) and I recall putting my face only inches away from the screen so that I could absorb the sounds and images of Orson Welles’s masterpiece as thoroughly as possible. Jonathan Rosenbaum once noted that, in making this film, Welles essentially created a new Shakespeare play by mashing up the Falstaff cycle (the two Henry IV plays, Henry V and the Merry Wives of Windsor). The result is also, perhaps paradoxically, Welles at his most cinematic: the famous “Battle of Shrewsbury” sequence is an insanely great montage that stands as the most remarkable such battle scene in the history of movies. I still cannot believe that I am finally able to see this in an amazingly restored version (courtesy of Luciano Berriatúa of the Filmoteca in Madrid) in 1080p on my home television.

Deciding which Criterion release will make my year-end best-of list (I limit myself to one title per distributor in the interest of diversity) is always a challenge. This year, the decision was made a lot easier by their amazing Blu-ray box set of Satyajit Ray’s legendary Apu trilogy. Not only are these among the finest films in the history of cinema — they capture the ebb and flow of life as it is simply lived with an uncommon clarity and power — Criterion also did heroic work in “rehydrating” and restoring the brittle, fire-damaged original negatives (for a thorough account of what this elaborate process entailed, read this illuminating interview with Lee Kline). What a joy it is then to revisit these humane masterworks, which follow the experiences of one individual from his early childhood in a poor and rural Bengali village into adulthood and professional literary success, in such exceptional quality.

Chinese director King Hu is the most important director of the martial arts genre (his relationship to wuxia is similar to that of Hitchcock to the thriller or Ford to the western) and Dragon Inn is one of his most significant achievements. It was the first film he made after leaving Hong Kong (where he was a contract director for Shaw Brothers Studios) and establishing his own independent production company in Taiwan where he was able to exert more creative control over his work. The plot details the attempts of an evil eunuch to kill off the children of a rival politician in ancient China. Meanwhile, a brother/sister martial-artist duo also conspire to help the children, and all of these characters come together for a memorable showdown at the titular inn located in the desert. The fight choreography is killer but how that choreography is captured via Hu’s rigorous cinematography and editing schemes is what truly impresses. This new transfer looks amazing on Blu-ray, especially the deep-focus exterior shots of desert vistas, some of which seem to stretch into infinity. Thankfully, Eureka/Masters of Cinema has also announced a limited-edition release of A Touch of Zen, Hu’s greatest movie, on Blu-ray in January.

4. Dziga Vertov: The Man with the Movie Camera and Other Newly-Restored Works (Vertov, 1929, Flicker Alley Blu-ray) 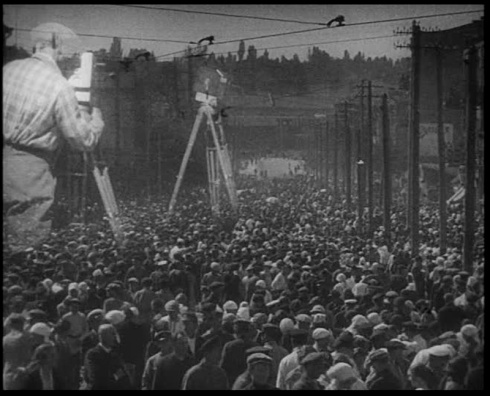 Man with the Movie Camera, an experimental documentary that served as the apotheosis of the Soviet-montage era, is a film that continues to look better and more modern with each passing year. Director Dziga Vertov, along with his brother and cinematographer Mikhail Kaufman and wife and editor Elizaveta Svilova, created the definitive self-reflexive movie with this hyperkinetic portrait of a day in the life of a cameraman (which was actually filmed over five years in three different cities). Flicker Alley did the world a huge favor by putting out a Blu-ray of this deathless masterpiece based on a definitive new restoration (courtesy of the joint efforts of Lobster Films, Blackhawk Films Collection, EYE Film Institute, Cinémathèque de Toulouse, and the Centre National de la Cinématographie). Not only does Man with the Movie Camera now look better than ever, it also contains shots missing from all previous home video releases and runs at the correct speed for the first time. Best of all, it is married to the best soundtrack of the many that have been composed for it over the years: the Alloy Orchestra’s pounding 1995 score that itself was based on Vertov’s detailed instructions. Flicker Alley’s set is very nicely fleshed out by an additional three features: Kino Eye, Enthusiasm and Three Songs of Lenin. 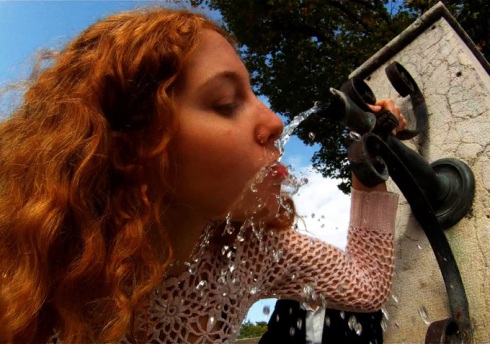 In 2014, Jean-Luc Godard reinvented cinema yet again with Goodbye to Language, his fascinating first feature-length foray into the 3-D format. The use of stereoscopic cinematography was crucial to the overall meaning of the film — from the jokey use of floating intertitles to the innovative way he had a single 3-D image break apart into two overlapping two-dimensional images by panning the right-eye camera while keeping the left-eye camera stationary. More so than any other 3-D movie, there is no point in even attempting to watch this in 2-D. Knowing that to be the case, I purchased a 3-D television and a 3-D Blu-ray player pretty much for the sole purpose of being able to experience this masterpiece again and again at home. Kino/Lorber’s Blu-ray looks almost identical to the film’s theatrical presentation (with the only significant difference being the absence of the variation in color grading between the left and right-eye images that could be observed on the big screen). Among the fine extras are an interview with JLG conducted by the Canon camera company, who were clearly proud of the fact that this God-level director was using their equipment, and a booklet essay by David Bordwell.

The British Film Institute really upped their Blu-ray game in 2015, releasing, among many worthy titles, two separate Roberto Rossellini box sets — one devoted to his celebrated War Trilogy and another devoted to the cycle of melodramas he made with paramour Ingrid Bergman. But the crown jewel of their release slate this year was the “Carl Theodor Dreyer Collection,” a limited-edition box that bundles together four features by the Danish master-filmmaker: the silent feminist-comedy Master of the House (1925), the medieval witch-hunt expose Day of Wrath (1943), the austere spiritual drama Ordet (1955) and his sublime final film Gertrud (1964), which examines the romantic life of a woman with impossibly high ideals. The BFI did Dreyer justice by putting out these transcendentally uplifting films in wonderful quality and also stacking the set with welcome extras, including seven(!) shorts by Dreyer as well as the informative feature-length doc Carl Th. Dreyer: My Metier.

I’ve often said that animation has long been something of a blind spot for me, citing my preference for watching live-action movies as the result of my fondness for “looking at real people.” My interest in animation, however, has grown exponentially over the past few years due to the fact that it has been of so much interest to so many of my students. Besides, if one accepts that “mise-en-scene” can be defined as the director’s control over all of the elements within the frame, then the truest masters of mise-en-scene are arguably the world’s greatest animators; do they not, after all, have the tightest control over all of the details that appear in every shot of every film? This is certainly true of Japan’s beloved Hayao Miyazaki, who both wrote his own screenplays and painstakingly animated nearly all of his films by hand; and one must give credit to the Walt Disney Company (in spite of their dubious and occasionally evil business practices) for bringing the work of this great auteur to a wide American audience. The eleven feature films included in this box set are all presented complete and uncut and feature the option of the original Japanese language soundtracks (with faithful English subtitles) in addition to the option of the English-dubbed tracks. This is so much better than the raw deal that many foreign-language films — especially those from Asian countries — have gotten in the States over the years. Best of all, the films themselves are consistently terrific. From the relatively conventional but rip-roaring damsel-in-distress rescue yarn Lupin III: The Castle of Cagliostro to his perfect swan song, the aeronautical-engineer biopic The Wind Rises, Miyazaki obsessively revisited the same stylistic tropes and themes — feminist heroines, prescient anti-war and ecological themes, exhaustively detailed science-fiction landscapes, images of aircrafts in flight, and an admirable, near-total absence of villains. Prior to the release of Disney’s box set, I had only seen three of Miyazaki’s films. Purchasing his collected works gave me just the excuse I needed to finally watching them all and I’m so glad that I did; I may be late to the party but I now regard him as Japan’s finest living director. Here is my “report card” for each of the individual films within the set:

Lupin III: The Castle of Cagliostro – B
Nausicaa of the Valley of the Wind – B+
Castle in the Sky – A-
My Neighbor Totoro – A+
Kiki’s Delivery Service – A
Porco Rosso – A
Princess Mononoke – A+
Spirited Away – A-
Howl’s Moving Castle – A
Ponyo – A-
The Wind Rises – A+