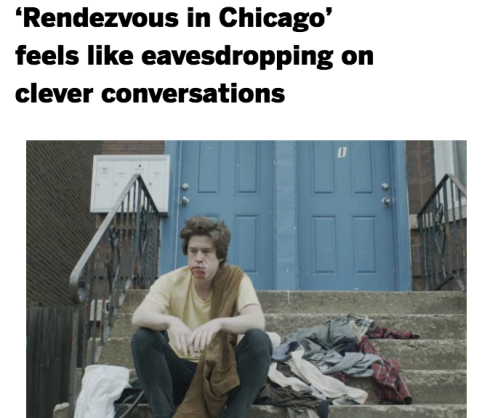 Happy Chicago Premiere Day! I am very fortunate that RENDEZVOUS IN CHICAGO has received some stellar reviews from some great film critics in the days leading up to tonight’s local premiere at the Gene Siskel Film Center!

In today’s Chicago Sun-Times, Richard Roeper calls RENDEZVOUS IN CHICAGO “a quiet and yet exhilaratingly entertaining comedic drama consisting of three stand-alone vignettes.” You can read his full 3-and-a-half (out of 4) star review here.

In a “Recommended” review at Newcity Chicago, Ray Pride writes “RENDEZVOUS IN CHICAGO falls somewhere between the squirrelly hush and face-level modesty of Éric Rohmer and the spiky, quietly antic trickery of Arnaud Desplechin.” Read his full capsule here.

At HollywoodChicago.com, Pat McDonald writes “Michael Glover Smith has paired the pitch of woo in a sophisticated Midwestern burg. RENDEZVOUS IN CHICAGO is the romance-in-the-Windy-City movie the world has been waiting for.” You can read his full 5 (out of 5) star review here.

At ChicagoFilm.com Lee Shoquist concludes his review by writing “In RENDEZVOUS IN CHICAGO, Smith and his talented stable of local actors remind us that storytelling, more than anything, is about a well-written screenplay, engaging stars (with whom he generously gives ample close-ups and minimizes cuts as to allow sustained moments to build character) and recognizable human interaction.” Read the full review here.

Tonight’s screening at the Siskel Center is sold out but you can purchase tickets for our remaining three shows (on 2/9, 2/11 & 2/13) online at the Siskel’s website here. 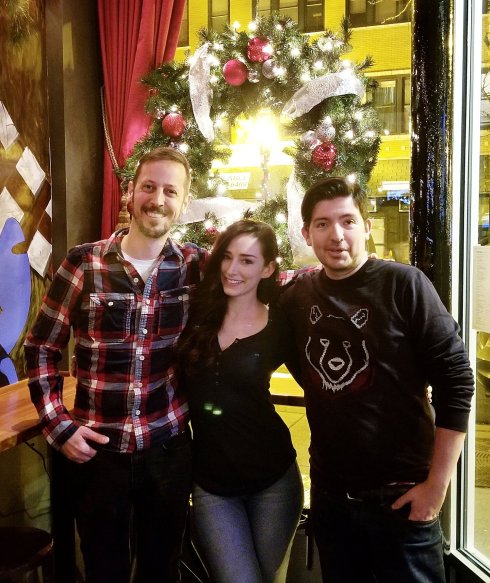 Because of the screenings of my film Mercury in Retrograde at the Gene Siskel Film Center over the next week (Friday, 2/16, Monday, 2/19 and Wednesday, 2/21), the film has been in the press a lot this past week. Among the highlights:

In the Chicago Sun-Times, Richard Roeper calls the film “absolutely beautiful…a smart, funny, quietly effective and authentic slice of older millennial life…Smith has a deft touch for dialogue, creating six distinct characters who look and sound like people we know…the interaction between the uniformly excellent actors feels natural and unforced.” You can read his great, spoiler-free full review here.

Andrea Gronvall of the Chicago Reader has a nice capsule review in which she calls the film an “observant, nuanced indie” and notes the humor in the book-club and disc-golf scenes (an aspect that has been too unremarked upon in other reviews). You can read her notice here.

It was an honor to be interviewed by Donald Liebenson for the mighty RogerEbert.com site. I am proud of the fact that I uttered the sentence “F.W. Murnau is my master” in this interview. Peep it here.

Two fun MiR-related radio interviews also premiered online in the past week: you can listen to me and the fabulous Najarra Townsend talk about the film with Gary Zidek on his show “The Arts Section” here. You can also here me talk about the film on the WGN Radio podcast “No Coast Cinema,” an essential listen for cinephiles, with hosts Tom Hush and Conor Cornelius here.

Hope to see you at one of the screenings!