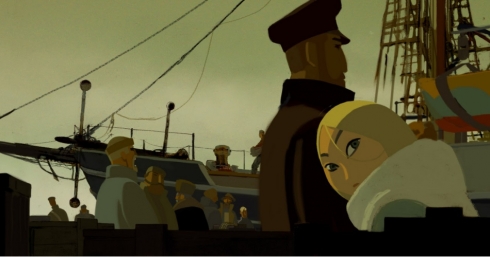 In today’s Cine-File listing, I have a new review of Long Way North, my favorite animated film of the year (barring Tower, a non-fiction film that mixes rotoscoped animation with live action). I’m reproducing the review in its entirety below:

This delightful French/Danish co-production, the directorial debut of one Remi Chaye, sneaks into the Gene Siskel Film Center just in the nick of time to claim the title of best new animated film to play Chicago in 2016. LONG WAY NORTH is a rollicking adventure story that centers on Sasha (voiced by Christa Theret and Chloe Dunn), a 15-year-old girl in 19th century Russia who defies the wishes of her aristocratic parents and sets out for the North Pole to look for her grandfather, an explorer who went missing there while on an expedition during the previous year. The grandfather’s reputation is at stake since his ship, the Davai, was supposed to be “unsinkable” and his ill-fated mission has branded him a laughingstock and a failure. While the story is alternately poignant and thrilling, and likely to give young viewers a genuine and welcome dose of grrrl power, the real star of the show is the beautiful hand-drawn animation; Chaye got his start in filmmaking as one of the layout artists on Jean-Francois Laguionie’s THE ISLAND OF BLACK M’OR (2004), which LONG WAY NORTH resembles both in its conception as an almost Herzogian young-adult adventure on the high seas as well as in its early comic-book style of illustration, where clean lines and broad, clearly separated planes of color create bold and indelible graphic images. LONG WAY NORTH will screen at the Siskel in both its original French-language version with English subtitles and in an English-dubbed version. Check the venue’s website for detailed information on the showtimes of each version. (2015, 81 min, DCP Digital) MGS

On Sunday, December 18, Transistor Chicago will host the first ever LIVE recording of my White City Cinema Radio Hour podcast. This event, which is open to the public and BYOB, will feature me talking with fellow critics Jason Coffman (Daily Grindhouse) and Daniel Nava (Chicago Cinema Circuit) about the year in movies. All three of us will discuss our top five favorite films of the year — with commentary — as well as engage in what is sure to be a lively discussion of the most encouraging and discouraging cinematic trends in 2016. WCCRH listeners may recall that Jason and Daniel were on my year-end show in 2015 and that, miraculously, none of us had any of the same titles in our personal top fives. Will that happen again this year? Show up to Transistor in Andersonville this Sunday night to find out! I’ll be bringing homemade peanut-butter cookies and beer.