Some random thoughts on the three different movies I’ve seen in the past three days at the same Evanston multiplex. 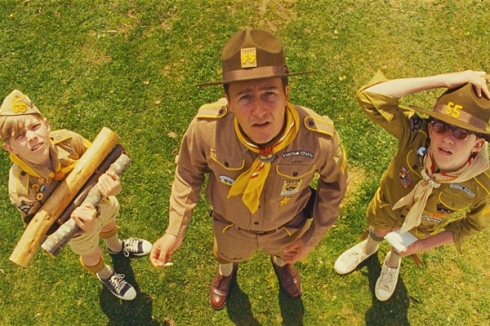 Although I still haven’t caught up with The Fantastic Mr. Fox, Moonrise Kingdom is easily my favorite Wes Anderson movie since Rushmore. While Anderson’s singular gifts as both writer and director are undeniable, there is something about the progression of his career, a tendency towards increasingly arch stylization, that has rubbed me the wrong way. Candy-box color cinematography and ostentatious set design may have always been important ingredients in the Anderson universe but it’s been a while since his impeccable sense of style has been balanced by anything as emotionally raw as Olivia Williams asking “How would you put it to your friends? Do you want to finger me?” Instead, we’ve gotten an overuse of Bill Murray at his smuggest, a grating sense of whimsy, a distasteful sense of class privilege, an egregious showing off of a bitchin’ record collection, and an approach to both composition and the direction of actors that occasionally resembles those science fair exhibits where butterflies are pinned to a styrofoam board. While Moonrise Kingdom doesn’t correct all of these problems for this Anderson agnostic, I’m happy to report that it does have a genuinely poetic feeling for the emotions of childhood, including an appealingly pervasive and piercing sense of melancholy that lurks just beneath the picture postcard exteriors. And while I could’ve done without some of the film’s more over the top elements (the flood, the lightning strike, the threat of lobotomy, etc.) there’s no denying that the lead child actors are amazing and that their odyssey at its most stirring takes on some of the hypnotic quality of The Night of the Hunter. Also admirable is how Anderson has created a scenario where his too-hip, classic rock “deep cuts” would finally sound appropriate, and yet he goes and loads up the soundtrack with Benjamin Britten and Hank Williams Sr. instead.

Teaching John Wayne is a funny thing. Two days ago I took a class to see a one day only screening of a new digital restoration of The Searchers at the Century 12 theatre in Evanston, easily the single best viewing of the movie I’ve ever had. While discussing it with my students afterwards, I was reminded yet again how, in spite of the fact that it is considered by cinephiles to be the quintessential Wayne performance, the quintessential John Ford film, the quintessential western, it just doesn’t play as well to the uninitiated. It is indeed the Wayne-starring movie that has consistently ranked the lowest when I ask my students to rate the films we’ve watched in class at the end of each semester on a scale from 1 – 10. (The Searchers is currently rated 6.8 on my “student tomato-meter,” followed by, in ascending order, Stagecoach with a 7.2, Fort Apache with a 7.5, Rio Bravo with an 8.0 and The Man Who Shot Liberty Valance with an 8.3)

What I’ve come to realize from this is that everyone who’s never seen a John Wayne performance has preconceptions about who Wayne is. The Duke vehicles that play the best are therefore the ones that run counter to their expectations. Students expect Wayne to be a stern, moralistic, patriarchal authority figure – someone who is essentially like their fathers or grandfathers, but probably more of an asshole. When they encounter the Wayne of Liberty Valance or Rio Bravo, what they find is someone graceful, super-relaxed and easily likable (Manny Farber’s great line about Wayne’s “hipster sense of how to sit in a chair” is apropos here). This of course is the true Wayne persona, the way he comes across in most films. When my students see The Searchers, which ironically is a very different type of performance for Wayne, it somehow conforms more closely to their negative preconceptions; they are offended by the racist, borderline-crazy Ethan Edwards, with his barely concealed rage towards Native Americans, because they cannot imagine a difference between Wayne and Edwards, nor, for that matter, between John Ford and Edwards. The idea that Ford is viewing Edwards from a critical distance, that the character is meant to be something other than a pure “hero” is difficult for many first time viewers to fathom.

Nonetheless, I relished this particular screening, which made visible many details that had always previously eluded me (even after dozens of viewings that include watching the superb Warner Bros. blu-ray on my 42 inch home television screen), such as the initials “C.S.A.” on Ethan’s belt buckle. That Ethan would be wearing this article of clothing, advertising the “Confederate States of America” three years after the Civil War ended, is a fascinating detail that speaks volumes about his character.

Woody Allen follows up the great Midnight in Paris with another winning, though lighter and frothier, tourist’s-eye-view-of-Europe concoction. The omnibus nature of this Roman holiday deliberately recalls the European anthology films that were popular in American arthouses during Allen’s formative years (including such quintessentially Italian movies as Vittorio de Sica’s Gold of Naples). And while the format is somewhat limiting when combined with Allen’s inherent weaknesses as a writer/director (some of the one-dimensional characterizations found in Paris that seemed excusable by that film’s deft sense of expedient storytelling are actually harder to take in the more bite-sized episodes on display here), Rome‘s frequently hilarious one-liners and general sense of good-spirited fun make this nothing less than a nice, refreshing summer entertainment. The best of the four stories, by far, involves Alec Baldwin as an architect who revisits, Ebenezer Scrooge-style, his younger self in the person of Jesse Eisenberg. Among the rest of the cast, Roberto Benigni is, as usual, about as welcome as a fart in church, which is fortunately more than compensated for by Penelope Cruz as a voluptuous hooker in a skin-tight red dress. Watching the Spanish Cruz playing a hot-blooded Italian is not only delightful but also fitting: no contemporary Italian actresses come as close as she does to inheriting the throne of Sophia Loren.