A Classic French Cinema Primer, pt. 1: Beyond the “Tradition of Quality”

The pre-Nouvelle Vague French cinema remains unjustly neglected in a lot of critical and cinephile quarters today, in part due to the contempt shown for it by the Nouvelle Vague directors when they were still critics for Cahiers du Cinema in the 1950s. Francois Truffaut’s famous dismissal of the French cinema’s “tradition of quality,” which he contrasted with the more ostensibly personal and cinematic films coming out of Hollywood during the same period, has given an unfortunate and lasting impression that French cinema in the early sound era was a barren field. I would argue that, since the birth of the movies, France has consistently been one of the three greatest film producing nations – along with the United States and Japan. This list, which encompasses the early sound era through the birth of the New Wave (a separate silent French cinema primer will be posted in the future) is meant to spotlight just a few of the most essential and exciting French movies made during this period.

The list will be broken into two parts. Today’s post encompasses the years 1930 – 1945. Part two, to be published later this week, encompasses 1946 – 1959. As a self-imposed, arbitrary rule, each half of the list will contain no more than two films by the same director.

Luis Bunuel’s first feature-length film is this hilarious Surrealist portrait of a man and a woman who repeatedly attempt to get together and have sex but are continually prevented from doing so by members of respectable bourgeois society. This is full of famously bizarre images, which still retain their awesome, funny, unsettling power today: a woman shoos a full grown cow off of the bed in her upper-class home, a groundskeeper arbitrarily shoots his son, a woman lasciviously sucks on the toe of a statue, a man throws various objects, including a burning tree, a bishop and a giraffe, out of a second story window. Like a lot of great works of Surrealist art, this was deliberately meant to counter the rising tide of fascism that was sweeping across Europe at the time. 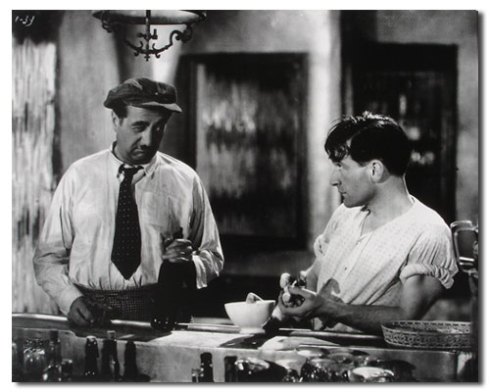 The first and best installment of Marcel Pagnol’s “Fanny Trilogy” (followed by Cesar and Fanny) is a sweet comedy/melodrama about the goings on in a Marseilles port-side bar. Marius is a young man who manages the bar owned by his father Cesar. He has an affair with local girl Fanny who, holding out hope for a marriage proposal, turns down the hand of the older, wealthier Monsieur Panisse. But, alas, like the song says, Marius’ life, love and lady is the sea. Hungarian born director Alexander Korda does a wonderful job of “opening up” Pagnol’s play, making a deft use of real Marseilles locations. Charges that the movie is “filmed theater” are misguided; Pagnol and Korda’s very subject is the theatricality inherent in human nature.

Mostly known today as the inspiration for Chaplin’s Modern Times, Rene Clair’s classic comedy follows the exploits of two escaped cons, one of whom becomes a factory owner and one of whom becomes a worker in the same factory. Is there any real difference, Clair asks, between a prisoner and a lowly factory worker? The equation between capitalism and criminality is a bit heavy handed but this is never less than a total visual delight, from the slapstick humor to Lazare Meerson’s stunning Expressionist-influenced art direction (which, atypical for a “foreign film” of the time, received an Oscar nomination).

Jean Vigo’s penultimate film, an unforgettable tribute to the anarchic spirt of youth, documents the rebellion of four pre-adolescent boarding school students and is based on the director’s own childhood memories. Vigo was way ahead of his time in blending experimental filmmaking techniques with narrative storytelling (check out the poetic use of slow motion during the pillow fight scene) and the end result is beautiful, strange, beguiling and unmissable.

L’atalante tells the story of a newly married couple, a barge captain and his provincial wife, and their tumultuous honeymoon-cum-cargo delivery trip along the Seine river. The simple boy-meets-girl/boy-loses-girl/boy-finds-girl plot is merely an excuse for director Jean Vigo and ace cinematographer Boris Kaufman to serve up an array of rapturously photographed images, all of which correspond to the emotions of his protagonists. In a legendary supporting role, Michel Simon’s portrayal of a tattooed, cat-loving first mate is as endearing as it is hilarious. Vigo’s final film is one of the cinema’s transcendental glories – endlessly rewatchable, always uplifting. 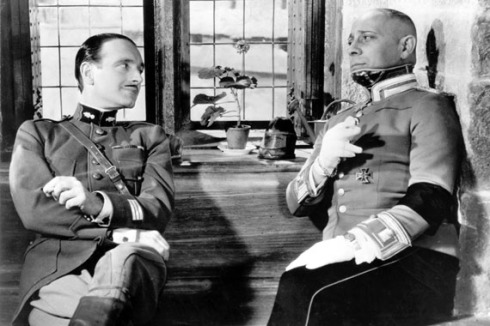 Grand Illusion is a comedy and a drama, a war movie and a prison break film and, finally, thanks to an 11th hour appearance by the lovely Dita Parlo, a very touching love story. There is also a healthy dose of social criticism in the story of an aristocratic German Captain (memorably played by Erich von Stroheim) who shows favoritism to an upper class French captive, indicating that the bonds of class can sometimes be tighter than those of nationality. But this is just one of many examples of Renoir explicating the “arbitrary borders” made by man in one of the few films that deserves to be called a true anti-war movie.

The Pearls of the Crown (Guitry)

In this witty, innovative, trilingual take on the history film, three narrators – an Italian, an Englishman and a Frenchman – each tell the story of how four pear-shaped pearls ended up in the British crown. Writer/director Sacha Guitry manages, in a head-spinning hour and forty one minutes, to trace the pearls from one owner to the next over five hundred years of European history, allowing hilarious cameos by famous figures like Pope Clement VII, Catherine de Medici, Henry VIII, Queen Elizabeth, Mary Stuart, Napolean and Queen Victoria. But in a movie whose real subjects are language and storytelling the pearls themselves are nothing more than a MacGuffin. Guitry himself plays the French narrator as well as three other characters in the flashback sequences; as he wryly notes, “We always lend our faces to the heroes of the story.”

One reason why French film critics were so quick to identify and appreciate American film noir in the 1940s is because it distinctly resembled, tonally and visually, many of the great French crime films of the late 1930s. One such film is Julien Duvivier’s fatalistic Pepe le Moko, the story of a charismatic Parisian gangster (wonderfully played by Jean Gabin) hiding out in the Algiers’ Casbah, and the police inspector who attempts to reel him in. Algiers, an equally interesting Hollywood remake with Charles Boyer and Hedy Lamarr, followed just one year later.

One of the high water marks of the movement known as Poetic Realism (under which many of the titles immediately preceding and following it on this list also fall), Le Jour se Leve has it all: working class characters – with Jean Gabin as the doomed hero and Arletty as his love interest, atmospheric locations, a tragic crime plot, poetic dialogue by Jacques Prevert, and taut direction by Marcel Carne. Also like a ton of great French films of the era, this was soon banned by the Vichy government on the grounds that it was “demoralizing.” Maybe so but sometimes hopelessness can be romantic too.

This is Jean Renoir’s masterpiece and the grandaddy of all films about an assortment of friends and couples getting together for a weekend-long party in the country. The “rules of the game” are the rules one must abide by in order to get along in society, which involves a considerable amount of dishonesty. Fittingly, the one character who is incapable of lying, the earnest, heart-on-his-sleeve aviator Andre, is also the character who dies “like an animal in the hunt.” Like the best works of Shakespeare or Chekhov, this humanist tragicomedy captures timeless truths about the inner workings of the human heart.

A series of anonymously written poison-pen letters are sent to various prominent citizens of a small French village. Chief among the targets of “The Raven,” the mysterious author’s pseudonym, is a doctor who is accused of adultery and performing illegal abortions. Both rumors and hidden secrets are brought to light by the letters, which threaten to tear the fabric of the community apart. Director Henri-Georges Clouzot made this for a German production company during the Nazi occupation of France. Sensing that the movie in some way allegorized them, the Nazis promptly fired Clouzot and banned the film. When the occupation ended, Clouzot was prohibited from making movies for an additional two years by the French government because he had collaborated with the Nazis! The director would go on to achieve much greater fame for The Wages of Fear and Les Diaboliques in the 1950s but this refreshingly dark and bitter thriller, a film far nastier than its Hollywood counterparts of the time, remains my personal favorite.

Robert Bresson’s second film features star performances (most notably a ferocious turn by Maria Cesares), an original diegetic musical score and relatively ornate dialogue written by none other than Jean Cocteau – all elements the director would soon eschew in the major movies for which he became best known. But Les Dames du Bois de Bolougne is still a terrific and very Bressonian film about a woman who hatches a revenge plot against her ex-lover that involves arranging a marriage between him and a prostitute. The timeless, dream-like atmosphere is alluring (the story takes place in the present but feels as if it could be taking place in the 19th century) and the ambiguously redemptive ending packs a wallop precisely because of Bresson’s de-dramatized treatment.

The pinnacle of the Marcel Carne/Jacques Prevert collaborations is this epic tale of doomed love set in the world of 19th century Parisian theater. Baptiste is a mime who falls in love with aspiring actress Garance. His shyness prevents their affair from being consummated and they go their separate ways until, years later, fate brings them back together for one last shot at romance. Both the behind the scenes look at theater and the depiction of 19th century France are lovingly detailed and passionately executed. This is sometimes referred to as a French Gone with the Wind but it’s actually much better than even that would suggest. One of the all-time great French movies.