CIFF scored a major coup by hosting the Chicago premiere of James Gray’s The Immigrant, a truly great new American film that is in the process of being tragically buried by its distributor The Weinstein Company (it won’t be released until 2014 and, even then, may go straight to video-on-demand). I was therefore particularly gratified to see this on the big screen. Gray’s masterful drama tells the story of Ewa (Marion Cotillard), a Polish immigrant who arrives at Ellis Island in the early 1920s along with a tubercular sister (who is promptly quarantined). After being threatened with deportation, Ewa reluctantly turns to a charming but ruthless burlesque show manager and pimp, Bruno (Joaquin Phoenix), who promises to help her out. Tragically, it isn’t long before Ewa is prostituting herself in the streets and finds herself in a doomed love triangle with Bruno and his cousin, a seemingly kindhearted magician named Orlando (Jeremy Renner). While this might sound like a familiar melodrama scenario, Gray consistently pushes the material in directions more challenging and rewarding than you might expect, profoundly exploring notions of love and forgiveness within a specific Polish/Catholic milieu, while also wringing from his story the emotions of grand opera. Gray’s fifth feature, his first period piece, is his most ambitious work to date. It is also his masterpiece.

This is the second film that the great Jafar Panahi has been able to make and have smuggled out of Iran after being banned from directing movies or giving interviews for 20 years. While the first, This Is Not a Film, dealt explicitly with Panahi’s legal plight and served as a provocative inquiry into what it means to “make a movie,” Closed Curtain deals with the same themes in a more oblique fashion: it begins with a political dissident/writer (co-director Partovi) and his dog, on the run from government authorities, seeking refuge in the house of a friend. The writer soon finds himself unwillingly sharing this space with a young woman who is also wanted by the police and who he fears may be suicidal. In the second half, Panahi — an old hand at self-reflexive trickery — appears onscreen as the Godlike creator of the events in the first half and asks if he has dreamed up these characters or if they have somehow dreamed him. Fans of the director can’t afford to miss this fascinating puzzle-film whose “mirror structure” may make you want to immediately watch it again — though it lacks the poignance and sense of urgency that made This Is Not a Film such an unexpected masterpiece.

Samantha (Najarra Townsend), a young woman feeling low after being dumped by her lesbian lover, gets drunk at a party and engages in a one-night stand with a strange man named B.J. (a sinister, out-of-focus Simon Barrett). The next day she fears she has contracted a sexually transmitted disease but, as her symptoms rapidly worsen, realizes to her horror that her body is actually rotting from the inside out. Writer/director Eric England, aided immeasurably by a brave lead performance by the game Townsend (the little girl from Me and You and Everyone We Know) and terrific, old-fashioned make-up effects, mines not only genuine terror from this Cronenberg-ian body-horror scenario but also a surprisingly rich vein of black comedy. The result is a fairly awesome low-budget shocker that creates and sustains a spirit of nasty fun that filmmakers with much higher budgets would no doubt love to buy; someone should really make Fede Alvarez, director of the lame, overhyped Evil Dead remake, watch this several times. There’s a certain kind of horror gem capable of rocking a late night film festival audience and, by God, Contracted rocked the Chicago International Film Festival. 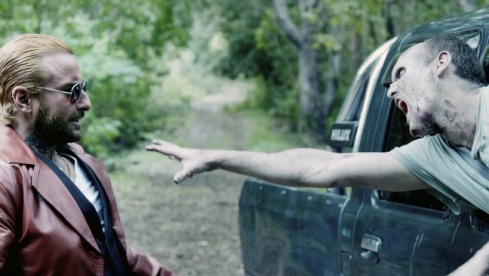 Two immature stoners, Hardik (Kunal Khemu) and Luv (Vir Das), accompany their slightly more responsible buddy, Bunny (Anand Tiwari), on a business trip to an island off of India’s Goa coast. There, amidst some gorgeous tropical scenery, they attend a rave party where the mass consumption of an Ecstasy-like drug has the unintended side-effect of turning those who take it into zombies. It’s then up to this unlikely trio — with a little help from a Russian mafioso (producer/star Saif Ali Khan with a blonde dye-job) — to save the day. Go Goa Gone has gotten a lot of press for being the “first Bollywood zombie movie” but I think it actually works best in its earliest stages when it’s merely a comedy dependent upon rapd-fire dialogue and word play. Once the reanimated corpses start piling up (aided by fairly shoddy make-up and CGI), it quickly becomes monotonous and repetitive — though at least there’s colorful cinematography and snappy music keep things lively. 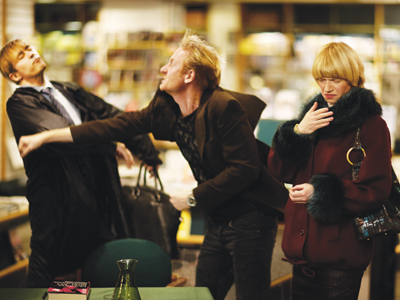 The lives of dozens of Stockholm denizens repeatedly criss-cross over the span of a few days in this Altman-esque ensemble comedy-drama. The most prominent plot lines involve a brother and sister (Martin Wallström and Julia Ragnarsson) — the adult children of a beloved, deceased Swedish novelist — and how they each cope with living in their famous father’s shadow. By the time the inevitable power-outage climax rolled around, bringing a couple of different couples together romantically, I must admit this had begrudgingly won me over. The first feature of former make-up artist Karin Fahlen, Stockholm Stories isn’t as good as Robert Altman at his worst but it’s certainly superior to sentimental trash like Love Actually (with which someone somewhere will no doubt compare it).