For the next few months I’ll be doing a “Spotlight on S. Korea” series, in which I discuss some of the most exciting films to come out of that country in recent years. First up is a look at Park Chan-wook’s JSA: Joint Security Area from 2000. 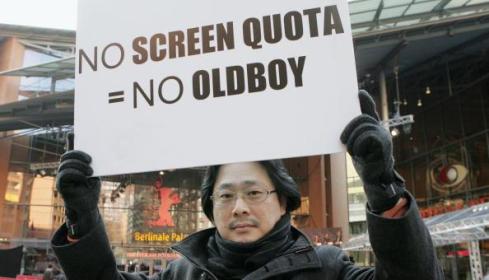 While recently suffering through a screening of Im Sang-soo’s interminable The Taste of Money, a ham-fisted melodrama whose trite sociological insights (money corrupts!) seem to only serve as a thin pretext for copious amounts of sex and nudity, I had to ask myself, “Is the S. Korean New Wave finally dead?” Is this really the best of the recent Korean movies upon which the likes of the Cannes Film Festival and IFC Films has to draw? Some would say that the death knell first sounded in 2006: that’s when the S. Korean government, as part of a new “free trade” agreement with the U.S., struck down a “screen quota” law that required theaters to show locally produced movies for at least 40% of the year. Yet great S. Korean films continued to be made over the next several years, even if they were less frequent in number than in the halcyon days of 2002-2005. It now seems, however, that the S. Korean cinema might really be going the way of the formerly mighty film industry of Hong Kong: among the top tier of Korean directors, several have recently tried their luck working outside of their native country for the first time (Kim Ji-woon with the poorly received Arnold Schwarzenegger-vehicle The Last Stand, Park Chan-wook with the superb but under-promoted Nicole Kidman-starring Stoker and Bong Joon-ho with the forthcoming international co-production Snowpiercer). Lee Chang-dong, arguably the greatest contemporary S. Korean director, has always worked at a slow pace, directing just three of his uniquely novelistic movies since his breakout success with Peppermint Candy in 1999. That leaves only the prolific Hong Sang-soo to keep the home fires burning with the dependable annual releases of his patented intellectual take on the rom-com. So now seems like a good time to look back at the remarkable burst of creativity that the S. Korean directors showed in the early 21st century.

Whenever I am lucky enough to teach contemporary S. Korean cinema in a class, J.S.A.: Joint Security Area is always the movie I screen first, even if it might not come first chronologically among the films I’ve chosen to show. This is because J.S.A.‘s political-thriller plot lays out the entire history of the conflict between North and South Korea in a way that is succinct, accessible and informative without ever being didactic. It is also ideal because it was directed by Park Chan-wook, who is probably the single most popular and critically acclaimed director, on an international basis, to come out of S. Korea since the 1990s. Park was born in Seoul in 1963. He majored in Philosophy at Sogang University, where he also started a movie club (and many critics have seen a dovetailing of these interests in his highly regarded, philosophically inflected “Vengeance trilogy”). It was while in college that Park first decided to become a film director, after attending a screening of Alfred Hitchcock’s Vertigo. Upon graduation, he worked as a film critic, then as an assistant director before he made his feature directing debut in 1992 with a movie entitled The Moon is the Sun’s Dream. Both this debut film and Trio, his 1997 follow-up, were met with critical and commercial indifference. J.S.A., his third movie, was released in 2000 and quickly broke all box-office records to become the highest grossing Korean movie of all time.

J.S.A. tells the fictional story of a shooting at the “Joint Security Area” on the border between the two Koreas, an incident allegedly perpetrated by a South Korean soldier, that has left two North Korean soldiers dead and another seriously wounded. Because this event inflames an already highly sensitive diplomatic situation, the Neutral Nations Supervisory Commission sends in a Swiss Army officer of Korean descent, Major Sophie Jang (Lee Yeong-ae, the future “Lady Vengeance”), to investigate. After interviewing participants on both sides of the incident and hearing conflicting accounts of what happened, Jang quickly realizes that nothing is what it seems. But who is lying and why? This present day story is intercut with lengthy flashbacks concerning the principles involved in the shooting — in particular, North Korean Sergeant Oh (the great Song Kang-ho) and South Korean Sergeant Lee (Lee Byung-hun). Without giving too much of the plot away, Park gradually leads viewers to realize that what both sides are trying to cover up is nothing more harmful than friendship, which pushes the story in directions both ironic and tragic. 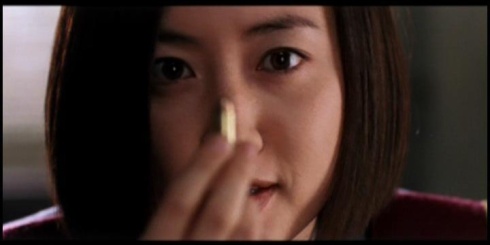 One of the things that surprised me the most when I started exploring S. Korean cinema years ago was the degree to which its filmmakers expressed a desire for reunification and reconciliation with the North, a country with which they are still technically at war. J.S.A., a movie without precedent, was widely acclaimed by S. Korean critics as well as audiences upon its first release. In fact, the only sector of S. Korean society that seemed to disapprove of the film was the military (whose members objected to a sympathetic portrayal of the N. Korean “enemy”). The movie’s plea for tolerance and peace was clearly a message that resonated far and wide in a country whose inhabitants have been raised to hate and fear a neighbor they know little about, despite sharing a common language and culture. Yet because film censorship laws had only been relaxed in S. Korea a few years prior to J.S.A. being made, it was a message that would not have been possible any earlier. Fortunately, Park Chan-wook was well-positioned to deliver such a message in making J.S.A. (not only as a young ambitious writer/director eager to bust taboos but also as a member of the Democratic Labor Party, the most progressive political party in his country).

One of the central ideas in J.S.A., posited, as is often the case with Park, in mostly visual terms, is the tragic notion that borders are man-made and therefore arbitrary. The motif of borders, whether physical or psychological (sometimes the division is within a single character), is one that recurs throughout S. Korean cinema and Park’s movies in particular. The notion of “being divided” seems almost ingrained in the Korean consciousness and Park fully explores the concept here, occasionally with a dash of absurd humor, in the film’s many bifurcated frames. This is nowhere better illustrated than in the final shot of J.S.A., a doozy that haunts in its evocative ambiguity: in a flashback to an event that occurred midway through the movie, Park allows his camera to pan across and zoom in and out of — Ken Burns-style — a black-and-white photograph of all four of the film’s main characters in happier times; two soldiers from the North and two from the South, each standing on opposite sides of the border that runs through the Joint Security Area, are united together in the same frame yet separated from each other by a government-enforced line of demarcation — a moment that is frozen in time forever. 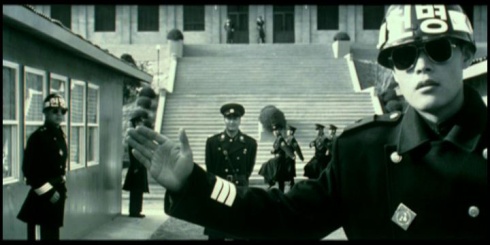 J.S.A.: Joint Security Area is available in a serviceable edition on DVD from Palm Pictures. An upgrade to Blu-ray, a format on which all of Park’s subsequent movies are available, would be most welcome.

Below is a chronological list of 21 key S. Korean New Wave movies (with commentary) that I compiled to hand out at a Facets Multimedia screening of Save the Green Planet earlier this year. Below the list is a link to a video of the lecture I gave prior to the film.

Christmas in August (Jin Ho-Hur, 1998) – Exquisite melodrama about the romance between a terminally ill photographer and one of his clients. 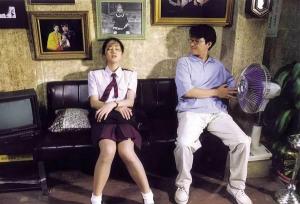 Nowhere to Hide (Lee Myung-se, 1999) – This outrageous action movie is basically one long chase between two cops and a killer. An early scene where an assassin plies his trade to the strains of the Bee-Gees’ “Holiday,” amid yellow autumn leaves and a gently falling rain, is unforgettable.

Peppermint Candy (Lee Chang-dong, 1999) – Forget Memento and Irreversible, here’s the original “edited in reverse” movie – a tour de force of filmmaking that begins with the suicide of a thirty-something businessman, then skips backwards over the previous twenty years of his life to show the personal tragedy of one man’s loss of innocence and corruption set against the sweeping backdrop of S. Korea’s tumultuous recent history.

Barking Dogs Never Bite (Bong Joon-ho, 2000) – Wonderful offbeat comedy/romance and an auspicious debut from one of the most significant Korean directors of our time.

Chunhyang (Im Kwon-taek, 2000) – Folk opera/musical from one of the “old masters” of S. Korean cinema.

Failan (Song Hae-sung, 2001) – I defy you to see this unique gangster movie/melodrama hybrid and not weep by the time it’s over.

Turning Gate (Hong Sang-soo, 2002) – Comedy/drama about a young man’s quest for love that marries the formalism of Antonioni with the naturalistic performances of Cassavetes.

Sympathy for Mr. Vengeance (Park Chan-wook, 2002) – The first entry in Park’s essential “Vengeance trilogy” is also the most austere and tragic.

Memories of Murder (Bong Joon-Ho, 2003) – Like a Korean Zodiac, this tells the riveting true story of a police investigation into a series of unsolved murders. 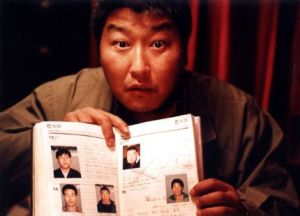 Save the Green Planet (Jang Jun-hwan, 2003) – The story of a blue-collar worker convinced that his former boss is an alien intent on destroying the human race, this outrageous and provocative black comedy reflects political anxieties dating back to South Korea’s pro-democracy protests in the 1980s while also serving as a prescient ecological fable on a more universal scale.

A Tale of Two Sisters (Kim Ji-woon, 2003) – Mixture of psychological and supernatural horror that effectively conjures up an atmosphere of dread from the first frame to the last.

Oldboy (Park Chan-wook, 2003) – Excellent freak-out revenge movie with a supremely ironic “happy ending” that lingered in my imagination long after it ended.

3-Iron (Kim Ki-duk, 2004) – A nearly silent love story that starts out as a work of realism and then slowly, almost imperceptibly, enters a world of purely poetic metaphor. Hypnotic and amazing.

Secret Sunshine (Lee Chang-dong, 2007) – A widow moves with her son to the hometown of her recently deceased husband only to encounter further tragedy in this thematically complex, novelistic character study from the great writer/director Lee Chang-dong.

The Chaser (Na Hong-jin, 2008) – A generic serial killer plot is given a refreshingly original spin by adding an abundance of expertly executed foot-chases in this superior thriller. 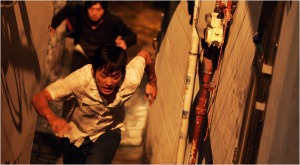