A dozen titles from Australia and New Zealand, two sister-countries whose local film industries didn’t really take off until the 1970s.

This early entry in the remarkable Australian New Wave of the 1970s is easily one of the most disturbing films I’ve ever seen — not so much because of any “extreme” content (although that is certainly present in the kangaroo-massacre montage) but rather because of the way Canadian director Ted Kotcheff paints such a convincingly bleak picture of self-destructive masculinity, moral degradation and human nature in general. The film begins with a rural schoolteacher (Gary Bond) embarking on a summer holiday. While staying overnight in a nearby mining town en route to visit his girlfriend in Sydney, the teacher becomes persuaded by the locals to engage in their favorite pastimes of binge-drinking and gambling, which leads to an unintended week-long stay of increasingly debauched and animalistic behavior. The performances, especially by Bond and Donald Pleasance as a sexually ambiguous doctor, are excellent and Kotcheff sustains an almost unbearably tense and unsettling atmosphere from beginning to end.

A man takes his two young children — a teenage girl (Jenny Agutter) and her pre-adolescent brother — on a picnic in the Outback, goes berserk without warning by trying to shoot them and then turns the gun on himself. Stranded, the children soon meet up with a 16-year-old Aboriginal boy (David Gulpilil) on a “walkabout,” a monthlong coming-of-age ritual in which he is separated from his tribe. While the Aborigine leads the children safely back to civilization, they are nonetheless incapable of truly understanding one another, and their miscommunication inevitably leads to tragedy. The solo directing debut of British cinematographer Nicolas Roeg, Walkabout is a visually stunning and thematically rich meditation on the clash between civilization and nature, the loss of childhood innocence and the first stirrings of burgeoning sexuality. In spite of its darker elements and a liberal use of nudity, I think this beautiful, hypnotic film is ideal to show to children. 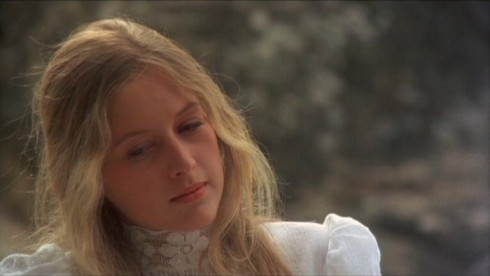 Picnic at Hanging Rock is a haunting, enigmatic film — often erroneously referred to as being based on actual events — about the disappearance of three female college students and a middle-aged teacher during a Valentine’s Day picnic in the year 1900. Like Antonioni in L’avventura, director Peter Weir refuses to provide a concrete explanation for their disappearance while simultaneously hinting at several possible interpretations (including a supernatural one). Trying to figure out “what happened” is ultimately irrelevant, however; this is really about the foolhardiness of British settlers trying to impose Victorian values on an alien landscape, which is made most obvious in a parallel plot about the school’s repressed headmistress relentlessly punishing a student for expressing a schoolgirl crush. But Picnic at Hanging Rock is also a true cinematic wonder: it is finally the striking images of those young women — immaculately attired in white dresses, walking in slow-motion among primordial rock formations — that will stay with me forever. Contemporary viewers may want to look sharp for multi-Oscar nominee Jacki Weaver in a small role as a maid.

The Chant of Jimmie Blacksmith (Schepisi, 1978)

It is remarkable how many Australian filmmakers of the 1970s were able to deal honestly with their country’s painful racist and colonialist past. The Chant of Jimmie Blacksmith may be the most impressive Aussie film in this cycle; based on a novel by Thomas Keneally, which was itself based on a true story, it charts the adventures of a half-caste Aboriginal title character whose axe-murdering of an entire family is seen as stemming from a lifetime of having endured condescension and outright abuse at the hands of his white employers. This is not, however, a simple polemic; the murders are graphically depicted (one particular shot involving an egg yolk is genius in its disturbing detail), which is one of many ways director Fred Schepisi refuses to make us fully sympathize with the title character, even while he takes great pains to explain Blacksmith’s behavior. A tough, complex and essential movie.

What a delight it was for me to discover this little-known gem of a film, the auspicious debut of director Philip Noyce. Newsfront lovingly recreates the lives of newsreel cameramen living in Sydney from the late 1940s through the mid-1950s — highlighting their rivalries with each other and their clashes with the top brass, the conflicts in their family lives and, most importantly, the challenges posed by working “in the field,” which makes cinematography seem almost as adventurous a profession as archaeology was for Indiana Jones. I especially loved how distinctly Australian it all seems (with genuine newsreel footage of important events being seamlessly intertwined with the fictional scenes) and how, like David Fincher did in Zodiac, Noyce captures the passage of time through a careful, nuanced selection of detail. 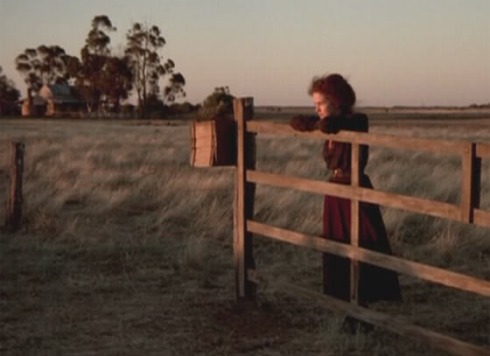 Gillian Armstrong’s terrific adaptation of Miles Franklin’s celebrated novel depicts the life of a precocious young woman with literary ambitions living in rural Australia at the turn of the 20th century. Judy Davis, impossibly young and fresh-faced and, as Sailor Ripley might say, “dangerously cute,” is Sybylla, the headstrong author-surrogate who has to choose between marrying the man of her dreams (Sam Neill) and keeping her independence to pursue her career as a writer. This witty, poignant film is much less dark than any of the other period piece movies on this list and yet it still manages to deviate from the conventions of cinematic fairy tales in a way that is immensely gratifying and should prove empowering to young women.

George Miller’s 1981 action-movie masterpiece is the best and most influential of the post-apocalyptic Eighties trend. Even more impressive is the fact that he did it all on a relatively meager budget of $2,000,000 — with old-fashioned (i.e., “real”) stunts and exceedingly clever production design in which an assortment of 20th century detritus is reconfigured in surprising ways (e.g., punk rock fashions and S&M gear happily co-exist with pieces of athletic uniforms). The film is set in the future, when gasoline is an even more precious resource than it is today, and concerns a former cop (Mel Gibson, reprising his role from the non-post-apocalyptic Mad Max) helping a gasoline-rich colony fend off attacks by a gang of marauding bandits. The climactic action set-piece, a long chase involving many different types of vehicles barreling through the barren Australian outback, takes up most of the second-half and ranks as one of the most exhilarating such scenes ever captured on celluloid.

John Duigan’s fine coming-of-age film, set in New South Wales in the early 1960s, is extremely impressive because of such underrated and low-key virtues as sincerity and modesty. The plot centers on Danny (the immensely appealing Nick Cave look-alike Noah Taylor), a 15-year-old-boy whose heart is broken when his childhood friend and secret crush Freya (Loene Carmen) falls for Trevor (Ben Mendelsohn), a slightly older, thuggish rugby player. The gorgeous locations and effective use of period songs (including Gene Pitney’s “Liberty Valance”) effortlessly conjure a specific time and place, which is bolstered by solid, naturalistic performances and a nostalgic story that avoids sentimentality and cliche at every turn. Contemporary Hollywood screenwriters could certainly learn a thing or three from watching this.

This hilarious alternate-history farce imagines Albert Einstein (writer/director Yahoo Serious) as a young man from a Tasmanian farm who invents the theory of relativity in 1905 as a means of solving his father’s challenge to add bubbles to beer — and thereby making it tastier! It isn’t long afterwards that the budding young scientist invents surfing and rock and roll, the latter of which he describes as a “scientific musical theory based on the human heartbeat.” He also romances Marie Curie, saves Paris from being destroyed by an atom bomb and, most endearingly, saves some kittens from being baked in a pie. Serious, wire-thin and sporting troll-doll hair, is as physically expressive in his mannerisms as he is understated in his line readings. As a director, he’s also a great visual stylist like the great filmmaker-performers of yesteryear (Keaton, Chaplin, Tati, etc.). While Young Einstein, Serious’ first feature, was an unexpected global success, his subsequent films unfortunately were not and he has been very quiet since his last, Mr. Accident, in 2000. 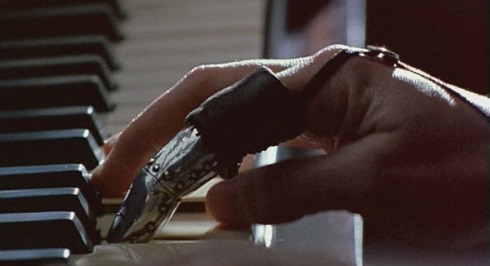 Jane Campion’s international breakthrough was this tough and beautiful feminist love story, set in the mid-19th century, about Ada (Holly Hunter), a mute Scottish woman and single mother whose father “arranges” her marriage to an English expatriate farmer (Sam Neill) on the western coast of New Zealand. Shortly after arriving at her new home, however, Ada embarks on an unlikely romance with George (Harvey Keitel), another Scottish emigre and oddball who has “gone native” by tattooing his face and living among the Maori. The melodramatic plot twists that ensues will whip your emotions into a frenzy as expertly as the finest gothic novels of the 19th century, aided in no small part by Campion’s gorgeous mise-en-scene, a quartet of excellent performances (the three mentioned above plus Anna Paquin’s turn as Ada’s daughter) and Michael Nyman’s rhapsodic, piano-driven score. One of the best films of the Nineties. 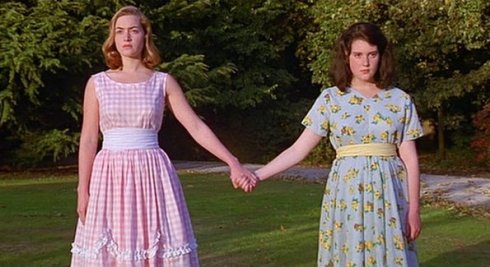 The career of New Zealand director Peter Jackson can be broken into at least couple distinct phases — with many of the devotees of his early gore-fests unappreciative of his later big budget Hollywood work, while many devotees of his Tolkien adaptations remain ignorant of such delirious low-budget items as Bad Taste and Meet the Feebles. Heavenly Creatures, a black comedy/psychological horror film from 1994, effectively serves as a bridge between these worlds and also remains my favorite of the director’s works to date: it tells the true story of the unholy friendship between two imaginative teenage girls, Juliette Hulme (Kate Winslet) and Pauline Parker (Melanie Lynskey), who conspire to kill the latter’s mother in 1950s Christchurch. In spite of a certain cartoonish stylization in terms of dialogue and performance, this convincingly illustrates how two people can carry out a plan that, had they never come together, would have remained nothing more than a dark fantasy in the mind of each individually.

While many consider the “western” a uniquely American genre, there have been plenty of great Australian examples; this is due in part to the lawless, frontier-like region of the Outback in the late 19th and early 20th centuries as well as the conflict between European settlers and native Aborigines, which can be seen as analogous to the Indian Wars so often depicted in American westerns. The Tracker is a particularly good example of an Australian western and one that uses the form to make a powerful statement about racism. In 1922, three white policemen and their subservient Aboriginal “tracker” follow another Aboriginal man suspected of murdering a white women deep into the Australian brush. Throughout the journey, the power dynamics dramatically shift between this quartet of disparate characters, leading to a conclusion as unpredictable as it is sublime. What I especially like about this film (in addition to David Gulpilil’s always-welcome presence as the title character) is the way director Rold de Heer uses primitive folk-art style paintings as well as the songs of Aboriginal singer Archie Roach as additional texts to comment on the narrative. A powerful allegorical movie that engages the heart as much as the mind.