Now Playing: The Cabin in the Woods 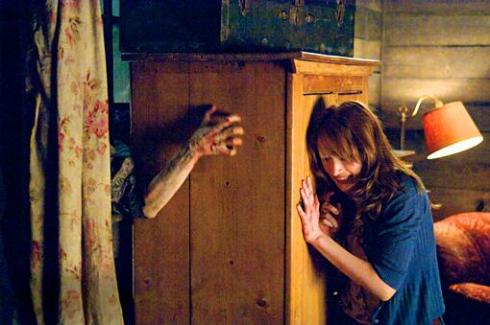 The bottom line: when it comes to self-reflexivity, Goddard is no Godard.

A few years ago, I saw The Pixies in concert during one of their reunion tours. It was clearly a cash grab for all of the band’s members, whose post-Pixies musical careers had stalled but who were nonetheless vocal about maintaining their integrity: they had no problem playing reunion shows but also had no intention of soiling their legacy by recording a new album together. The official t-shirts being sold at the concert were emblazoned with the words “The Pixies Sell Out Tour.” I remember seeing that and thinking, “Just because they act aware of it, doesn’t make it any less true.” I had a similar reaction to The Cabinet in the Woods, which is ostensibly a satire of cliched horror movies. Unfortunately, the self-awareness that the film’s makers (writer/director Drew Goddard and co-writer/producer Joss Whedon) bring to the project does nothing to disguise the fact that this is itself little more than yet another cliched horror movie.

Most reviews of The Cabin in the Woods have made it a point to be “spoiler free,” which is bizarre considering that the film’s master premise is more or less revealed in the opening scenes: five one-dimensional archetypal horror movie characters, clearly meant to represent a cross-section of mainstream society, travel to a cabin in the woods for a weekend getaway. They are: the jock, the stoner, the slut, the virgin, and the minority (the last of whom is disingenuously referred to as “the scholar” in the film’s dialogue but this multi-racial character should be recognized as the “token black guy” by any true horror movie aficionado). Upon arrival, they are killed off one by one by “the other,” who, in this specific instance, happens to be a band of redneck zombies. The only thing differentiating The Cabin in the Woods from other horror films with an identical plot is that the actions of these protagonists are continually being manipulated and recorded by another group of characters who are meant to represent both filmmakers (one character is even named “The Director” in the credits) as well as film audiences. The only real surprise is why any of this is happening, which I won’t spoil, although I would argue that in the end it doesn’t really matter.

The twist here, that the technicians and corporate types who are recording the events in the film are doing their damnedest to make sure the protagonists observe all of the “rules” of the typical horror movie (i.e., the members of the group split up instead of stick together, the virgin dies last, and blah, blah, blah), is less clever than the filmmakers think; Goddard and Whedon are operating on the mistaken belief that merely acknowledging horror conventions is the same thing as genuinely satirizing, critiquing or subverting them. Therefore, in between the kills, each character predictably does and says exactly what is expected of him or her and nothing more (e.g., the stoner talks about half-baked conspiracy theories, the slut and the jock have sex, etc). The truth is that every horror movie I’ve seen in recent years about a “cabin in the woods” has been more original than The Cabin in the Woods, including Dead Snow, Rabies and Tucker and Dale vs. Evil. The last of these, in particular, delights precisely because the target of its satire isn’t so much contemporary horror (which has already been satirized to death anyway) but a far worthier target: the irrational fears and prejudices that non-southerners have about the rural south. Now that’s subversive.

The one aspect of The Cabin in the Woods that I think works unreservedly is the funny and shocking climactic scene where a cornucopia of monsters representing various horror subgenres are loosed upon the technicians and corporate types who are keeping them imprisoned in underground cells beneath the cabin in the woods. These monsters, including a ballerina with a face consisting entirely of circular rows of teeth, a werewolf, a witch, a giant cobra and a “merman,” are as imaginative and as lovingly detailed as what one would expect to find in a film by Guillermo del Toro. But even here a problem arises: I can’t help but feel the entire enterprise would have been so much more interesting if any one of these magnificent creatures had been responsible for killing off the heroes from the start – instead of those generic and forgettable redneck zombies.