An Italian Cinema Primer: From Neo – to Psychological Realism, pt. 2

A continuation of the list of essential Italian movie titles spanning the movements of Neo – and Psychological Realism that I began last week. This part of the list encompasses films released from 1960 – 1969.

A woman, Anna, mysteriously disappears while on a yachting trip with friends. The missing woman’s lover, Sandro (Gabriele Ferzetti), and her best friend, Claudia (Monica Vitti), spend the remainder of the movie looking for her but their search merely becomes the pretext for a love affair as they promptly proceed to forget about her. L’avventura‘s slow pace and lack of narrative resolution have driven many viewers up the wall (including me the first time I saw it) but Michelangelo Antonioni’s stately compositions and underlying philosophical themes have a power as awesome and mysterious as the ocean he so lovingly photographs in the film’s majestic first third. L’avventura‘s 1960 Cannes premiere was one of cinema’s game-changing moments.

Although he had made several formidable movies in the decade preceding it, La Dolce Vita marked the true beginning of Federico Fellini’s art as it would come to be known, loved and imitated: a stylistically baroque, excessive, grotesque depiction of life-as-a-carnival in which the director seemed to hurl at the screen all of his ideas about life, love and art with little regard for self-censorship. Marcello Mastroianni has movie star charisma to burn as a hedonistic yellow journalist struggling to come to grips with the modern world, the first of many times he would play the role of Fellini’s idealized alter ego.

The amazing first film of Pier Paolo Pasolini, loosely adapted from his own acclaimed novel A Violent Life. Pasolini follows the title character, a pimp played by the remarkable non-actor Franco Citti, through the slums of Rome in a style that could be said to harken back to Neorealism if not for the inclusion of a bold dream sequence and the director’s insistence on viewing Accatone as a saint (most obviously through the repeated use of Bach’s St. Matthew Passion chorus on the soundtrack). One of the all-time great directorial debuts.

Life imitates art and art imitates life in Fellini’s masterpiece, a thinly-disguised autobiographical study of a movie director (Mastroianni again) fighting “director’s block.” Guido Anselmi struggles to complete his latest film, a science fiction epic, as fantasies, dreams and childhood memories collide (most of which pertain to Guido’s struggles with religion and/or women). Fellini never again recaptured the greatness on display here (even though he repeatedly mined similar subject matter) but as far as career peaks go, 8 1/2, quite simply one of the most influential movies ever, remains a dizzying high.

Yes, the band got their name from here. Mario Bava’s superb anthology film tells three unrelated spine-tingling tales of terror (a literal translation of the original Italian title is “Evil Has Three Faces”). In the first, an early giallo, a woman alone in her apartment receives threatening phone calls from a mysterious stranger. In the second, an elderly vampire attempts to “turn” his entire family. In the third, a nurse is haunted by the image of a dead woman after stealing her ring. Serving as master of ceremonies is none other than Boris Karloff who also plays the vampire, with great poignance, in the second story. What really impresses here is Bava’s visual storytelling: he conveys an atmosphere of dread through a bold and eerie use of color (dig the purple), camera movement and composition. One of the great horror movies.

Few directors have been as adept at capturing physical beauty as Luchino Visconti and The Leopard is his most beautiful and perfectly realized film. Adapted from Giuseppe Tomasi di Lampedusa’s equally great novel, Visconti’s movie tells the story of Prince Don Fabrizio Salina (a fittingly regal and masculine Burt Lancaster) who maneuvers through the political tumult of 1860s Sicily, which includes marrying his revolutionary-minded nephew Tancredi (Alain Delon) to the beautiful, newly upper-class Angelica (Claudia Cardinale). The Leopard‘s climactic ball scene, a virtually non-narrative 40 minute visual feast, is one of the glories of the film medium. The Criterion Collection’s blu-ray release of this title single-handedly justifies the purchase of a blu-ray player.

The Gospel According to St. Matthew (Pasolini, 1964)

Pasolini’s best-loved film is this unorthodox but reverential version of the Christ story in which the life of Jesus (hauntingly portrayed by non-actor Enrique Irazoqui) is told in straightforward, realistic fashion – from his birth in Bethlehem to his revolutionary political teachings to his crucifixion, death and resurrection at Golgotha. Some critics have detected a Marxist slant to Pasolini’s take yet this is a movie virtually anyone, even the Pope, could love. The impressively eclectic soundtrack features Bach, Mahalia Jackson and Blind Willie Johnson.

Michelangelo Antonioni’s first color film features one of the most expressive and purposeful employments of color cinematography in the history of cinema, where the director notoriously spray painted entire fields in order to achieve the appropriate psychological mood. Red Desert begins shortly after Giuliana (Monica Vitti in her prime), the wife of a wealthy industrialist has suffered some kind of unspecified mental breakdown. Seemingly unable to adapt to the modern world, the distressed woman is taken advantage of by Zeller (a dubbed but very fine Richard Harris), a business associate of her husband. Arguably the apotheosis of Antonioni’s career (at least as a work of pure visual storytelling), this is the last Italian movie he would make for many years.

If L’avventura lamented the displacement of traditional social institutions (marriage, church, family, etc.) by eros in the modern world, Fists in the Pocket goes a step further and allegorizes post-War Italy as a murderous, incestuous family presided over by a blind, religious mother. Lou Castel, a Colombian actor best known for his work in Italian and French movies, burns up the screen as Alessandro, a mentally disturbed young man who is driven by ostensibly altruistic reasons to murder his family members one by one. A harrowing debut film by the prodigiously talented writer/director Maro Bellocchio.

The Good, the Bad and the Ugly is the definitive “spaghetti western,” a popular subgenre of American-set westerns made in Europe, usually Spain, by a typically Italian cast and crew. This is the third installment of a trilogy (preceded by A Fistful of Dollars and A Few Dollars More, both of which also starred Clint Eastwood) but this Hollywood co-production works perfectly as a stand-alone film. The plot concerns the misadventures of the title trio, all of whom are in search of $200,000 in buried gold, set against the backdrop of the American Civil War. Director Sergio Leone’s “operatic” visual style combines with Ennio Morricone’s legendarily innovative score to lend The Good, the Bad and the Ugly a singular tone that is at once comical, cartoonish and, in Dave Kehr’s astute phrase, “inexplicably moving.” 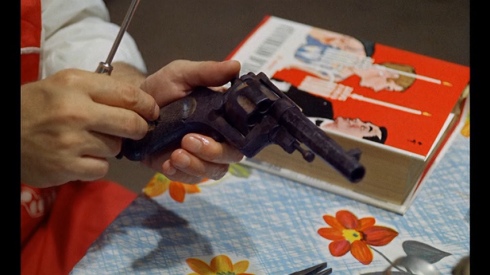 Marco Ferreri’s bat-shit crazy black comedy is very much a product of the “anything goes” 1960s: it captures one long night in the life of a bored bourgeoisie (the always terrific Michel Piccoli in what is nearly a one-man show) as he engages in gourmet cooking, infidelity and murder. Along the way, he paints a pistol red with white polka dots, listens to some groovy music and projects and interacts with home movies on his living room wall. I respect this experimental film more than I love it but, as an example of cinema at the end of its tether, I can’t think of a better way to put an end to this particular list of movies.