The 17th edition of the Gene Siskel Film Center’s European Union Film Festival kicks off this Friday, March 7, and runs through April 3rd. While the 2014 EU Film Fest may lack the brand-name auteurs of last year’s edition (e.g., Resnais, Bellocchio, Von Trotta, etc.), it more than makes up for it with a significant number of substantial works by exciting younger directors, some of whom are represented by their first features (including Ramon Zurcher’s astonishing The Strange Little Cat, my favorite film of the entire festival). There are extra credit opportunities available for my students if they attend any of the EU Film Fest screenings. Please see the extra credit page of your course website for more details. The full lineup (along with ticket info and showtimes) can be found here:

Below are previews for four of the most noteworthy films playing in the festival’s first week. I will be including previews of four more titles next week as well.

Winner of the Golden Bear at the 2013 Berlin Film Festival, Calin Peter Netzer’s take on the intersection of familial love and thorny moral choices plays at times like a parody of a Romanian New Wave movie: there’s a tragic inciting event, unusually jittery camerawork, extreme realism in the dialogue and acting departments, a complete absence of non-diegetic music, and an almost clinical examination of bureaucratic processes. The tragedy revolves around an elderly mother’s attempts to prevent her ungrateful son from being charged with manslaughter after he is responsible for a car accident that kills a pedestrian. The scenario is sufficiently complex and intelligent, and Luminita Gheorghiu gives a tour de force performance as the domineering mother, but Netzer’s style of shooting and cutting is overly busy at best and visually sloppy at worst: his handheld camera continually jumps back and forth across the 180-degree axis, even during basic dialogue scenes, robbing his film of a coherent sense of place and sapping the drama of its power. I should point out that the greatest of the contemporary Romanian directors, Corneliu Porumboiu, is also represented in this festival with his When Evening Falls On Bucharest or Metabolism; alas, I had not yet seen it as of press time. Child’s Pose screens on Saturday, March 8. 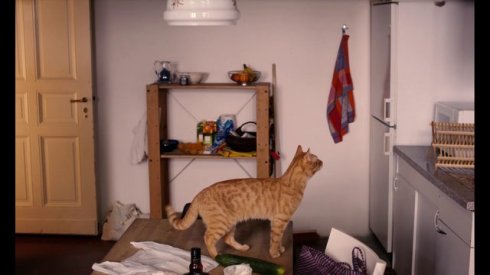 Impossible to accurately describe, the strikingly original and primarily non-narrative The Strangle Little Cat is the best German film I’ve seen in years. This is the kind of movie that has no stars, no name director and no trendy subject matter, yet is destined to win a large cult of fans based solely on word of mouth in regards to how amazing it is as a piece of filmmaking. The members of an extended family gather together in an apartment and, over the course of a single day, engage in various activities: fixing a washing machine, conducting an experiment with orange peels, sharing a meal, etc. Like a miniature version of Jacques Tati’s Playtime, however, this movie is really about space and time, order and chaos, images and sounds, and the relationships between people and objects. Everything seems precisely choreographed yet elements of chance undoubtedly come into play, especially where the family’s cat and dog (the ultimate non-actors) are concerned. Several of the characters tell mundane stories, like one where a woman describes a man accidentally touching her foot with his in a movie theater, that are then illustrated by flashback sequences — even though nothing about these stories seems momentous enough to warrant the use of the flashback technique. This in and of itself becomes hilarious, and strangely poignant, like much of the rest of the film. A deceptively intimate masterpiece of cosmic wonder, The Strange Little Cat screens on Saturday, March 8 and Wednesday, March 12. 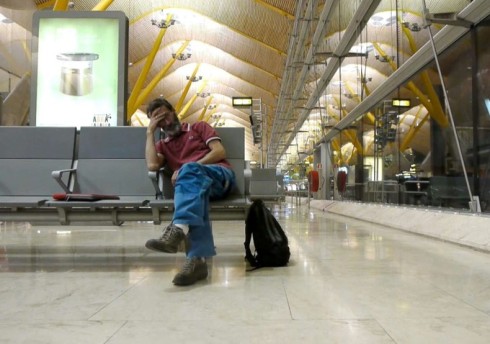 Director Joaquin Pinto, a former associate of Manoel de Olveira and Raul Ruiz, trained an intimate digital camera on himself and his partner Nuno Leonel for an entire year. The result is this formidable essay film in the vein of Chris Marker that also functions as a testament to the continuing importance of Portuguese art cinema. Pinto’s main subject is his experience taking experimental drugs designed to combat HIV and Hepatitis C, both of with he has been living with for decades. Along the way, Pinto provides poetic and philosophical reflections via voice-over narration to accompany scenes of him and Leonel visiting the hospital, playing with their dogs, working on their farm and even making love. A good example of Pinto’s wit and broad frame of reference can be found in a scene where he’s exploring a cave and intones that “We are living through sad times. In the shadow of the Flintstones, and of a doctor obsessed with the sexuality of the Viennese bourgeoisie.” The most moving aspect of this doc, however, is the use of insert shots of insects and animals (a yellow jacket eating a hamburger, a dragonfly at rest, a slug crawling through the mud, a bee expiring), all of which underscore the theme of the ephemeral nature of existence. Having said all that, I’m not sure the two hour and 44 minute running time is entirely justified. What Now? Remind Me screens on Saturday, March 8 and Wednesday, March 12.

Ida, the first movie I’ve seen by the well-regarded Polish director Pawel Pawlikowski, piqued my interest mainly because of the truckload of awards it took home from last year’s film festival circuit (including the prestigious FIPRESCI International Critics Award in Toronto). It’s a good movie but I don’t think it’s quite as good as its reputation suggests. On the plus side, the black-and-white cinematography is austerely beautiful, the performances are uniformly excellent and John Coltrane figures prominently on the soundtrack. On the other hand, the original screenplay (written by Pawlikowski and Rebecca Lenkiewicz) recycles a lot of ideas familiar from other European art films: the novitiate nun who questions her resolve on the eve before taking her vows, an investigation into a family history shrouded in secrecy, the revelation of shocking war crimes related to the Nazi Occupation, etc. This is well done for what it is and will probably reward those with a vested interest in the subject matter; just don’t expect anything that feels particularly vital or new. Ida screens on Sunday, March 9 and Wednesday, March 12.