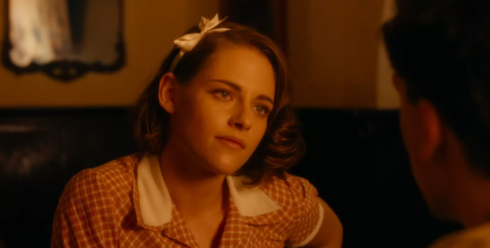 I wrote the following appreciation of Kristen Stewart’s performance in Cafe Society for Time Out Chicago. It should appear on their website later today:

Like many latter-day Woody Allen films, Café Society is a mixed bag. Genuine hilarity coexists with jokes that fall flat, scripted dialogue alternates between the reasonably naturalistic and the tone deaf, and acting is all over the map. The film’s saving grace is a lead performance by Kristen Stewart, so winning in its “casual complexity and low-key intensity” (to borrow the subtitle of a recent Stewart profile in Film Comment by Northwestern professor Nick Davis) that it single-handedly elevates Café Society to the status of essential viewing for the summer movie-going season.

While Stewart’s unique brand of underplaying sparked criticisms that she was “wooden” and “unconvincing” in the Twilight saga and other early films, what seemed like weaknesses became strengths as soon as the young actress began working with significant directors. Olivier Assayas’ Clouds of Sils Maria is an obvious turning point: as a sexually ambiguous personal assistant, Stewart not only held her own but excelled in lengthy dramatic scenes opposite the great Juliette Binoche, and she picked up prestigious Cesar and New York Film Critics Circle awards for her efforts.

In Café Society, as a down-to-earth receptionist caught in a love triangle with a powerful Hollywood agent (Steve Carrell) and his enterprising nephew (Jesse Eisenberg), Stewart seizes the chance to show off new colors in her palette. She proves adept at both screwball-style comedy (note the Irene Dunn-like way she throws a pregnant pause into the line “You have a deer-in-the-headlights…quality”) and poignant drama – when the receptionist becomes the wife of a big shot, she also becomes a walking symbol of human regret. The character’s wardrobe may improve but watch Stewart’s eyes: beneath a lovely shade of copper eye shadow, she’s palpably dreaming of what might have been.

My next film, Mercury in Retrograde, is the subject of a story by Nina Metz in today’s Chicago Tribune.