The country of Iceland has had a relatively prolific and surprisingly rich local film industry over the past couple decades, especially considering its population is currently hovering at an all-time high of barely more than 300,000 people. I recently visited this delightful Scandinavian nation for the occasion of my fifth wedding anniversary and was able to engage in many film-related activities along the way, including visiting the locations of prominent Icelandic movies and having coffee with legendary director Fridrik Thor Fridriksson. Below are some photos documenting my journey. Unless otherwise noted they were taken by me or my wife, Jill.

Me and the great Fridrik Thor Fridriksson in a quiet corner of Reykjavik’s fashionable 101 Bar. (Our full interview will be posted on this blog soon.)

Fridrik Thor Fridriksson is almost single-handedly responsible for Iceland’s impressive movie boom of the 1990s and early 2000s. His 1991 feature Children of Nature (Börn náttúrunnar), the only locally made film of that year, was the first Icelandic movie to be nominated for a Best Foreign Film Oscar. He sunk the film’s profits into buying production equipment and established the Icelandic Film Corporation, which produced dozens of distinctive films in the following years. I interviewed Fridriksson over coffee and was able to see a beautiful 35mm print of Children of Nature, which I had only previously seen on VHS tape.

Children of Nature ranks for me alongside of Leo McCarey’s Make Way for Tomorrow and Yasujiro Ozu’s Tokyo Story as one of the cinema’s most powerful statements about the predicament of the elderly. It tells the story of Thorgeir (Gísli Halldórsson), an old man who is virtually forced by his uncaring family into living in a retirement home. Upon arriving there he meets Stella (Sigríður Hagalín), an old flame, with whom he soon steals a jeep and escapes to rural southern Iceland so that she can see again the land of her childhood. One of the film’s most evocative scenes occurs right before the couple flee Reykjavik for the countryside: Thorgeir strolls alone through Holavallagardur cemetery, a remarkable site that contains many graves dating back to the 19th century. Flowers and trees have been planted directly on top of many of the plots, giving the impression that the location is a garden as much as it is a graveyard. It is unquestionably the most beautiful cemetery I’ve visited and one that makes its stateside counterparts seem sterile and depressing by contrast. 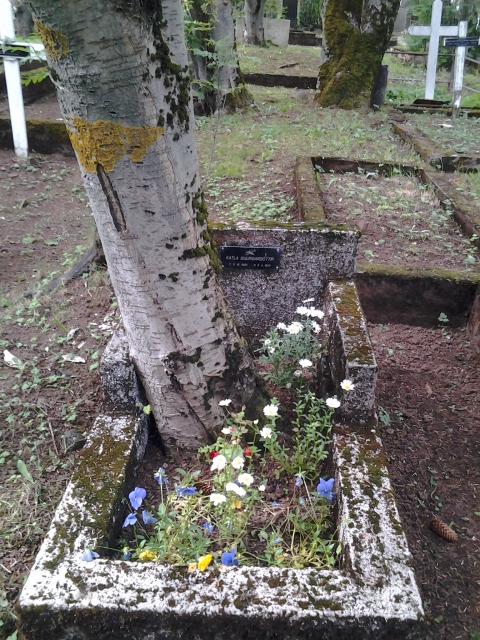 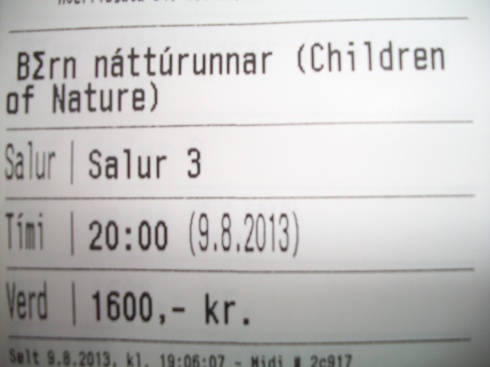 Fridriksson may be best known in the U.S. for Cold Fever (Á köldum klaka), an absurdist comedy/road movie about Hirata (Masatoshi Nagase), a Japanese businessman who travels to Iceland to perform a traditional cleansing ritual at the site where his parents had died years earlier. The film was an international arthouse hit when it was released in 1995/1996 and part of what makes it so charming is the way it uses a fish-out-of-water story to present “typically” quirky Icelandic characters and scenarios to an outsider-protagonist who functions as a surrogate for the viewer. For instance, the first place Hirata visits in Iceland is the Blue Lagoon, an outdoor hot spring that has long been the country’s most popular tourist destination.

Hirata (Masatoshi Nagase) visits the Blue Lagoon in a still from Cold Fever. The milky blue water and roiling mist contribute to an intoxicating, ethereal atmosphere.

Jill and me in the same location 19 years after Fridriksson shot his scene. Please note the above photo was taken at 9:30 pm.

Hirata stays at the upscale Saga Hotel in Reykjavik. In this still from the film he is enjoying a glass of wine in the hotel bar when he’s approached by a punky young woman desperate to sell her car.

The same location as seen today. It has since been purchased by Radisson and renamed the Radisson Blu Saga Hotel.

Unlike Hirata we didn’t pop into the Saga for a drink. We did however imbibe at many other local bars, including the amazing Big Lebwoski-themed Lebowski Bar.

Of course we ordered White Russians . . .

I had the “El Duderino,” which contained tequila and triple sec (appropriate for a drink named after the Dude’s Latinized nickname — or for those “not into the brevity thing”). Jill had the “Tree Hugger,” which was made with soy milk instead of cream!

One of the most popular Icelandic film-exports of the 21st century is Baltasar Kormákur’s offbeat comedy 101 Reykjavik, which details a young man’s affair with his mother’s lesbian lover. One of the movie’s central locations is a trendy bar known as Kaffibarinn. Unfortunately, Kormákur’s subsequent output has become increasingly generic and impersonal (culminating in a recent stint in Hollywood as Mark Wahlberg’s director of choice).

Iceland has become a popular destination for Hollywood productions in recent years (especially sci-fi films in search of exotic exteriors). The opening of Ridley Scott’s Prometheus, one of the most beautiful and enigmatic scenes in that abstract and still-underrated movie, was shot at the awesome Gulfoss waterfall.

Gulfoss: the biggest waterfall in Iceland and one of the most impressive natural wonders I’ve ever seen.

Iceland’s exteriors have also proven to be an attractive option to filmmakers from other European countries. Aleksandr Sokurov’s ambitious Russian/German co-production of Faust (2011), for instance, memorably set its final scene in Geysir (pronounced gay-ZEER), the site of one of only two of the world’s continually spouting geysers. No one in Sokurov’s film, however, looks as remotely happy as my wife and I do here:

This post would not be complete without mention of my visit to Iceland’s Phallological Museum, which contains penis samples of over 280(!) different mammals. The museum’s quest to find a human donor was the subject of the hilarious — and surprisingly sweet — 2012 documentary The Final Member, which I reviewed when it played the Chicago International Film Festival last year. Below is my photograph of the museum’s sole human sample, finally acquired in 2011. It belonged to 95-year-old former explorer Pall Arason.

Please forgive me for posting this.