Episode 11 of my White City Cinema Radio Hour podcast is now online and it is by far my favorite episode to date. I listened to it three times yesterday – and definitely not because of my own contributions! I am enamored of the lively and provocative banter of my guests, film critic Angelica Jade Bastien and film studies professor Nina Cartier Bradley. The three of us use the #OscarsSoWhite controversy as a jumping-off point to talk about race (and racism) in the film industry, film noir and Carl Franklin’s underrated 1995 neo-noir Devil in a Blue Dress. You can listen to the episode at the Transistor Chicago website here. Also, please check out Angelica’s blog Madwomenandmuses.com and please check out this new anthology on race, gender and identity to which Nina contributed:  Future Texts: Subversive Performance and Feminist Bodies.

I also use the episode to plug a screening of Thomas Arslan’s A Fine Day, which I’ll be presenting at Transistor on Saturday, March 26. I wrote the following description about it for the Transistor website:

“A Fine Day” is an intellectual romantic comedy about an eventful day in the life of Deniz (Serpil Turhan), a 21-year-old Turkish immigrant and aspiring actress living in Berlin. After splitting up with her boyfriend, Jan, she immediately embarks on a relationship with Diego, a stranger with whom she becomes infatuated, before engaging in an extended rap session with a philosopher in a cafe. A charming story about one young woman’s search for happiness, “A Fine Day” has never been released in the U.S. but stands as the masterpiece to date by Thomas Arslan, a key writer/director of the “Berlin School” of filmmaking that also produced Christian Petzold. (NR, 2001, 69 minutes)

Michael Smith will introduce the film and a discussion will follow the screening.

I will be offering extra credit to my students for attending the screening. Check the extra credit page of your course website for more info. Hope to see you there! 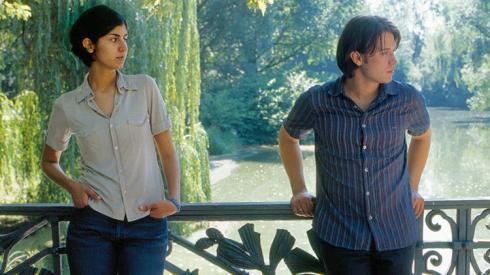