I reviewed Tsai Ming-Liang’s great STRAY DOGS for Cine-File Chicago. It screens at Doc Films twice this weekend as part of their ongoing Tsai retrospective. 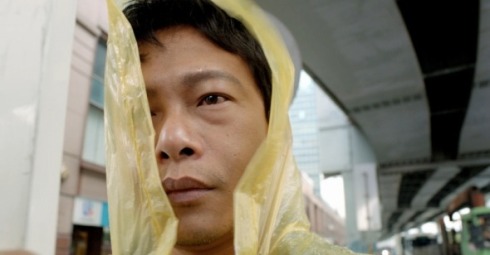 If Tsai Ming-Liang had indeed retired from making feature-length narrative films after STRAY DOGS in 2013, as he indicated in interviews when it premiered, he would have gone out on a high note (he has since returned with 2020’s DAYS). This beautiful film found the great Taiwanese director training his patient camera eye on a homeless man (the inevitable Lee Kang-Sheng) who struggles to provide for his two young children in contemporary Taipei. There are extended wordless sequences of Lee’s unnamed character “working” by standing in traffic and holding an advertising placard — and thus functioning as a human billboard, not unlike the protagonist of Hou Hsiao-Hsien’s THE SANDWICH MAN — as well as washing his children in a grocery store bathroom; these shots are almost startling in their clear-eyed compassion and remind us that, for all of the audacious experimenting he does with form, Tsai has also grounded much of his best work in an authentic sense of character and milieu. The film’s high point occurs about half-way through: a long take of Lee’s character smothering a head of lettuce with a pillow (before doing other interesting things to it, including voraciously biting into it and cradling it in his arms and sobbing over it), a sad, funny and crazy scene that is far more emotionally moving than the similar but more shrewdly contrived and melodramatic climax of Michael Haneke’s AMOUR. Then there is the matter of the amazing penultimate shot: a static close-up of two faces staring at a mural that ticks well past the 10-minute mark before cutting, with one of the characters effortlessly shedding a few tears halfway through, a moment that recalls the famous final shot of Tsai’s breakthrough VIVE L’AMOUR from 1994. Without taking anything away from its culturally specific qualities, I think that the depiction of a family of “have nots” in STRAY DOGS has more to say about the lives of ordinary Americans in the 21st century than the vast majority of movies that have come out of the United States. (2019, 138 min, DCP Digital) MGS