My latest article for Time Out is about the campaign to save Odd Obsession, one of Chicago’s last remaining video rental stores. 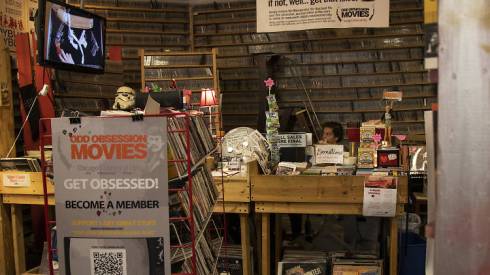 Since owner Brian Chankin founded Odd Obsession in 2004 (originally in Lincoln Park, now located in Bucktown), the beloved video rental store has amassed an impressive library of more than 25,000 titles on DVD, Blu-ray and even VHS. The store’s collection is organized by genre, country and director, and features a wide array of movies for all tastes, including classic Hollywood films, foreign movies and independently-released cult classics. From the beginning, Odd Obsession has distinguished itself by specializing in rare and off-the-beaten-path titles, including many that are not available on streaming services, making it an invaluable resource for local cinephiles. “This is a place where you can really embrace an all-inclusive sense of film history,” says Chicago Reader film critic Ben Sachs.

Chankin is now moving on to pursue other endeavors and is handing over the business to the store’s volunteer staff who hope to keep it afloat. The goal is to keep Odd Obsession’s collection available to Chicagoans with a new model of membership that will make the business sustainable well into the future. Long-time volunteer Josh Brown is leading this transition effort, which includes the Indiegogo fundraising campaign “Keep Odd Obsession Movies Alive!” For contributions of $120 to $400, customers can receive between three months and one year of free rentals (four at a time for a week’s duration with an “extreme late fee forgiveness” policy); but there are plenty of other more affordable perks too—including stickers for just $5 or a coffee mug emblazoned with the visage of Charles Bronson for $25. “This collaborative spirit driven forward can take shape in the form of community events and new extensions to the store’s mission,“ says Brown.

If you refuse to limit your movie-watching options to the titles provided by streaming services, you should take a look at Odd Obsession’s Indiegogo campaign and consider kicking in a few bucks to keep the local institution alive. With just five days left, the shop is only about a quarter of the way to its $25,000 goal—every dollar gets the volunteer staff one step closer to preserving an impressive collection of obscure flicks.

Filmmaker, author and Film Studies instructor. END_OF_DOCUMENT_TOKEN_TO_BE_REPLACED
This entry was posted on Wednesday, October 23rd, 2019 at 8:35 am and tagged with Odd Obsession and posted in Uncategorized. You can follow any responses to this entry through the RSS 2.0 feed.
« The Last Ten Movies I Saw
RENDEZVOUS IN CHICAGO Interview »