The following review of Casey Puccini’s I Don’t Care appeared at Time Out Chicago today. 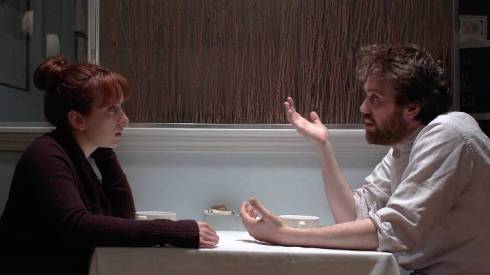 I Don’t Care, the sophomore feature of Chicago filmmaker Casey Puccini (Children Without Parents), will receive its local premiere at Chicago Filmmakers this Saturday, August 25. It’s a sharply made, acerbic comedy chronicling a pretentious filmmaker (played by Puccini himself in a performance that impresses for its stubborn refusal to elicit viewer sympathy) whose most recent micro-budget opus spirals out of control due to a combination of his own incompetence and unexamined hubris. Puccini has described the movie as not strictly autobiographical although, given that he’s also calling it a “cautionary tale,” it seems likely that both the central character and basic scenario arose from imagining his life having gone down a darker path.

If the selfish fictional character of “Casey Puccini” were the whole show, I Don’t Care might risk being a too-bitter pill to swallow. Fortunately, Puccini had the good sense to cast the soulful, Jeff-award winning actress Sasha Gioppo opposite him (as an actress named, you guessed it, Sasha), and much of this modest film’s comedic power results from waiting for her character—initially good-natured but unpaid and underfed—to crack under the guidance of her ungrateful and indecisive “auteur.” The tension between the two reaches a boiling point in this modest movie’s best scene, where a paranoid Gioppo accuses Puccini of stealing her necklace during the course of a particularly stressful shooting day. It’s a mini-masterpiece of cringe humor that should resonate with anyone familiar with the sometimes-harrowing process of artistic collaboration.

Filmmaker, author and Film Studies instructor. END_OF_DOCUMENT_TOKEN_TO_BE_REPLACED
This entry was posted on Wednesday, August 22nd, 2018 at 2:30 pm and tagged with Casey Puccini, I Don't Care and posted in Chicago Movies, Film Reviews. You can follow any responses to this entry through the RSS 2.0 feed.
« Talking RENDEZVOUS IN CHICAGO on Playtime with Bill and Kerri
The Last Ten Movies I Saw »

One response to “Casey Puccini’s I DON’T CARE”