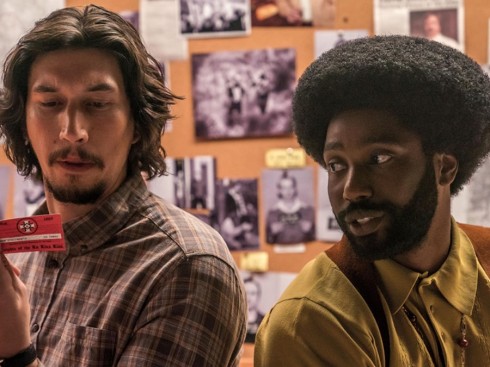 Spike Lee’s galvanizing new comedy/drama BlacKkKlansman will be released in theaters this Friday, August 10, one year to the day after the notorious “Unite the Right” rally in Charlottesville, Viriginia became the site of violent clashes including a car attack that left one counter-protester dead. The release date is no coincidence: although the film is set in 1970s Colorado Springs, Colorado, one of its implicit aims is to use the incredible true story of a black undercover police officer’s successful infiltration of the Ku Klux Klan in order to examine America’s current cultural climate. The title cop, Ron Stallworth (played by newcomer John David Washington, Denzel’s son, in a charismatic, understated performance), communicated with the Klan via telephone then, taking a page from the Cyrano de Bergerac playbook, sent a white officer (Adam Driver, also wonderful) in his stead for face-to-face meetings. Bridging this era with the present is David Duke (Topher Grace), the KKK’s Grand Wizard who updated and sanitized the image of white nationalism, arguably paving the way for the racist hate-mongering that has characterized Donald Trump’s presidency. In telling this remarkable tale, Spike Lee has made his most vital narrative feature in decades and is deservedly receiving his widest theatrical distribution since Inside Man in 2006.

In spite of the seriousness of the subject matter, however, BlacKkKlansman is frequently hilarious as satire (especially the scenes involving Stallworth’s phone conversations with Duke). While Lee’s previous work has frequently been both sloppy and didactic, he’s able to pull off crazy tonal shifts here that are both complex and masterful – most notably in a startling coda using contemporary documentary footage that will undoubtedly be much talked about. BlacKkKlansman is also surprisingly taut as a genre piece; it’s a buddy cop film that nods to classic blaxploitation films from the era in which it’s set. The way it uses genre tropes to comment on social issues has caused some critics to compare it to Jordan Peele’s Get Out and Boots Riley’s Sorry to Bother You (which accomplished similar things with the horror and sci-fi genres, respectively). But the provocative way Lee superimposes the present onto the past ultimately put me in the mind of John Ford’s Young Mr. Lincoln more than any other movie: just as Ford’s myth-making about a canny young lawyer from Springfield, Illinois achieves a sublime poignancy because of the viewer’s knowledge of who Abe Lincoln will become in the future, so too does Lee achieve an ironic and tragic grandeur because of the viewer’s knowledge of what will happen to the whole damn United States of America after Stallworth’s assignment has ended. To paraphrase something Woodrow Wilson reportedly said about D.W. Griffith’s The Birth of a Nation (itself a major reference point in BlacKkKlansman), Lee’s essential new film is history written with lightning.

Filmmaker, author and Film Studies instructor. END_OF_DOCUMENT_TOKEN_TO_BE_REPLACED
This entry was posted on Friday, August 10th, 2018 at 8:25 am and tagged with BlacKkKlansman, Spike Lee and posted in Film Reviews. You can follow any responses to this entry through the RSS 2.0 feed.
« The Last Ten Movies I Saw
Talking RENDEZVOUS IN CHICAGO on Playtime with Bill and Kerri »