I’m pleased to announce that, after eight long and intense days of shooting, my latest feature Rendezvous in Chicago has wrapped production! I could have never crossed the finish line so quickly and efficiently without the heroic efforts of my phenomenal cast and crew. Below is a photo of me with our special guest star Haydee Politoff from the first day of shooting as well as a “Director’s Statement” I’ve drafted for film-festival submission purposes. I strongly suspect the film will have a Fall World Premiere. Stay tuned for more info! 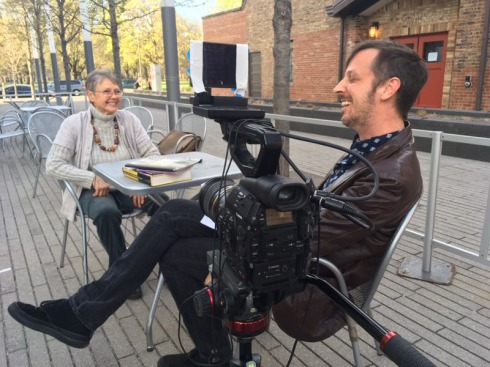 “As a filmmaker I have long been fascinated by the cinematic representation of relationships and communication. RENDEZVOUS IN CHICAGO constitutes the third part in a trilogy of films tackling these subjects (following my previous features COOL APOCALYPSE and MERCURY IN RETROGRADE) although, rather than telling a single narrative, this film is itself a trilogy; it is comprised of three vignettes that correspond to the beginning (THE BROTHERS KARAMAZOV), middle (CATS AND DOGS) and end (THE END IS THE BEGINNING) stages of a relationship. This tripartite structure allowed me to come up with a distinct visual style for each vignette in terms of color palette and camera movement. The cast is the finest I’ve ever had the pleasure to work with, featuring many well-known Chicago actors (Rashaad Hall, Clare Cooney, Nina Ganet, Matt Sherbach, Shane Simmons, etc.) as well as French import Haydee Politoff (whose cameo is an homage to her mentor Eric Rohmer); but what really sets RENDEZVOUS apart from my previous work is its more overtly comedic tone and the way that it abandons naturalism in favor of a dreamlike but gentle surrealism. I hope you walk away from it with a smile on your face and a song in your heart.” – Michael Glover Smith, 5/26/18