More on THE ART OF SITTING QUIETLY AND DOING NOTHING

I reviewed Nick Alonzo’s The Art of Sitting Quietly and Doing Nothing for Cine-File Chicago (this is a different review than the one I recently wrote for Time Out Chicago). It has its World Premiere at the Nightingale Cinema tonight at 7:30pm. I will be moderating the post-screening Q&A with members of the cast and crew. Hope to see some of you there! 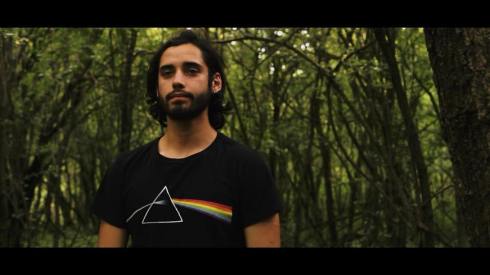 “Sitting quietly, doing nothing, Spring comes, and the grass grows, by itself.” So goes a 17th-century haiku by Basho that inspired the title of Nick Alonzo’s new comedy. This koan-like poem, which reminds readers of the importance of letting things happen (as opposed to making them happen), is fitting for our modern world where the notion of busy urban professionals consciously “unplugging” in order to undergo a “digital detox” has become a common occurrence. This also happens to be the story of Carl (Alex Serrato), the film’s poker-faced anti-hero who embarks on a solitary, Henry David Thoreau-style retreat into nature after a breakup with his longtime girlfriend Gloria (Alycya Magana). In contrast to Alonzo’s debut feature, SHITCAGO, which featured a deadpan protagonist encountering a strange menagerie of characters in the city, most of THE ART OF SITTING QUIETLY AND DOING NOTHING is devoted to scenes of Carl alone in the woods in the suburbs—masturbating, exercising, writing in his diary, attempting to fish, etc.—scenarios out of which Alonzo gets a surprising amount of comic mileage. The incongruity of this city dweller alone in verdant nature is highlighted by the fact that he perpetually sports a t-shirt emblazoned with Pink Floyd’s Dark Side of the Moon album cover—the ultimate symbol of mass reproduction and popular culture—but Alonzo also posits Carl’s strange odyssey as a genuine, and genuinely poignant, desire for spiritual rebirth. At its best, the minimalist, black-and-white-shot SHITCAGO brought to mind early Jim Jarmusch and Chantal Akerman. THE ART OF SITTING QUIETLY AND DOING NOTHING, a clear advance on its predecessor, might best be described as “stoner Apichatpong.” Alonzo and select cast and crew in person. (2018, 80 min, Digital Projection) MGS

Filmmaker, author and Film Studies instructor. END_OF_DOCUMENT_TOKEN_TO_BE_REPLACED
This entry was posted on Friday, May 4th, 2018 at 5:26 pm and tagged with Nick Alonzo, The Art of Sitting Quietly and Doing Nothing and posted in Chicago Movies, Film Reviews. You can follow any responses to this entry through the RSS 2.0 feed.
« Clare Cooney’s RUNNER at the Chicago Critics Film Festival
The Last Ten Movies I Saw »