I wrote the following piece about Hossein Khandan’s Waiting for Kiarostami and Abbas Kiarostami’s 24 Frames for Time Out Chicago. Both screen at the Gene Siskel Film Center’s invaluable annual festival of films from Iran. 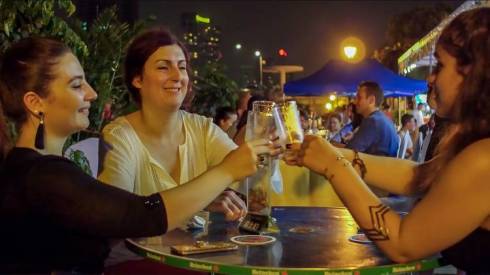 Although he passed away abruptly in 2016 at the age of 76, director Abbas Kiarostami’s presence continues to loom large over contemporary Iranian cinema. The Siskel Center’s 28th Annual Festival of Films from Iran, which kicked off on Friday, February 3 and runs through the end of the month, features Waiting for Kiarostami, a narrative feature by the Chicago-based Iranian filmmaker Hossein Khandan, and 24 Frames, an experimental feature begun by Kiarostami but completed posthumously by his son Ahmad.

Khandan’s film stars Khandan as himself and is based on the true story of how Kiarostami tasked him with finding a suitable actress fluent in both Mandarin and Farsi for a movie to be shot in China that would have been a follow up to Kiarostami’s Japanese-set Like Someone in Love (2012). Waiting for Kiarostami, which resembles Kiarostami’s own hall-of-mirrors masterpiece Close-Up (1991), features extended scenes of Khandan grooming Dorsa Sinaki (a talented newcomer also playing herself) for an audition with Kiarostami that will sadly never materialize. Conflict arises when Sinaki’s conservative father, Koroush, objects to his daughter’s artistic ambitions, which he feels will derail her promising medical career. Made on a shoestring budget, it’s a smart, provocative and ultimately touching tribute to Kiarostami bolstered by a terrifically intense performance by Homayoun Ershadi (the lead in Taste of Cherry) as Koroush.

24 Frames contains the most innovative use of CGI I have ever seen. It begins with an astonishing sequence in which Kiarostami “animates” Bruegel’s famous 16th century painting Hunters in the Snow: snowflakes fall in the foreground, smoke rises from chimneys in the distance, birds fly across the top of the frame and a dog urinates on a tree. This scene, lasting four-and-a-half minutes, essentially teaches viewers how to watch the rest of the film; it is followed by 23 more scenes of exactly the same length in which Kiarostami similarly uses CGI to bring his own still photographs to life. The “frames” I am most fond of include one, Tati-esque in its humor, in which a dog barks incessantly at a flag waving in the wind on a snow-covered beach, and another, the profound final shot of the movie, in which a woman sleeps in front of a laptop computer while the final shot of The Best Years of Our Lives plays on the monitor in slow motion. Adventurous cinephiles should have a field day with 24 Frames, which is not only ravishingly beautiful to look at but also invites viewers to contemplate the relationship between cinema and photography. It’s a fitting final chapter in the career of a man who happened to be a giant of both mediums.

For more information about the 28th Annual Festival of Films from Iran, visit the Siskel Center’s website.