In honor of the Twin Peaks: Limited Event Series Blu-ray set being released today, here’s something new I wrote about the show’s innovative use of closing credits to impart narrative information. 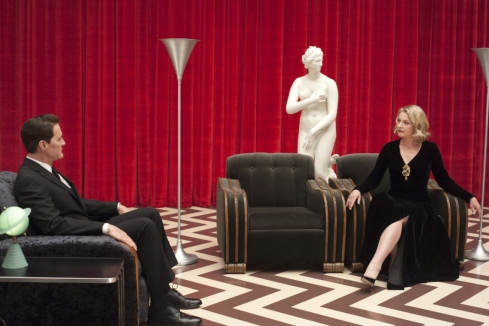 Along with everything that’s more obviously groundbreaking about it, one of the most subtly innovative aspects of the new season of Twin Peaks is the unique way the show’s makers used the end title credits to convey or conceal important narrative information and thus build a unique form of suspense in the process. Let’s start with the unusual fact that only key crew members are listed in the opening credits while all of the cast members, including star Kyle MacLachlan, are listed only in the closing credits. For those watching “live” on Showtime over the summer, this had the effect of not tipping off viewers in advance as to which actors in the extensive 200+ cast-member list would appear in each episode while also inviting viewers to scrutinize the end credits more closely in order to figure out exactly who was who and what was going on. This is where the real narrative gamesmanship begins: the way actors are (and are not) credited, and the way their credited character names sometimes change from one episode to the next, serves at least five different purposes in the show.

1. A character’s name is represented by question marks until his name is revealed on the show.

Carel Struyken’s character in Season Two was credited as “The Giant.” Many fans were surprised when the credits first rolled on Part One of Season Three to see that he was now credited as “???????” Even though Struyken was still playing a benevolent extra-dimensional being with a fondness for bow ties, was he the same character from 25 years ago or a new one? In Part 14, he introduces himself to Deputy Andy Brennan as the “Fireman,” which is how his character is then named in the closing credits of that episode. It seems likely that Lynch and Frost didn’t want viewers to know too soon that this guy puts out fires, whether literally or metaphorically, which would’ve perhaps allowed them to connect certain dots concerning the Black and White Lodge mythologies.

2. Some actors are not credited at all.

In some cases, this appears to have been done to preserve a sense of mystery about the character being portrayed. A case in point is the charcoal-black vagrant-looking character who first appeared in a prison cell next to Matthew Lillard’s Bill Hastings way back in Part 2. Some enterprising internet sleuths soon discovered that this spectral entity was played by character actor Stewart Strauss. Later on, when more of these characters appeared, the most prominent among them was credited as “Woodsman” (a memorable turn by professional Abraham Lincoln impersonator Robert Broski). It seems likely that crediting Stewart Strauss as a “Woodsman” in Part 2 would have revealed too much too soon in the eyes of the show’s creators – especially since Jurgen Prochnow and David Brisbin were also credited as “Woodsmen” in Twin Peaks: Fire Walk with Me where they were explicitly depicted as Black Lodge denizens.

Madchen Amick’s Shelly Johnson from Seasons One and Two is credited only as “Shelly” up until Part 11 where it is revealed both in the dialogue of the episode and in the closing credits that her name is now “Shelly Briggs.” In this same episode it can be inferred that Shelly is now divorced from her second husband Bobby Briggs. Had Shelly been credited as “Shelly Briggs” in Part One of Season Three, many viewers would have believed that Shelly and Bobby were still married. It is likely that her new last name was initially withheld in order to avoid misdirecting viewers in to getting their hopes up.

4. Credited character names clue viewers in to the fact that familiar actors are and are not playing familiar characters.

Longtime fans would have assumed that Lynch favorite Phoebe Augustine was reprising her role as Ronette Pulaski in the experimental opening of Part Three had the closing titles not informed us instead that her character was instead named “American Girl.” Conversely, many longtime fans would have assumed that Mark Frost’s delightful cameo as a trailer-park denizen walking his dog was meant to be a different character than the T.V. news reporter he originally played in Season One until the closing credits of Part 16 informed us that he was, in fact, reprising the role of “Cyril Pons.”

5. A character’s last name is revealed early in order to avoid surprising viewers.

New Twin Peaks characters are only given a last name in the credits of Season Three in the event that their last names are also spoken on the show. One exception to this is Eamon Farren’s Richard Horne, the offspring of Audrey Horne and the evil “Mr. C.” When this character first appeared, assaulting a young woman in a bar in Part Five, his full name appeared in the credits. This caused much speculation among fans about how exactly he was related to the other Horne characters with many correctly inferring that Mr. C must have raped Audrey while she was in a coma. Had Richard’s last name not appeared in Parts 5 and 6, it would have come as a major surprise to everyone when he turned up at Sylvia Horne’s home in Part 10 and referred to her as “Grandma.” This surprise seems to be something the show’s creators wanted to avoid.