Hou Hsiao-hsien’s Daughter of the Nile

I have a capsule review of Daughter of the Nile, Hou Hsiao-hsien’s great portrait of urban Taiwanese malaise circa 1987, in this week’s Cine-File. It screens at the Gene Siskel Film Center four times over the next week in a beautiful new 4K digital restoration. You can read the full review below. 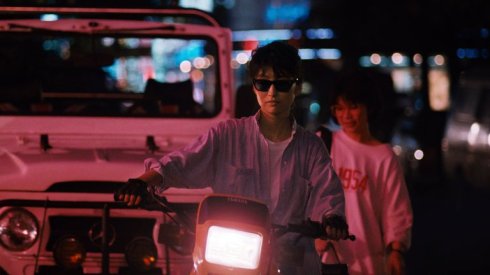 Hou Hsiao-hsien’s DAUGHTER OF THE NILE (Taiwanese Revival)
Gene Siskel Film Center – Check Venue website for showtimes
Until recently, DAUGHTER OF THE NILE has been the most difficult to see film of Hou Hsiao-hsien’s post-BOYS FROM FENGKUEI (1983) mature period; it has never been released on home video in the U.S. and was absent entirely from the Siskel Center’s Hou retrospectives in 2000 and 2015. It has also been the director’s most critically neglected work to date; when discussed at all, most critics, including Jonathan Rosenbaum, have tended to compare this contemporary urban drama unfavorably with the rural period pieces that immediately precede and follow it in Hou’s filmography (i.e., 1986’s DUST IN THE WIND and 1989’s A CITY OF SADNESS). When seen from the vantage point of today, however, thanks to a superb new 4K digital restoration by the Taiwan Film Institute, it seems obvious that this is where the modernist Hou of the 1990s was truly born. Based on a proposal from a record company, and conceivedof as a star vehicle for the young female pop singer Lin Yang, Hou, working with three screenwriters, turned the project into a highly personal and stunningly oblique examination of disaffected Taipei youth that prefigures his better known returns to the same milieu in later masterworks like GOODBYE, SOUTH, GOODBYE (1996), MILLENNIUM MAMBO (2001) and thecontemporary segments of GOOD MEN, GOOD WOMEN (1995) and THREE TIMES (2005). Lin, in her screen debut, gives a soulful, quietly riveting performance as Hsiao-yang, a teenage girl who works at a Kentucky Fried Chicken by day and goes to school at night, all the while trying to prevent her fractured family from breaking apart for good. Lin finds fleeting moments ofhappiness by imagining herself as the protagonist of her favorite manga, the source of the movie’s title, and when flirting with Ah-sang (Fan Yang), the best friend of her older brother, Hsiao-fang (future Hou regular Jack Kao), both of whom are on the verge of falling dangerously into a life of crime. Hou’s extensive use of nighttime exteriors, illuminated by neon lights and, in one unforgettable sequence, fireworks, combine with Lin’s past-tense voice-over narration to make the whole thing float by like a sad and haunting yet beautiful dream. If you have never seen a film by Hou Hsiao-hsien and are curious as to why a lot of critics, including me, consider him the best narrative filmmaker working today, this is an excellent place to start exploring his work. (1987, 93 minutes, DCP Digital) MGS