The following article appeared in today’s Time Out Chicago: 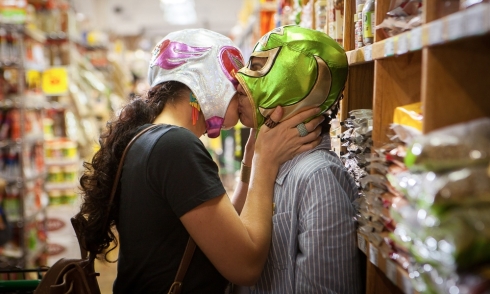 On Thursday, September 28, the Chicago South Asian Film Festival will host the local premiere of Jennifer Reeder’s acclaimed debut feature Signature Move, a crowd-pleasing rom-com about a Pakistani Muslim lesbian lawyer who attempts to hide her love life and interest in lucha-style wrestling from her conservative, live-in mother. This special preview screening takes place at the Music Box Theatre one day before the film’s theatrical run begins and will feature a private meet-and-greet with legendary Indian actress Shabana Azmi as well as a Q&A with Azmi, Reeder and the film’s producer, writer and star, Fawzia Mirza. I recently spoke to Reeder about the film.

MGS: You’re known for writing and directing your own short films. What was it like directing a feature written by somebody else?

JR: On the one hand, it was a challenge that at first I was not sure I was up for. I feel very particular about every aspect of my shorts from pre-production through writing. I’m involved in art direction and casting and certainly I usher the entire thing, frame by frame, through post-production—[my films] feel very hand-crafted. They feel like they’re coming from a place of “auter-ship,” if I can say that about myself. So taking on material that was also very particular to Fawzia, it was a story that’s very different from my own story. When you take on a story about a Pakistani Muslim lesbian, that’s very specific. The character of the director is weighed when you say yes or no to certain projects. Saying yes to this project was obviously a really smart idea. I feel like I learned so much and in the process I also figured out a way to tell someone else’s story authentically. Being in an audience of young people of color or being in an audience that’s LGBTQ and having that audience say that it was validating and authentic means that I’ve done the right thing, and it means I can kind of exhale and say, “Okay, I can do this again.”

MGS: When I think of your shorts I think of them as narratives that are experimental in terms of their aesthetics. With Signature Move were you consciously trying to make something that was more accessible?

JR: Absolutely. That was also part of the challenge: to make something that felt like the general narrative through-line was more accessible, the way that it’s shot is more accessible, even the jokes are more conventionally funny than my other films that have more of a dark or cynical sense of humor. There are also some moments that feel very much like me. There are “drifty” moments where we’re sitting with the character in, for instance, the bridal shop where she’s looking through fabrics and whatnot—it’s kind of character development, it’s being able to look at the texture of that culture, but it doesn’t propel the narrative in a conventional way. Those felt like important moments to inject into this film because they feel very much like they’re coming from my DNA as a filmmaker. But, at the same time, especially for a feature-length, it’s important that you have an audience come with you and that it’s entertaining. It premiered at SXSW. That’s not a niche audience. Those were packed audiences who laughed in all the right places, and again that’s pretty validating.

MGS: This is one of the most female-centric films I’ve ever seen and I mean that as a compliment. There has been a lot of talk about the lack of female representation in cinema and men are nowhere to be seen in this movie. Were you trying to redress the gender imbalance?

JR: Yeah, absolutely. My shorts have oftentimes featured only females. So it’s something that I’ve been aware for quite a while in terms of casting or who I want to write a story about or who I want to put in front of my camera because that’s their story but also as a form of social justice. We also made a commitment to have lots of women behind the camera. It wasn’t just me as a director. The first A.D. was a woman, there were two female producers, the art department was all women, the makeup department was all women, the camera department was women. That’s also part of the commitment — it matters in terms of the crew. Shabana Azmi, who plays Parveen and is amazing, she noted it. She said, “This set feels different with all of these women in front of and behind the camera.” She didn’t have to say that. But as we’ve been showing it around, I don’t feel like the men in the audience feel excluded from the story. If anything, when the final credits roll, they might do what you did: “Wow, that was all women, except for the bartender.”

MGS: Speaking of Shabana Azmi, much of her dialogue is in Urdu. To have so much subtitled dialogue in both Spanish and Urdu is unusual for an American film. Was it difficult for you to direct actors in a language other than your native tongue?

JR: Yeah, definitely. As a writer and also as a director, I’m particular about how people say words. I know enough Spanish to understand the things they were saying were correct but the Urdu was completely different. I speak some Urdu now based on the script and going through the production with all those lines. Obviously, Shabana speaks Urdu, Fawzia speaks Urdu, one of the producers speaks Urdu and we had a P.A. on set doing translations. So every time we did a take it would go through four levels of making sure that the translation was correct. Trusting the tone and cadence of those lines was correct was a learning curve. It was a really cool challenge. Then we ADR’d all of the soap opera in the background. That was a whole script in and of itself that was written (for the film) and it was the same thing: we were over in a sound studio with actors speaking Urdu. I was like, “That sounded good but was that correct?” We would listen to it again and have two people go through it to make sure that they were using, for instance, the right formal pronouns.

MGS: So the dialogue that was scripted for the soap opera was intended to comment on the main narrative?

JR: Absolutely. It really operates like a subplot. At one point we were going to do an actual soap opera and shoot that actual footage. In the script it seemed great but then you’re adding another 10 days onto production. But yeah, we wanted it to be this story about these star-crossed lovers whose parents didn’t agree with their relationship, a kind of Urdu Romeo and Juliet that the mom could use as a parallel — that somehow by watching this Pakistani melodrama she was also learning something about the rules of love and how she had to let her daughter love who her daughter wanted to love.

To learn more about the premiere of Signature Move, visit the Music Box’s website.

Filmmaker, author and Film Studies instructor. END_OF_DOCUMENT_TOKEN_TO_BE_REPLACED
This entry was posted on Tuesday, September 26th, 2017 at 10:31 pm and tagged with Jennifer Reeder, Signature Move and posted in Interviews. You can follow any responses to this entry through the RSS 2.0 feed.
« The Last Ten Movies I Saw
The Last Ten Movies I Saw »