Western Mythology and Motifs in TWIN PEAKS: THE RETURN

In his perceptive review of the controversial Twin Peaks Season 3 finale, the New Yorker‘s Richard Brody makes a startling yet logical comparison between Part 18 of David Lynch’s magnum opus and one of the greatest of all American films: “Over the course of the series’s final sprint, Lynch turns this story into an elemental drama of dramas, a distorted and refracted version of the lone American male hero on a relentless quest to rescue an abused woman — he turns ‘Twin Peaks: The Return,’ in other words, into a modern-day version of John Ford’s ‘The Searchers,’ and the tragic depth of his view of the solitary and haunted Western hero is worthy to stand alongside Ford’s own.”

I don’t necessarily believe that John Ford’s masterpiece was a conscious influence on Part 18 — although it is worth noting that an explicit nod to The Searchers did occur in the first episode of Twin Peaks Season 2 back in 1990: the senile room-service waiter at the Great Northern Hotel who serves a glass of warm milk to Agent Cooper, not realizing that he’s been shot, was played by none other than Hank Worden, a character actor from Hollywood’s golden age best known for playing “Old Mose” in The Searchers. In fact, Lynch and Mark Frost (who is credited with the “teleplay” of this episode) even have Worden repeat Mose’s signature phrase “Thank you kindly!” upon receiving Agent Cooper’s gratuity.

But Brody’s instructive comparison got me thinking about the proliferation of references to both western movie mythology and the “settling” of the actual American West that occurs throughout Twin Peaks: The Return — and how Lynch and Frost use such references to paint a surprisingly political portrait of a contemporary America whose essentially savage and gun-crazy nature seems rooted in the original sin of the genocide of Native American people. What follows is a series of notes on some of the prominent western references throughout Twin Peaks Season 3.

– One of the most pleasant initial surprises of the new season for many viewers was realizing how much the role of Deputy Hawk, the Native American character played by Michael Horse, had been expanded. Hawk’s late night phone calls with the ailing Log Lady (Catherine Coulson), spread across five episodes, form the emotional and spiritual core of the new Twin Peaks. The Log Lady informs Hawk that “something is missing” relating to the Laura Palmer investigation and that finding it will have something to do with his “heritage.” When Hawk actually does find the missing pages from Laura’s diary there’s a poignant irony in that the process doesn’t relate to the beliefs or customs of his Nez Perce tribe in any meaningful way. Rather, the missing pages have been hidden in a bathroom stall door that just happens to be embossed by a manufacturing company logo featuring an Indian wearing a feathered bonnet. The fact that a dropped Indian Head nickel leads Hawk to this discovery further reinforces the idea that Lynch and Frost intended this aspect of the plot to be a commentary on the commodification of Native American culture. Michael Horse ultimately starred in 14 episodes of the new season, more than any actor aside from Kyle MacLachlan, and appears to have been given an unusual degree of agency by the show’s makers: Horse confirmed that he himself painted the delightful “living map” that Hawk shows Sheriff Truman (Robert Forster) midway through the season. 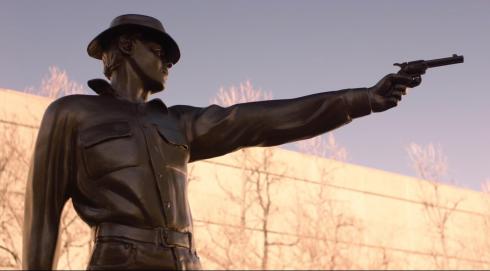 – To the surprise of many, most of the new season takes place not in the title town but in Las Vegas — a desert city in the heart of the American Southwest where never-ending strips of air-conditioned casinos serve as monuments to the twin triumphs of westward expansion and capitalism. Outside of the Vegas branch of the “Lucky 7” Insurance Company where Dougie Jones/Dale Cooper works is a statue of a cowboy. Oddly, the statue, which Dougie/Coop becomes fixated on, is pointing a gun directly at the entrance of the building.

– Wally Brando (Michael Cera), who is, let’s face it, a modern-day cowboy — on a steel horse he rides! — tells Sheriff Truman that he’s been traversing the highways and byways of America and following in the footsteps of “Lewis and his friend Clark” (who, Wally helpfully points out, were the “first caucasians” to see the Pacific Northwest). The funniest scene in all of Twin Peaks?

– The office of the “Detectives Fusco” (Larry Clarke, Eric Edelstein and David Koechner) in the Las Vegas police department is adorned with a painting of a cowboy on horseback.

– The genocide of Native Americans is explicitly invoked in Part 14 when Chantal (Jennifer Jason Leigh) and Hutch (Tim Roth) eat fast food in their van while discussing the morality of their jobs as assassins. Hutch speculates that there’s nothing wrong with them being paid to kill people precisely because the U.S government “killed damn near all the Indians.”

– Lissie, one of David Lynch’s favorite contemporary singer-songwriters, performs a song titled “Wild, Wild West” at the conclusion of Episode 14. Many critics have pointed out that the pop songs performed in the Roadhouse (often at the conclusion of the episodes) seem to have been chosen because their lyrics resonate with prominent themes in the show, which is certainly the case with Lissie’s song.

– Part 18 features more western motifs in the imagery and even the dialogue (e.g., Sheryl Lee’s Carrie Page talking about “getting out of Dodge,” etc.) than all of the other episodes put together. It takes place in a small town in Texas — even if it’s an alternate-reality version of Texas — just like The Searchers, which makes Brody’s comparison even more striking. One very memorable scene in this episode takes place in a diner where Cooper asks three armed and cowboy-hatted men to unhand the waitress they are harassing. The scene ends on a note of absurd humor as Cooper disarms these “concealed carry” aficionados like a true western hero before dropping all of their guns into the diner’s deep frier. Is it a coincidence that the waitress being harassed is played by Francesca Eastwood, daughter of western movie icon Clint Eastwood?

2 responses to “Western Mythology and Motifs in TWIN PEAKS: THE RETURN”