INHERENT VICE in the Age of Trump 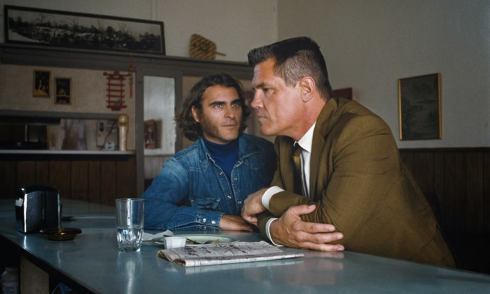 Paul Thomas Anderson’s Inherent Vice, which was greeted with incomprehension by many critics and viewers upon its first release in 2014, is one of the best and most underrated American films of recent years. I’m convinced that, like a lot of the Great American Movies, it was at least several years ahead of its time. If it had been released during the Trump administration, for instance, its resonance within our culture would have undoubtedly been much greater. This is because we are now living in an era that is more politically divisive than at any time since 1970 when the film (and Thomas Pynchon’s source novel) take place. The summer of 1970 was a schizoid time in America: it was halfway through Nixon’s first term, the height of the Vietnam War, and the first summer after the Manson Family murders revealed the dark, flip side of hippie culture. It was also the year that an arty, X-rated movie like Midnight Cowboy could win the Best Picture Oscar on the same night that John Wayne took home the Best Actor trophy for True Grit. This cultural schism is reflected in Pynchon’s novel but I think Anderson takes the concept even further in his deft adaptation by making it explicit that Larry “Doc” Sportello (Joaquin Phoenix’s hip, stoner private eye), and Christian “Bigfoot” Bjornsen (Josh Brolin’s ultra-square Dragnet-style cop) are each other’s doppelgangers; they literally speak in unison at the end of the film in an unforgettable scene where Bigfoot first smokes then eats all of Doc’s weed. The fact that this mismatched duo are forced to become uneasy allies in order to fight a common enemy is something that makes them similar to other private eye/cop pairs in classic film noirs before them but Anderson also seems to be saying that, taken together, these two are America, with each of them falling on a different side of an unbridgeable cultural divide. Which is perhaps why, even though Inherent Vice is hilarious throughout, the ending has always struck me as genuinely tragic.

Filmmaker, author and Film Studies instructor. END_OF_DOCUMENT_TOKEN_TO_BE_REPLACED
This entry was posted on Friday, June 9th, 2017 at 8:51 pm and tagged with Inherent Vice, Paul Thomas Anderson, Thomas Pynchon and posted in Uncategorized. You can follow any responses to this entry through the RSS 2.0 feed.
« The Last Ten Movies I Saw
The Last Ten Movies I Saw »

One response to “INHERENT VICE in the Age of Trump”