CONTRACTED at Transistor / KATE PLAYS CHRISTINE at the Siskel

I will be introducing two screenings and moderating filmmaker Q&As this week: on Thursday, December 8, I will host a screening of Eric England’s modern horror cult-classic Contracted at Transistor Chicago. This free screening, sponsored by the Chicago Independent Film Critics Circle, will be followed by a Skype Q&A with England and actress Najarra Townsend. On Friday, December 9, Robert Greene’s Kate Plays Christine, my favorite non-fiction film of the year, will receive its Chicago premiere at the Gene Siskel Film Center. I will moderate the post-screening Q&A with Greene on Friday and Steve James (Hoop Dreams) will moderate the Q&A following the second show on Saturday.

I wrote the following event description of the Contracted screening for the Transistor website:

Samantha (Najarra Townsend), a young woman feeling low after being dumped by her lesbian lover, gets drunk at a party and engages in a one-night stand with a strange man named B.J. (a sinister, out-of-focus Simon Barrett). The next day she fears she has contracted an STI but, as her symptoms worsen, realizes that her body is actually rotting from the inside out. Writer/director Eric England, aided immeasurably by a brave lead performance by Townsend and terrific, old-fashioned make-up effects, mines not only genuine terror from this Cronenbergian body-horror scenario but also a surprisingly rich vein of black comedy. The result is an awesome low-budget shocker that creates and sustains a spirit of nasty fun that filmmakers with much higher budgets would no doubt love to buy. 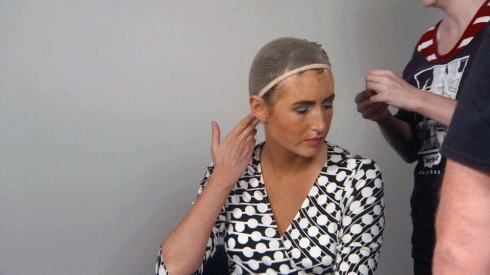 Documentarian Greene (ACTRESS, FAKE IT SO REAL) has turned increasingly toward explorations of the slippery boundary between fact and fiction. His subject here is Christine Chubbuck (also the subject of the recent fiction film CHRISTINE), a Florida newscaster who committed suicide on-air in 1974. Greene’s method is to follow esteemed indie actress Kate Lyn Sheil (SUN DON’T SHINE, SILVER BULLETS) as she investigates Chubbuck’s life and reenacts scenes from the newscaster’s last days. Actress and role begin to blur in uncanny ways, with a sense of mounting dread and anticipation as she approaches the final showdown: a graphic reenactment of the suicide itself. Will she be able to go through with it? Do we want her to? Should she? Should we? Echoes of NETWORK, FUNNY GAMES, and PERSONA resonate through this haunting, moving, and thought-provoking film. DCP digital. (MR)

Filmmaker, author and Film Studies instructor. END_OF_DOCUMENT_TOKEN_TO_BE_REPLACED
This entry was posted on Monday, December 5th, 2016 at 10:14 am and tagged with Kate Plays Christine, Robert Greene and posted in Uncategorized. You can follow any responses to this entry through the RSS 2.0 feed.
« The Last Ten Movies I Saw
The Last Ten Movies I Saw »