My new blog post at Time Out Chicago concerns Kino/Lorber’s essential new Pioneers of African-American Cinema box set. My original version, longer and more intelligible than Time Out’s edit, is reproduced in its entirety below: 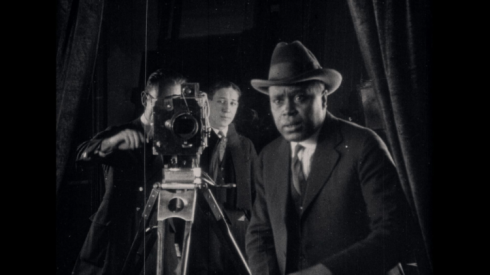 Newsreel image of Oscar Micheaux directing a film, probably The Brute, in Chicago circa 1920.

Kino Lorber’s new Pioneers of African-American Cinema box set, available on both Blu-ray and DVD, offers an invaluable tour through an alternative history of American cinema in the early 20th century. The contents include 19 features and 12 shorts, not to mention various other fragments and supplements to provide historical context, adding up to an astonishingly rich and authentic portrait of black American life and culture during that period. All of these films, made between 1915 and 1946, were created far outside of Hollywood’s studio system. As Chicago was the birthplace of “race movies” (films made by and for African Americans) in the silent era, there is plenty of Chicago-related content in the set.

Disc one is especially Chicago-centric: it kicks off with three slapstick comedy shorts in a row, all made by the locally owned Ebony Film Corporation. These “two-reelers,” produced by the enterprising J. Luther Pollard, show the obvious influence of the Keystone Cops and are still quite funny by modern standards. The highlight is undoubtedly A Reckless Rover, in which the protagonist (Rastus Jones), on the run from the police, seeks refuge in a Chinese laundry and accidentally overdoses on opium. These shorts are followed by Oscar Micheaux’s 1920 Chicago-shot masterpiece Within Our Gates, an incendiary drama that climaxes with a taboo-busting lynching scene that explicitly critiques the similar climax of D.W. Griffith’s controversial The Birth of a Nation.

There are, of course, plenty of films in the set made outside of Chicago that will be of interest to movie lovers. Chief among them is Hellbound Train, a surreal visual allegory in which Satan is depicted as the literal engineer of a train taking the world’s sinners to hell. Made by traveling evangelists James and Eloyce Gist, it was screened not in commercial theaters at all but exclusively at church-sponsored gatherings across the country. It is but one of many examples of an early African-American film that has been notoriously difficult to see (or only been available previously in a poor quality transfer). Pioneers of African-American Cinema, co-curated by the University of Chicago’s Jacqueline Najuma Stewart, represents a remarkable feat of restoration and recovery that should go a long way towards helping to reintroduce this important part of our cinematic heritage to a contemporary audience.

Filmmaker, author and Film Studies instructor. END_OF_DOCUMENT_TOKEN_TO_BE_REPLACED
This entry was posted on Monday, August 1st, 2016 at 7:42 pm and tagged with Oscar Micheaux, Within Our Gates and posted in Blu-ray/DVD Reviews, Chicago Movies. You can follow any responses to this entry through the RSS 2.0 feed.
« Right Now, Wrong Then at Facets
Interview with Indie Outlook’s Matt Fagerholm »

One response to “Pioneers of African-American Cinema”