I wrote the following appreciation of Blue Velvet, on the occasion of its 30th anniversary, for Time Out Chicago. My original version, printed here in its entirety, is slightly longer than Time Out’s edit. 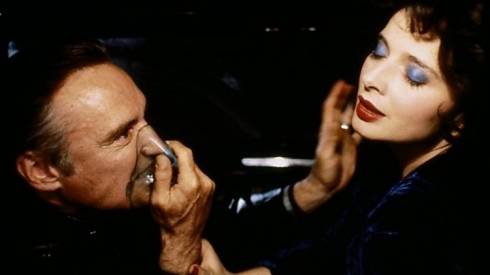 The long awaited third season of Twin Peaks, David Lynch and Mark Frost’s groundbreaking prime-time television series that originally ran from 1990-1991, is currently in post-production but not anticipated to air until the second quarter of 2017. Chicagoans breathlessly awaiting Showtime’s reboot can tide themselves over with a temporary fix of quintessential Lynchian weirdness by heading to the Music Box to catch a 30th anniversary engagement of Blue Velvet. Lynch’s controversial erotic thriller, arguably his seminal work, as well as one of the great American films of the 1980s, looks fresher than ever when seen from the vantage point of today; the director’s nightmarish vision of the evil lurking behind the white-picket fences of seemingly idyllic small-town America captures the schizophrenia of the Trump/Clinton era better than any contemporary film I know.

Blue Velvet’s continued relevance can perhaps be chalked up to the fact that it has always seemed out of time: a vision of America set in the Reagan era but nostalgically steeped in the 1950s that perversely pits the irresistible, Nancy Drew-esque amateur-sleuth team of Kyle MacLachlan and Laura Dern against Dennis Hopper’s sadistic, nitrous oxide-sniffing villain (still one of the most frightening performances in cinema history). Caught between these worlds is Isabella Rossellini’s mysterious roadhouse chanteuse, a masochistic femme fatale (and source of much of the film’s original controversy) who appears to have sprung from Lynch’s id like a golden sapling. Blue Velvet may express the reactionary desire to return to “simpler times” but it also fully — and troublingly — acknowledges the impossibility of doing so. For those who’ve never seen it, or only seen it on home video, the director’s famously meticulous attention to image and sound should come as a revelation in what the Music Box’s publicity is touting as a “gorgeous” new restoration.