My latest blog post for Time Out Chicago, concerning the second week of the Chicago Latino Film Festival, appeared two days ago. I’m not crazy about the way they edited my capsule review of the Colombian film Land and Shade, however, so I’m posting my original version in its entirety below. 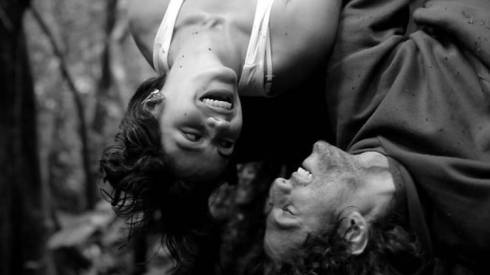 The 32nd annual Chicago Latino Film Festival kicked off last Friday, April 8 and continues through Thursday, April 21. While my recommendations for last week were a pair of thrillers from Mexico and Ecuador, my best bets for the second week are a beautiful, unconventional love story from Costa Rica and a formally masterful art film about agrarian hardship from Columbia.

Viaje (Spanish for “Journey”) is my favorite film at this year’s CLFF and should be considered essential viewing for anyone looking for a great “date movie” this weekend. The second film from Costa Rican writer/director Paz Fabrega tells the deceptively simple story of a man and a woman who meet cute (and drunk) at a costume party, have a one-night stand then spontaneously decide to go camping for the weekend, all the while conversing about love, sex, relationships and the remote possibility of a future together. While American indies that cover similar terrain tend to either focus on Men Behaving Badly or filter their dialogue through several layers of hipster irony, Fabrega’s characters are refreshingly sincere and emotionally forthright. Imagine a sexier — and more female-centric — version of Richard Linklater’s Before Sunset and you’ll have some idea of what Fabrega is up to in this charming and bittersweet two-hander.

Cesar Acevedo’s Land and Shade deservedly won the Camera d’Or (a prize given to first-time filmmakers) at last year’s Cannes Film Festival though its slow pace and use of daringly under-lit interiors won’t be for all tastes. More adventurous viewers, however, will be plenty rewarded by this quietly powerful drama about an elderly farmer returning to the family he had abandoned years before, reconnecting with his ex-wife and son (the latter of whom suffers from lung disease as a result of fires set to clear the sugar cane fields around them) and meeting his daughter-in-law and grandson for the first time. The tensions between the various family members are more hinted at than explicitly spelled out as the narrative expands to include documentary-like footage of sugar cane workers going on strike, which deftly sketches in the broader milieu.

Filmmaker, author and Film Studies instructor. END_OF_DOCUMENT_TOKEN_TO_BE_REPLACED
This entry was posted on Friday, April 15th, 2016 at 9:44 am and tagged with Cesar Acevedo, Land and Shade, Paz Fabrega, Viaje and posted in Film Festivals, Film Reviews, Uncategorized. You can follow any responses to this entry through the RSS 2.0 feed.
« A Spring Breakers Photo Tour
The Last Ten Movies I Saw »