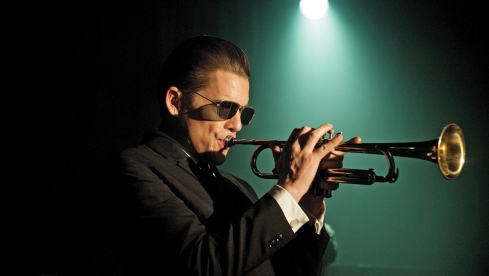 Now playing in limited release is Born to Be Blue, Robert Budreau’s terrific film about “cool jazz” legend Chet Baker. Thankfully eschewing the hokey, decades-spanning “rise/fall/rise” formula that became de rigueur after the success of Ray and Walk the Line, its modest scope focuses instead on a single chapter in Baker’s life: the trumpeter’s successful comeback in the late 1960s after being sidelined by a heroin addiction that resulted in jail-time and the loss of his front teeth. In the lead role, Ethan Hawke nails both the quiet passion and the insecurity of Baker (a “white boy from the West Coast” forever seeking the approbation of Dizzy Gillespie and Miles Davis); watch Hawke’s eyes during a front-porch confrontation between Baker and his father (Stephen McHattie) and you’ll see an entire lifetime of failure to meet parental expectations. Also superb: Hawke’s raspy-sweet voice as he croons “My Funny Valentine” and “I’ve Never Been in Love Before” live on camera.

In spite of being nominated for two Oscars for acting (and another two for screenwriting) and in spite of his eight-films-and-counting collaboration with Richard Linklater (one of the most significant actor/director pairings in contemporary movies), Hawke remains strangely underestimated as a performer. Is his acting too “effortless” in an era that tends to reward effort-ful yelling and crying? Whatever the case, this will hopefully change with the release of Born to Be Blue, a sharp biopic that deftly sidesteps genre clichés while hitting almost all the right notes as an emotionally gratifying character study (I personally could have done without the Miles Davis “slow clap” at the end). In addition to Hawke, Canadian director Budreau (That Beautiful Somewhere) coaxes fine performances from a cast that includes Carmen Ejogo as Baker’s love interest (a composite of several real-life women) and Callum Keith Rennie as Baker’s long-suffering manager.

Born to Be Blue is playing exclusively at the Landmark’s Century Centre Theatre in Chicago as well as via on-demand platforms.

On Thursday, April 7 at 7pm, my Flickering Empire co-author Adam Selzer and I will give a talk about our book at the Glen Ellyn Historical Society. We will be screening clips from films made in Chicago 100+ years ago and the event includes wine, cheese and cookies. Tickets cost $10 ($8 GEHS members) and may be purchased in advance in Glen Ellyn at Stacy’s Corners Store at the History Center, 800 N. Main St. Tuesday through Saturday from 10 a.m. – 5 p.m. For more information, call 630-469-1867 or visit the GEHS website.

Filmmaker, author and Film Studies instructor. END_OF_DOCUMENT_TOKEN_TO_BE_REPLACED
This entry was posted on Monday, April 4th, 2016 at 8:01 pm and tagged with Born to Be Blue, Robert Budreau and posted in Film Reviews, Uncategorized. You can follow any responses to this entry through the RSS 2.0 feed.
« Nick Alonzo’s SHITCAGO
The Last Ten Movies I Saw »

Leave a Reply to The Best Films of 2016 So Far: A Midyear Report | White City Cinema Cancel reply