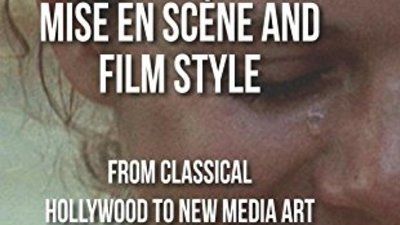 As a film-studies instructor, I’m always on the lookout for new texts to read between semesters that will help to recharge my batteries and provide me with new, fresh angles from which I can teach film aesthetics in the future. I am therefore grateful to Adrian Martin for writing Mise en Scene and Film Style: From Classical Hollywood to New Media Art (Palgrave 2015), a terrific new book of film theory that examines the slippery term “mise en scene” and how it has evolved over time from the point-of-view of both those who create cinema and those who write about it (one lenghty passage examining how critic/filmmaker Jacques Rivette has written and talked about mise en scene over the decades is particularly illuminating). This is what academic film writing should be but all too rarely is: Martin discusses previous modes of discourse (e.g., “classicism” and “post-structuralism”) concerning mise en scene and synthesizes those approaches in order to say new things about how mise en scene applies to not only commercial narrative cinema but also installations and exhibitions created by film and video artists, and even “reality television” (a phenomenon about which Martin admirably refuses to be dismissive). The whole thing is studded with close readings of sequences from individual films, from Brian DePalma’s Passion to Ritwik Ghatak’s The Golden Line, that effectively close the gap between theory and criticism and that should provide even seasoned cinephiles with a new list of titles to track down — I’m personally now very keen on checking out Jerzy Skolomowski’s Walkover and Philippe Grandrieux’s A New Life as soon as possible. Best of all, unlike a lot of academic film writing, Martin’s prose style is intellectually vibrant without being dry or resorting to jargon. The best passages, such as his discussion of the relationship between reality television and cinema across three different continents, are warm, humorous and even passionate (his academically unfashionable fondness for the exclamation point it is irresistible). I am now particularly looking forward to discussing the concepts of “social mise en scene” and “dispositifs” with students in the very near future. Highly recommended!