I can only add my voice to the chorus of praise for Tangerine, a refreshingly new kind of screwball comedy about the misadventures of a couple of transgender prostitutes working in Hollywood on Christmas Eve. The film has deservedly racked up raves and awards since its Sundance debut in January: radical in form — it was shot entirely on iPhones — as well as content, it’s my favorite American movie of the year (yep, I liked it even more than Inside Out). I recently had the great pleasure of interviewing the film’s director and co-writer, Sean Baker. Please note that a slightly different version of this interview appeared on the Time Out Chicago blog yesterday. 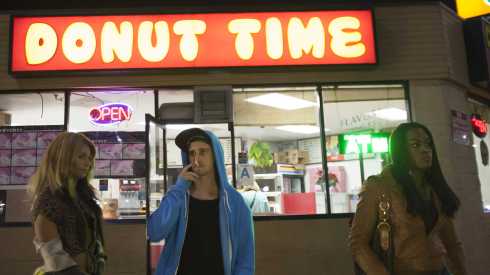 MGS: With a focus on the intimate lives of transgender prostitutes and a family of Armenian immigrants, Tangerine depicts characters and subcultures rarely seen in American movies. What kind of research did you do to ensure that the film would be as authentic as possible to the lives of these marginalized figures?

SB: It all comes down to time and collaboration. Chris Bergoch and I are cisgender white males from outside the world that we are focusing on and we knew that the only way to tackle this project responsibly and respectfully was to spend time in the research stage. Mya Taylor and Kitan Kiki Rodriguez were not only the film’s leads but our main consultants who introduced us to people from the area. We had very informal meetings where we heard numerous stories and anecdotes. Then when Chris and I finally wrote our treatment (based on everything we had heard or witnessed), we gave the treatment to Mya and Kitana to approve. Once approved, we moved forward with workshop sessions which helped give their voice to the dialogue. Then when we were shooting, there are constant approval and consulting. And in post production, Kitana was present and gave notes as I cut the film. So it was quite collaborative in every stage of making this film. For me, that’s the way you achieve authenticity. Same goes for the Armenian sub-plot but to a lesser degree. Karren Karagulian and Arsen Gregorian finessed all of our written dialogue with Armenian flare.

MGS: The visual style of Tangerine goes against expectations of what we think of as “microbudget cinema.” How did you decide on the look of the film and how important is it to you that people experience it on the big screen (as opposed to VOD)?

SB: Well, thank you. We did our best to elevate the iPhone footage to a cinematic level. We knew from the beginning that we were going to attempt to shoot something that was worthy of being shown on the big screen. We also set out to make a film that would get the audience engaged and active… so hopefully seeing it with an audience adds something to the experience. The saturation of the colors came during the tests. At first I de-saturated the colors because that’s a stylistic choice that fits with “neorealist” genre. But as soon as I looked at the desaturating images of Mya And Kiki, something didn’t feel right. The style clashed with their colorful personas… so I went the other way and pumped the colors through the roof. Then it suddenly felt right.

MGS: A lot has been made about the fact that Tangerine was shot with iPhone cameras but I thought that the editing was the most impressive aspect of the film. Can you talk about the importance of creating pacing and timing in a film comedy?

SB: Well I think that editing is 50% of directing. The editing room is where I’m discovering the film I just shot. And with comedy, I believe there is a pacing/timing that you have to find in the same way that a stand-up comedian has to time the set-up and punchline of the jokes. Also, I think that reactions are very important. I think that cutting to reactions (or the lack of) is where comedy lies.

SB: I have to go with The Merchant of Four Seasons. Whole lot of broken dreams.

Chicagoans can (and should) see Tangerine at its exclusive engagement at the Music Box Theater. You can check out the Red Band Trailer below: