Review Round-Up: A GIRL WALKS HOME ALONE AT NIGHT and THE BLUE ROOM

A Girl Walks Home Alone at Night, the uber-hip “Iranian vampire western” by first-time American director Ana Lily Amirpour, has recently become Kino/Lorber’s highest grossing theatrical release of all time. Since it will be returning to the Siskel Center in Chicago for another theatrical engagement beginning Friday, I thought I’d use the occasion to inaugurate a new feature where I post reviews in full on this blog that I originally wrote for other sites a while ago. Here are capsule reviews of the Amirpour film, which I enjoyed but wasn’t as taken with as a lot of other folks, and Mathieu Amalric’s criminally underseen erotic thriller The Blue Room. Both of these reviews originally appeared at Cine-File Chicago to coincide with their first Chicago runs. 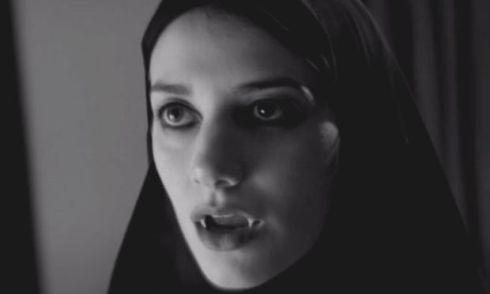 Distributor Kino/Lorber has cannily but misleadingly marketed A GIRL WALKS HOME ALONE AT NIGHT as the “first Iranian vampire western.” The film’s writer/director, Ana Lily Amirpour, was born in London to Iranian parents and raised in America; it was shot in Bakersfield, California (standing in for a fictional Iranian ghost town named “Bad City”); the cast consists almost entirely of Persian-American actors speaking Farsi; and, aside from a stray spaghetti-western-inflected song or two on the heavily non-diegetic soundtrack, the movie bears almost no relationship whatsoever to the western genre. It would be more accurate to describe this stylishly crafted, auspicious debut feature as an adult version of LET THE RIGHT ONE IN–a poignant love story about the coming together of two lonely souls, one of whom just happens to be a vampire. The fact that the titular bloodsucker is a hijab-wearing young woman (the excellent Sheila Vand) who only preys on “bad men” has drawn both political and feminist allegorical readings from critics, although this is arguably giving too much credit to a film whose substance is primarily to be found in its surface pleasures. Still, what a surface. Amirpour and director of photography Lyle Vincent weave a potent alchemical magic with their high-contrast black-and-white cinematography–Amirpour’s almost exclusive focus on nighttime exteriors in weird industrial locations (i.e., Bakersfield’s oil refineries, factories, and railroad yards) recalls the nightmarish atmosphere of her hero David Lynch’s ERASERHEAD but, combined with her impeccable taste in pop-music cues, creates a dreamy/druggy vibe that is both entrancing and wholly her own. It’s probably too early to tell whether the movie’s weaker second half is the result of Amirpour’s failure to build narrative momentum or a byproduct of the fact that her true talents may lie outside the realm of traditional storytelling altogether; A GIRL WALKS HOME ALONE AT NIGHT’s single best moment is a non-sequitur involving a drag-queen dancing with a balloon. In this startling non-narrative sequence, the charm of the choreography between performer and balloon is almost perfectly matched by the charm of the choreography between camera and performer. (2014, 99 min, DCP Digital) MGS

“Life is different when you live it and when you go back over it after.” So says Julien Gahyde (director and co-writer Mathieu Amalric), an adulterous–and possibly murderous–farm equipment sales rep, in response to a gendarme’s incessant questions concerning an ambiguous crime. Gahyde’s year-long affair with a beautiful but unstable pharmacist, Esther Despierre (co-writer Stephanie Cleau), also married, ends in tragedy but this erotic thriller is ingeniously constructed to only teasingly parcel out the narrative information; the nonlinear structure, which has its origins in Georges Simenon’s 1964 source novel, shuttles back and forth in time between the illicit lovers’ meetings in the titular hotel room and a series of police interrogations and eventual criminal trial much later, all the while daringly eliding the crime (or crimes) at the film’s center altogether. The “exchange of murders” conceit may be familiar from Alfred Hitchcock’s STRANGERS ON A TRAIN but the impressive formal control is Amalric’s own. As an actor, he’s long specialized in playing unhinged fuck-ups for other filmmakers but, under his own sure directorial hand, allows himself an impressive restraint to match the rigor of his mise-en-scene: Amalric’s famously expressive peepers do less work here than the disorienting close-ups and boxy aspect ratio, which combine to convey a potent sense of claustrophobia and doom. THE BLUE ROOM is as tight and compressed as Amalric’s earlier ON TOUR was messy and sprawling and, at only 76 minutes, manages to be both free of flab and capable of sticking to one’s ribs. Potential viewers are forewarned to pay special attention to the closing minutes–a final twist is so subtle it will go unnoticed by many. (2014, 76 min, DCP Digital) MGS