Samantha Fuller, daughter of maverick American filmmaker Samuel Fuller, makes an exceedingly promising directorial debut of her own with A Fuller Life, a fittingly unconventional documentary portrait of her father. I interviewed her via e-mail in advance of its Chicago premiere this weekend (it will screen at the Gene Siskel Film Center on Saturday, January 17 at 6:45 and Monday, January 19 at 6:00). My review of the film will appear soon either on this website or in Cine-File Chicago but let me just say for now that A Fuller Life is both a must for Fuller fans and an ideal introduction to his work for the uninitiated. You can find more info about the screenings on the Siskel Center’s website.

MGS: I know you conceived this film as a way of celebrating your father’s 100th birthday. I’m curious about your choice of only having the subjects read excerpts from his autobiography, A Third Face. How did you arrive at the decision to create the film in this unique way and did you ever consider making a more traditional documentary (i.e., with conventional interview segments)?

SF: Yes, the film was intended as a centennial celebration of my father’s life. See, as a child, he had always told me that we would have a big party when he turned 100, and I took him up on that. It didn’t matter that his body wasn’t present, since his spirit never left us. By having our guest readers speak his words, it served as a vehicle to bring his voice back to life. In this way, he felt very present during the entire process. My father’s films were quite unconventional, so there was no way I was going to make a conventional documentary about him. The film was entirely shot in his office. A place humorously called “the shack,” where nothing much has changed since his death in 1997. The participants loved that idea and read parts of his autobiography surrounded by rows of his favorite books, stacked scripts, film memorabilia, his beloved typewriter and of course a big fat cigar placed at their side. The actors were interviewed after reading their segment. The interviews will be featured on the DVD supplements.

MGS: How did you decide which segments from A Third Face to use? Also, did the subjects have any choice in which excerpts they read or did you assign the texts to the readers?

SF: I wanted to tell my father’s story chronologically, respecting the flow of his autobiography. The film is intended to reflect on his gusty life, brimming with multiple hard-hitting stories. It wasn’t easy deciding which segments to use, since every one is a good story in itself. I chose the ones that would give a sense of the life he lead. In the case that the audience is left wanting more, they can always pick up A Third Face and enjoy a real page turner. A Fuller Life is basically structured in three parts: the first section leads us through his youth, and his time as a young crime/freelance reporter. The second part describes his experience on the front lines of the Infantry during WWII, and how he survived major battles in North Africa, Sicily and D-Day. We witness the liberation of the Falkenau camps in Czechoslovakia through his words and his camera lens. The third, focuses on his career in Hollywood and how he successfully managed to combine work and family. The passages were assigned in a way that I trusted the readers would relate to most. Not once did any of them question my choice since I believe that they were indeed connected to the part of the story that they were telling. 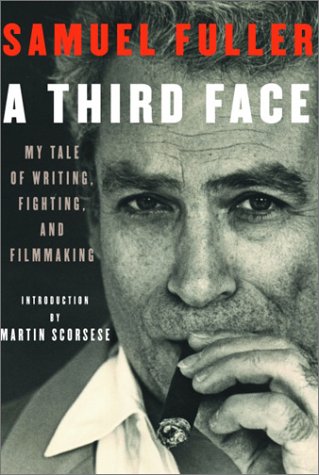 MGS: One of the things I loved about the use of different narrators was how they all delivered your father’s prose in a different style, which made the film very dynamic. Each segment was like a different song on a beautifully constructed mix-tape: some of the readers were matter-of-fact while others, notably Bill Duke, were incredibly dramatic. It was also very refreshing to hear a couple of female voices in the mix (Jennifer Beals and Constance Towers). Was there much rehearsal and/or discussion beforehand about how the texts would be read?

SF: Thank you for using the word dynamic in your question, since that was indeed what I was aiming for. Once again, in the spirit of my father’s films, which were always loaded with TNT in a certain form. Bill Duke happened to be the first one to read, and his performance was striking. He really is the one who channeled my father’s delivery most. After him, I thought that we better tone the other readers down, in order not to turn the film into a Sam impersonation film. I asked the rest of the readers to channel my father in a more subtle way, a talent that they were able to provide. The shoot was mostly in one or two takes, it was quick and to the point. Nobody had to memorize the text since they had it in front of them while filming. My father loved powerful female characters, so it felt natural to include a couple strong women in the mix.

MGS: Perhaps the most tantalizing aspect of the film was the use of documentary and home-movie footage that your father shot himself. The home movie scenes were playful and poignant but the WWII footage (especially from the concentration camp) was harrowing. What are your plans for the rest of the “100 reels of 16mm film” that you describe uncovering in the prologue?

SF: I digitized approximately three hours of footage that my father shot on his 16mm Bell & Howell camera. Some great home movies, but mostly film from the European liberation after D-Day. Only ten minutes were utilized in A Fuller Life, which leaves plenty material to make another documentary, which I’m currently working on. This time, the film will solely target WWII. I also have over 200 letters that my father wrote to his family during that time. Highlights from his correspondence will be included in the film. The structure will be similar to A Fuller Life in the sense that an actor will be reading excerpts from the letters, his voice will be heard over the images.

MGS: I’ve shown your father’s films in my Intro to Film classes and they’ve always gotten a very positive response (even though most of my students are unfamiliar with his life and work). If you had to pick a single film to use to introduce young people to the films of Sam Fuller, what would it be and why?

SF: I’m glad to hear that you are showing Fuller films in your class. There is so much to learn from them! The fact that most of his films were made with small budgets and tight schedules is encouraging to fellow filmmakers to go out and tell their stories. It’s difficult for me to pick a single film of his since I love them all, almost comparably to how one would love their siblings. But if I really had to pick just one that would introduce a new audience to his films and life, it would be the restored long version of The Big Red One. That is an autobiographical film about his experience as a Dogface in the U.S. Infantry during WWII. Sadly, he was never able to enjoy the release of the long version since it was completed after his death. Nonetheless, it is the version he had wished for, and it stayed true to his vision according to the script. The film deals with his grueling years in the army, yet is is layered with humor and emphases the absurdity of war. His character is named Zab, not Sam. Actually, there is a part of him dispersed into every character. It is his most personal film.

You can check out the trailer to A Fuller Life via YouTube below:

Filmmaker, author and Film Studies instructor. END_OF_DOCUMENT_TOKEN_TO_BE_REPLACED
This entry was posted on Monday, January 12th, 2015 at 8:24 am and tagged with A Fuller Life, Bill Duke, Sam Fuller, Samantha Fuller, The Big Red One and posted in Interviews. You can follow any responses to this entry through the RSS 2.0 feed.
« Goodbye to Language as Narrative / A Girl Walks Home Alone at Night
The Last Ten Movies I Saw »