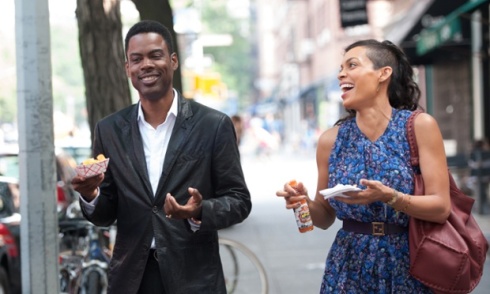 Though I’ve long admired his stand-up comedy, Top Five is the first film I’ve seen that was actually directed by Chris Rock (it’s his third feature). There are occasional tonal inconsistencies — there almost always are when anyone other than Jean Renoir tries to meld comedy and drama — but this is, on the whole, a smart, raunchy and very funny satire of celebrity and black life in 21st century America. As a cinematic vehicle, it is worthy of Rock’s considerable talents as a writer and performer but it’s also obvious that Rock is a real filmmaker too. The plot charts the relationship between Andre Allen (Rock), an actor who’s trying to branch out from his “early, funny work” and be taken seriously by starring in a drama about a slave rebellion in 18th century Haiti, and Chelsea Brown (Rosario Dawson), the New York Times reporter who’s assigned to spend the day interviewing him. The looming tragedy of Allen’s impending nuptials to a shallow reality-T.V. star (Gabrielle Union) is thrown into relief by the very real chemistry exhibited between Allen and Brown. It’s likely that some of the viewers who respond to the sweetness displayed in the romantic scenes, however, might also head for the aisles during a flashback constructed around an elaborate but crude gag involving four-way hotel-room sex between Allen, a couple of hookers and an unscrupulous promoter played by Cedric the Entertainer. Still, those who stick with it until the end might find Top Five‘s heart and brains sneaking up on them. It helps that Rock adopts some sturdy models for his well-structured film: the Woody Allen influence is obvious but it wasn’t until Andre’s revelatory third-act visit to the Comedy Cellar that I realized this is essentially a remake of Preston Sturges’s Sullivan’s Travels. I was also inordinately fond of how what seems like a throwaway joke about Charlie Chaplin being “the KRS-One of comedy” receives an unexpected and hilarious payoff about 30 minutes later when rapper DMX turns up to “sing” Chaplin’s immortal “Smile.” Finally, it must be noted that Rock really knows how to end a movie. Many lesser directors would’ve been tempted to include an extra scene, or at least a few more lines of dialogue, but the abruptness of Rock’s final cut to black flirts with the sublime. 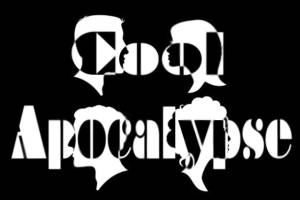 In the shameless promotion department, I’m happy to report that my indie feature Cool Apocalypse now has a teaser trailer, which I’m embedding via vimeo below. The film will have its first sneak-preview screening this Sunday night at a wine bar in Chicago for cast, crew, backers and invited guests only. A free wine tasting will precede the screening. Any Chicago-area readers of this blog who would like an invitation to the event should contact me at mikeygsmith@gmail.com and I can provide you with more details about the screening. Cheers!

Filmmaker, author and Film Studies instructor. END_OF_DOCUMENT_TOKEN_TO_BE_REPLACED
This entry was posted on Tuesday, December 23rd, 2014 at 10:11 am and tagged with Chris Rock, Top Five and posted in Film Reviews, Odds and Ends. You can follow any responses to this entry through the RSS 2.0 feed.
« Top 10 Home Video Releases of 2014
The Last Ten Movies I Saw »

4 responses to “Odds and Ends: Top Five and Cool Apocalypse”