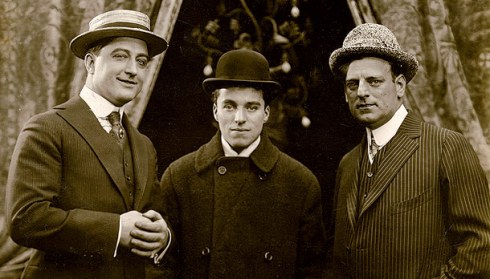 “I was sucked in from the first pages — by the subject, by intrigue, and by the authors’ accessible narrative style, simultaneously a tale told by fireside and a cliffhanger. Copious research in newspapers of the day, film archives, museums, personal interviews, other film scholars, and the like inform every page. I felt as if I were walking the lively old streets and eavesdropping on the major players as I read. Villains, heroes, adventurous visionaries, and short-sighted muddlers abound. In case the reader might slip into melancholy over Lost Chicago, though, Smith and Selzer provide two charming epilogues: one an Oscar-night summary of the main figures’ careers after the books’ end, and another on ‘Orson and Oscar’ (Welles and Micheaux) that is worth the price on its own.”

So reads the rather generous pull-quote from film scholar and author Sara Vaux (The Ethical Vision of Clint Eastwood) that adorns the back cover of Adam Selzer’s and my forthcoming book Flickering Empire, which I am happy to report is now dropping via Columbia University Press on January 20, almost two months earlier than originally scheduled. You can read Susan Doll’s foreword as well as lengthy excerpts from the book itself via amazon.com’s invaluable “Look Inside!” feature. Peep it: http://www.amazon.com/Flickering-Empire-Chicago-Invented-Industry/dp/0231174497

In other news, I have two new reviews at Cine-File — one for Nuri Bilge Ceylan’s Chekhovian chamber drama Winter Sleep and one for Daniel Ribeiro’s gay coming-of-age story The Way He Looks. They open at the Music Box Theater over the next few weeks and I heartily recommend both: http://cine-file.info/list-archive/2014/DEC-14-3.html

Filmmaker, author and Film Studies instructor. END_OF_DOCUMENT_TOKEN_TO_BE_REPLACED
This entry was posted on Friday, December 19th, 2014 at 9:55 am and posted in Uncategorized. You can follow any responses to this entry through the RSS 2.0 feed.
« The Last Ten Movies I Saw
Top 10 Home Video Releases of 2014 »