Odds and Ends: Welcome to New York and Bird People 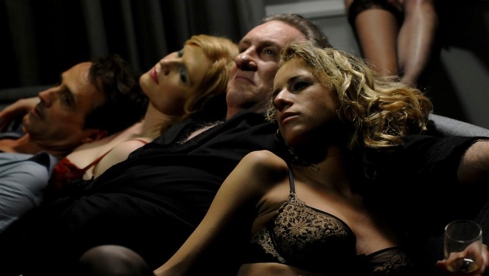 Welcome to New York, Abel Ferrara’s thinly disguised dramatization of the Dominique Strauss Kahn scandal starring Gerard Depardieu and Jacqueline Bisset, has predictably been a lightning rod for controversy since premiering direct to video-on-demand in France last May. The film begins with a series of debauched sexual encounters (let’s just say that champagne and ice cream are put to creative use) between Depardieu’s “Mr. Devereaux,” an international financial bigwig, and hired prostitutes — before culminating in a recreation of Kahn’s alleged sexual assault of a Guinean hotel maid (for which the IMF chief was exonerated but nonetheless forever sinking his Presidential hopes). If you can make it past the chaos of this opening 30-minute bacchanal, which not only avoids titillation but feels awkward and depressing by design (courtesy of Ken Kelsch’s cool and distanced camerawork), the film then fascinatingly shifts registers for its second and third acts. Next up are lengthy scenes showing Devereaux being arrested, booked and taken from one holding cell to another by real police officers — some of whom were involved in Kahn’s actual booking. This sequence is practically a documentary and contains the only moments in the movie where one is likely to feel sympathy for the monstrous Devereaux (especially when the now-morbidly obese Depardieu is forced to strip naked). The final act sees Devereaux, free on bail, being joined by his wife, Simone (Bisset), in a New York townhouse and engaging in a series of electrifying domestic arguments in which the Gallic thesps are really allowed to let it fly. Many critics have drawn comparisons between Welcome to New York and Martin Scorsese’s The Wolf of Wall Street since both films use sexual depravity as a metaphor for the decadence of late capitalism. The differences between the directors’ approaches, however, are probably more instructive: while I find nothing immoral or irresponsible about Scorsese’s making a dark screwball comedy out of a real-life tragedy, I have to confess that Ferrara’s take — an uncompromising “feel bad” venture in the vein of Pasolini’s Salo — is probably more apposite. One measure of its effectiveness? Kahn and his wife are suing the filmmakers.

IFC Films will release Welcome to New York in a censored R-rated version in the U.S. next year. Ferrara’s original version can be illegally downloaded via the usual places.

Gary Newman (The Good Wife‘s Josh Charles, superbly understated) is a Silicon Valley executive who travels to France on business and, while bivouacking at the Paris Hilton, experiences a panic attack that will alter his destiny forever. His story is intercut with that of Audrey Camuzet (Anaïs Demoustier, dangerously cute), a young, working-class student and hotel maid whose job both pays the bills and affords her the opportunity to improve her English by conversing with the guests. While the parallel editing between these narrative threads serves to clue viewers in that the characters’ lives will eventually cross, exactly how, when and why this happens is in a manner so eccentric that that no first-time viewer will ever see it coming. Pascale Ferran’s whimsical comedy/drama takes such a bizarre left turn at about the one hour mark, in fact, that even many of the viewers who have admired it up to that point are likely to mentally check out. Those who are searching for something delightfully different, however, may find themselves rewarded by an eccentric character study that ends up being less interested in realism than it might first appear. The history of the cinema is in many ways the history of showing how lonely souls connect; I, for one, am grateful to Ferran for presenting her particular version within the context of a broader allegory about the desire for human transcendence. When viewed in this light, much of the film’s first half makes a different kind of retrospective sense — such as the way the filmmakers casually eavesdrop on passengers’ conversations on a commuter train, and the way a child looks up with amazement — of a kind that the mature, “adult” Newman is no longer capable of — at the awe-inspiring sight of a plane taking flight.

Bird People is currently available for “rent” on various digital platforms including iTunes and Amazon.com.

Filmmaker, author and Film Studies instructor. END_OF_DOCUMENT_TOKEN_TO_BE_REPLACED
This entry was posted on Monday, September 29th, 2014 at 7:11 am and tagged with Abel Ferrara, Bird People, Pascale Ferran, Welcome to New York and posted in Film Reviews, Odds and Ends. You can follow any responses to this entry through the RSS 2.0 feed.
« The Last Ten Movies I Saw
Author Interview: Laurence Knapp »

2 responses to “Odds and Ends: Welcome to New York and Bird People”