Odds and Ends: A Touch of Sin 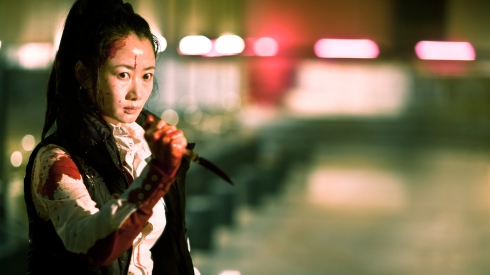 I recently revisited my favorite film of 2013, Jia Zhang-Ke’s A Touch of Sin, thanks to Kino/Lorber’s stellar new Blu-ray, an occasion that caused me to realize how much my initial long review barely scratched the surface of this great work of art. Upon rewatching Jia’s bold, funny, shocking, beautiful and torn-from-the-headlines anthology (it was inspired by items that first appeared on Weibo, China’s version of Twitter and apparently a widespread source of important but often “unofficial” news for many Chinese citizens), what stands out to me the most now are the way each of the film’s four stories are linked in ways both obvious and subtle. So here are some additional thoughts on some of the fascinating correspondences between the different segments of A Touch of Sin: the first and the second stories are linked by gun violence, and it is further implied that the protagonists of each story may not have committed murder if they had not readily had firearms at their disposal. The third and the fourth stories are linked by the fact that both protagonists have recently been romantically jilted, and thus they share a possible indirect psychological motive for their aberrant behavior. The first and the third stories are also linked by a potential motive — revenge (the protagonists, who inflict violence on others, do so only after violence has been inflicted on them). And the second and fourth stories deal with rootless characters whose violence may be seen as resulting from profound feelings of dislocation. Finally, all four stories prominently feature a symbolic use of animals and animal imagery: from the horse being flogged in the first story, to the Chicago Bulls logo on a killer’s stocking cap in the second, to myriad snake imagery in the third (including an excerpt from Tsui Hark’s Green Snake), to fish seen imprisoned in an aquarium in the fourth. In each instance, the lives of the protagonists seem to correspond to these “spirit animals.” 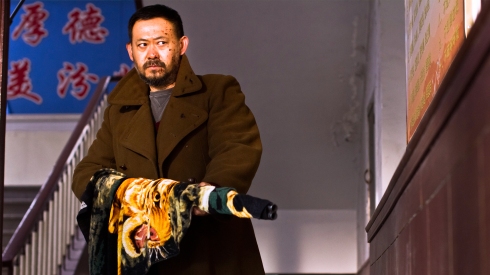 Even more fascinating are the varying degrees to which Jia has purposefully stylized the climactic “acts of violence” in each of the four segments, which, taken together, turn the whole project into a meditation on both real-world violence and its representation in the movies. (How many other films in recent decades, instead of merely being violent, actually make violence their subject and have something interesting to say about it? A History of Violence? Unforgiven? Anything else?) The most stylized action in A Touch of Sin occurs in the third story where Yu Xiao (Zhao Tao), a receptionist at a massage parlor, slices a man to ribbons after he harasses her by making unwanted sexual advances and repeatedly hitting her over the head with a wad of cash. The fact that Yu reveals an unexpected and almost-superhuman dexterity with a knife, not to mention that she sports a topknot ponytail like a wuxia heroine, places this exhilarating sequence squarely in the realm of myth (not unlike the climax of the aforementioned Unforgiven). The protagonist of the first story, Dahai (Jiang Wu) is almost as sympathetic as Yu as he avenges himself against the crimes of corrupt politicians and local business leaders in his village. The violence caused by Dahai’s shotgun blasts is, however, depicted in a more realistic and horrifying fashion than Yu’s blade work. The saddest moment in the film is the self-inflicted violence of the fourth story (which sees Jia utilizing CGI in a way that allows him to recreate the suicide in Rossellini’s Germany Year Zero but in more excruciating detail). The scariest violence, by far, occurs in the second story: Zhou San (Wang Baoqiang) is a drifter on a motorcycle who, it is implied, gets some kind of sexual thrill from discharging a gun and plots an elaborate robbery as a mere pretext for the purpose of being able to shoot two people. Such a mindset is, of course, unfathomable, which is exactly why stories of violence in the media leave so many of us frustrated. Jia may not provide answers but we should all be grateful that he has at least been able to dramatize our questions about such matters as intelligently as he has in A Touch of Sin. The film even ends with a rhetorical (sung) question: “Do you understand your sin?”

Kino/Lorber’s stellar Blu-ray of A Touch of Sin can be purchased on amazon here: http://www.amazon.com/Touch-Sin-Blu-ray-Tian-Ding/dp/B00H91LWBY

You can view the trailer for A Touch of Sin via YouTube below:

Filmmaker, author and Film Studies instructor. END_OF_DOCUMENT_TOKEN_TO_BE_REPLACED
This entry was posted on Monday, June 2nd, 2014 at 7:12 am and tagged with A Touch of Sin, Jia Zhang-Ke and posted in Blu-ray/DVD Reviews, Film Reviews, Odds and Ends. You can follow any responses to this entry through the RSS 2.0 feed.
« Filmmaker Interview: Aron Gaudet and Gita Pullapilly
A Silent British Cinema Primer »

3 responses to “Odds and Ends: A Touch of Sin”