Now Playing: Under the Skin

The bottom line: You don’t want to wake up, do you?

Now playing at Landmark’s Century Centre Cinema in Chicago is Under the Skin, the third and best feature film to date by British writer/director Jonathan Glazer. Based on an acclaimed science-fiction novel by Michel Faber, which I haven’t read but which the filmmakers have apparently taken many liberties in adapting, the end result is an exciting, disturbing, sexy, visually ravishing, thought-provoking and wholly singular filmgoing experience that stands as my favorite movie of the year so far. (While that may not sound like high praise in early April, keep in mind that I’ve already seen what I would consider an unusual number of great or near-great films in 2014 including: The Strange Little Cat, A Spell to Ward Off the Darkness, Nymphomaniac Vol. 1, Jimmy P. (Psychotherapy of a Plains Indian), Journey to the West, Gloria and The Grand Budapest Hotel. While Glazer made his name as a director of music videos and television commercials in the 1990s, his subsequent features Sexy Beast (2000) and Birth (2004), notable for their meticulous attention to detail as well as their flirtation with “big ideas,” have caused some critics to favorably compare him to none other than Stanley Kubrick. Glazer himself appeared to encourage such comparisons by including what seemed like more than a few winking references to the late master’s work in his underrated and misunderstood second feature (critical appraisal of Birth was unfortunately drowned out at the time of its release by a non-controversy involving a scene where Nicole Kidman’s character took a bath with a pre-adolescent boy). Under the Skin both validates the Kubrick comparisons as well as renders them irrelevant: it’s a visionary work of art in its own right that doesn’t look or sound like anything other than a “Jonathan Glazer movie,” and that should be higher praise than comparing it to motion pictures by great directors from the past. 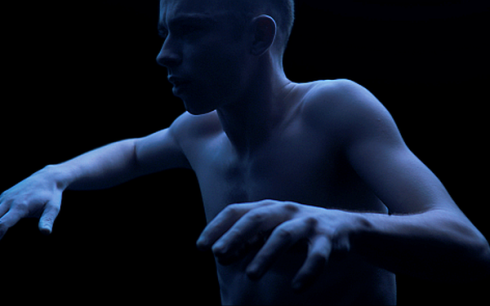 Perhaps what is most impressive about Under the Skin is the way that Glazer, much more than in his previous movies, tells this story more through the images than the dialogue, rendering what little the characters do say as secondary or unimportant. By contrast, Mica Levi’s brilliant avant-garde score, which mixes metronomic percussion with what sounds like an unnerving loop of a wailing viola, is essential in establishing the film’s unique tone: the ethereal score seamlessly blends with the real-world effects on the soundtrack (it is difficult at times to distinguish music from effects) in order to bring viewers closer to the consciousness of the extraterrestrial protagonist. Under the Skin audaciously follows the exploits of an unnamed alien disguised as a human (the press kit refers to her as “Laura” but no one calls her that in the movie and none of the characters are given names in the closing credits) who arrives on earth — Scotland, to be precise — with the intention of seducing and killing men for vague, nefarious purposes. It is implied that these murders are part of an organ-harvesting scheme although Glazer and co-writer Walter Campbell apparently chose to downplay this aspect of the plot as it originally appeared in the novel — a wise choice in my opinion. Instead, the film sticks uncomfortably close to the sensory impressions of this alien character (Scarlett Johansson, almost unrecognizable in black bangs, fur coat and stonewashed jeans) as she experiences life on an unfamiliar planet. Glazer’s ability to capture the modern world as it might be seen and heard through alien eyes and ears is exhilarating; the early sections of Under the Skin contain a fair number of scenes of her driving around Glasgow in a nondescript white van, trying to pick up lone men on the street. Astonishingly, most of these scenes were shot with hidden cameras — with the male “characters” being unaware that the woman with whom they were interacting was the famous Johansson, who sports a credible English accent, or indeed that they were even appearing in a movie at all (release forms were obtained only after the scenes were shot).

To give away more of the plot would be a crime but I would like to note that the film’s most tantalizing aspect may be the way in which the alien seems to develop a conscience after she kills a surfer on a rocky beach. This is also, crucially, the only murder that is explicitly shown in the movie. All of the other murders are represented symbolically by showing naked men walking after the scantily clad or nude alien on a pitch-black set and slowly sinking into a pool of inky liquid while she remains on solid ground a few feet in front of them. (This impressive feat of engineering also provides some of the most spectacular visuals of any sci-fi film of recent years.) The alien soon begins to exhibit more human characteristics, from falling down in the street to showing mercy to a potential victim who is facially disfigured to allowing her physical appearance to become increasingly grimy. Glazer’s objective here, I think, is not dissimilar from what Robert Bresson achieved so majestically in Au Hasard Balthazar in 1966. Much like how Bresson had a donkey function as a blank slate upon which the vices of mankind are imprinted, Glazer presents an alien succubus as a kind of crazy-mirror for some of the basest instincts of humanity; it is more than a little sad that so many men seem so eager to jump, for no good reason, into a van being driven by a total stranger — even if that stranger happens to look like Scarlett Johansson. The casting of Johansson, however, is precisely Glazer’s masterstroke. While she may not be a great actress, she is a bona fide movie star for a reason, and never before has she used/allowed her star persona to be used so intelligently as here. Late in the film, the alien is stripped of its human form and stares at the face of Johansson that it has been wearing like a mask, a haunting moment that can be seen as a disturbing commentary on the process of image-making and celebrity. This one brief shot in Under the Skin accomplishes something that thousands of hours of gossip-news television shows cannot: it makes one sympathize with, indeed want to weep for, anyone bearing the burden of wearing celebrity skin.

The trailer for Under the Skin can be viewed via YouTube below:

Filmmaker, author and Film Studies instructor. END_OF_DOCUMENT_TOKEN_TO_BE_REPLACED
This entry was posted on Monday, April 21st, 2014 at 8:44 am and tagged with Jonathan Glazer, Under the Skin and posted in Film Reviews. You can follow any responses to this entry through the RSS 2.0 feed.
« Happy Easter from White City Cinema
The Last Ten Movies I Saw »

56 responses to “Now Playing: Under the Skin”