Odds and Ends: Journey to the West and The Men of Dodge City

Here are capsule reviews of two films currently streaming online for free that I think are well worth your time.

I don’t have time to write a proper full review but I wanted to alert my readers ASAP to the fact that the latest film from Taiwanese master Tsai Ming-liang, Journey to the West, which just premiered to much fanfare at the Berlin International Film Festival, is streaming for free for one week at The Seventh Art, a terrific, independently produced “video magazine” based in Canada. Tsai’s 53-minute movie, starring two of the world’s best physical actors (Taiwan’s Lee Kang-sheng and France’s Denis Lavant) comes just one year after his formidable Stray Dogs also bowed in Berlin, at which time Tsai spoke of retiring. Cinephiles should be thankful that he didn’t: not only is Journey to the West a great mini-movie, it proves to be yet another logical step in the evolution of Tsai’s singular brand of filmmaking. A friend of mine complained that Stray Dogs was an unsatisfying hybrid between a narrative film and a museum installation piece; I wonder how he will feel about this one, which dispenses with narrative and dialogue altogether. The aptly titled Journey to the West consists of almost nothing but a few shots, done in Tsai’s customary long-take style, of a red-robed monk (Lee) walking almost as slow as humanly possible around densely populated areas of Marseilles, France. Eventually, he is joined by a man in Western clothing (Lavant) who walks behind him at the same snail’s pace. Different viewers will likely take different things away from this experiment; I personally saw it as a complex statement about how ancient Eastern religions seem “out of step” with the fast pace of modern Western life and how there are elements of contemporary Western civilization that, for this very reason, feel irresistibly drawn towards Eastern philosophy. Regardless of how you interpret it, what’s not in dispute is the film’s extreme formal beauty (the shot of the monk, surrounded by what looks like a red halo created by his robe, walking down a flight of subway stairs is astonishing), as well as its unexpected, ineffable sense of humor.

You can watch Journey to the West in its entirety at The Seventh Art here: 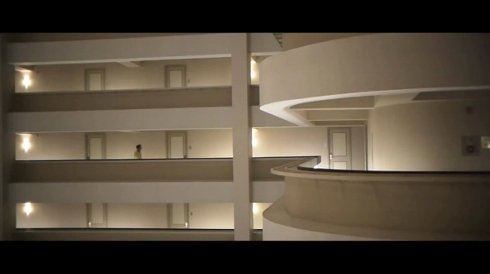 The title The Men of Dodge City may evoke images of the Budd Boetticher/Randolph Scott westerns of the 1950s but you would be hard pressed to find a film as uniquely contemporary — and urban — as this debut feature by director/cinematographer Nandan Rao. The title characters are three 20-something friends, J., Ben and Zach (each of whom is named, as is often the case with micro-budget indies, for the actors who portray them — Jesse Rudoy, Ben Rickles and Zach Weintraub), who purchase an abandoned church in an economically depressed area of Detroit. With the help of a government grant, they begin renovating the space with the vague goal of turning it into an arts center. In a series of near-plotless scenes that feel semi-improvised (no writers are credited), the characters work, play, and debate the morality of their actions: are they selfish interlopers? Should the arts center “give back” to the surrounding community? Which one of them should date Sophia (Sophia Takal)?

Rao has cited Lucrecia Martel as a stylistic influence and the first lady of Argentinian cinema’s DNA is all over this — from the lack of traditional narrative exposition (scenes typically begin with characters in mid-conversation, plunging viewers into chaos and often forcing us to puzzle out the meaning in hindsight) to a cinematographic style that favors the use of shallow focus and long takes. If Rao is not yet anywhere near Martel’s level of formal mastery (his sound design is primitive by comparison and some of the longer takes devolve into longueurs), this is still an impressive and uncommonly assured first film. I especially appreciate the absence of exterior establishing shots, which heightens Rao’s poetic feel for the interior design of his locations and “makes strange” places that might seem familiar and banal in the hands of a lesser director: scenes set in the church and a high-rise hotel, in particular, feel almost like something out of science-fiction and, to paraphrase something Luis Bunuel once said about Buster Keaton’s College, possess the cool beauty of a bathroom.

You can watch The Men of Dodge City at Kentucker Audley’s invaluable site, Nobudge.com (where this review originally appeared last year), below:

Filmmaker, author and Film Studies instructor. END_OF_DOCUMENT_TOKEN_TO_BE_REPLACED
This entry was posted on Friday, March 21st, 2014 at 2:15 pm and tagged with Journey to the West, Kentucker Audley, Nandan Rao, The Men of Dodge City, Tsai Ming-Liang and posted in Film Reviews. You can follow any responses to this entry through the RSS 2.0 feed.
« The Last Ten Movies I Saw
Jacques-in-the-Box »

6 responses to “Odds and Ends: Journey to the West and The Men of Dodge City”