3 Comments | posted in The Last Ten Movies I Saw

Now playing at Landmark’s Century Center Theatre in Chicago is Gloria, a terrific 2013 Chilean comedy/drama from the young director Sebastian Lelio. While South American cinema has for decades been tragically — and ironically, given our geographical and linguistic affinities — under-distributed in North America, especially in comparison to its European and Asian counterparts, Gloria has arrived here with a fair amount of positive buzz. Most of the praise has deservedly been centered on the brilliant Paulina Garcia, who won the Best Actress prize at the Berlin International Film Festival where Gloria premiered last year. I was first hipped to Lelio’s movie by the Chilean director Fernando Lavanderos (whom I interviewed shortly afterwards and whose Las Cosas Como Son was one of the best films to play Chicago in 2013 that hardly anyone saw). Lavanderos explained that he and Lelio had worked together years ago on a documentary television show about a family living in the slums of Santiago but when he asked if I was familiar with “Gloria,” I mistakenly assumed he was referring to the 1980 John Cassavetes movie by the same title. “No, no,” Lavanderos said, laughing. “This year was the premiere of Gloria, a Chilean film influenced by Cassavetes.” This threw me when I got around to seeing Lelio’s movie recently; the Cassavetes connection does not seem obvious at first — Lelio eschews the emotional histrionics and harrowing quality associated with the legendary independent American director’s best work and allows his movie to coast by on a good deal of low-key charm instead — but both filmmakers might be said to favor a character-centric cinema that feels unusually and impressively attuned to the emotional textures of everyday life. Like Cassavetes, Lelio trains a patient camera eye on his lead character and audaciously resists taking easy emotional shortcuts. As a result, I found his Gloria to be, well, glorious. 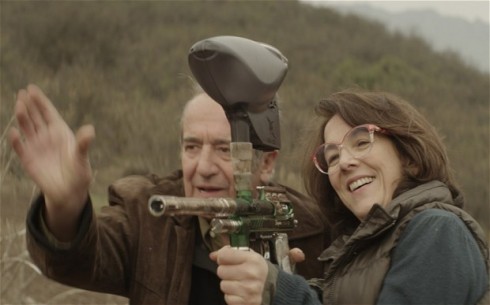 It has become an axiomatic truth that the vast majority of Hollywood movies have no substantial roles to offer actresses over 40. It is therefore heartening to see a new Latin American movie that is focused so intensely on a female character in her early 50s: Paulina Garcia has to carry the movie by appearing, as the resilient title character, in literally every scene. Even more impressive is how Gloria, a divorcee, is not a stereotypical neurotic single woman desperate for midlife romance (though she does briefly find that) but rather an ordinary, smart, sexy, well-adjusted woman who is content to live alone, loves her grown children, works at what looks like a mundane office job, listens to pop music, and spends her free time dancing at her local discotheque. (She is not perfect. We also see that she can be vindictive and even, on occasion, self-destructive.) It is while dancing at the club that Gloria, whose good looks are almost obscured by the unfashionably large frames of her prescription glasses, meets Rodolfo (Sergio Hernández), a 60-something gentleman and recent divorcee who picks her up by asking if she’s “always this happy,” a line that makes her erupt into laughter. A passionate affair ensues. (I should point out here that I also found it refreshing to see erotic sex scenes — and nudity — involving actors in their 50s and 60s. The world would be a much healthier place if it were more common to see love scenes featuring actors of diverse ages and body types.) The film’s central conflict eventually emerges from Rodolpho’s commitment issues — specifically Gloria’s annoyance at how he seems to prioritize attending to the needs of his two adult daughters and ex-wife, all of whom he supports financially. But this is, thankfully, also a movie that is in no real hurry to do anything: it does not put its characters through the paces of a formulaic plot, nor does it seem eager to give viewers a familiar set of emotional experiences. Lelio’s camera merely observes Gloria and if audiences have fallen in love with her, that’s likely because Lelio has not insisted that we have to.

One of my favorite aspects of Gloria is how the film resembles a musical and indeed occasionally seems to threaten turning into one without ever doing so. One of Gloria’s defining characteristics is her love of pop songs and Lelio features more than a few scenes of her singing along to them — sometimes while driving to work and listening to the radio but also, in one exceptionally lovely sequence, while she is waxing her legs at home. These scenes provide two crucial functions: to establish the rhythm of this woman’s life, the routines of which become the rhythm of the movie, and to subtly clue viewers into her emotional state: one of the film’s key sequences features Gloria attending a house party whose revelers engage in an impromptu jam of a song by Antonio Carlos Jobim. Gloria stands apart from the crowd and sings softly along, her voice barely audible. The counterpoint between her and the other party guests reveals her sadness in the fashion of a true movie musical, prompting viewers to reflect upon exactly what in the preceding scenes may have caused her to feel this way. After a muted climax involving revenge that is too good to give away, the film ends with its most energizing sequence: Gloria attends a wedding reception and, after hesitating for a few moments, joins the wedding guests on the dance floor. Her theme song is playing, the Spanish-language version of Umberto Tozzi’s “Gloria” (made famous in the U.S. by Laura Brannigan’s English-language cover). Singing and dancing with more abandon than she has at any other point in the movie, Gloria loses herself in the music and the moment. The meaning is clear: she will survive and she will endure. I was depressed to come home from seeing Gloria and log onto the Internet Movie Database to note that some user reviews referred to it as “boring,” “pointless” and “slow.” Have viewers become so accustomed to formulas and cliches that they cannot see the “point” of a movie in which those qualities are absent? I personally felt I could have watched this woman’s life unfold onscreen forever.

You can view the trailer for Gloria on YouTube below: