Odds and Ends: Alfonso Cuaron’s Gravity/”Spotlight on Horror” in Wilmette 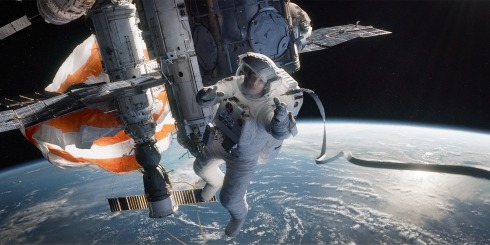 Alfonso Cuaron’s Gravity, a space opera starring America’s sweethearts Sandra Bullock and George Clooney, is a pretty good movie that has unfortunately been propped up as some kind of visionary work of art by critics who are starved to see more “adult fare” coming out of Hollywood. This is too bad because what this modest sci-fi epic does, it does very well; that is to say, it uses masterful cinematography — by the peerless Emanuel Lubezki, the go-to D.P. for both Cuaron and Terrence Malick — and state-of-the-art special effects to tell a familiar, Castaway-like story of man-versus-nature: Bullock’s astronaut Ryan Stone (who, incidentally, hails from Lake Zurich, Illinois — booyah!) is stranded in space after her shuttle has been destroyed by floating debris that has also left all of her fellow crew members dead save for Clooney’s Matt Kowalski (who ends up being the only other character to appear onscreen). The plot unfolds as a series of suspenseful set-pieces as Stone contends with not only the deadly debris, which threatens to kill her on at least three separate occasions, but also a spacecraft with no fuel, a spacesuit with no oxygen, potentially being drowned or burned to death, and so on and so forth.

As in the best Pixar movies, the best and most daring moments in Gravity come at the beginning, especially the wondrous 13-minute long take that opens the film, before it settles into something more disappointingly conventional. It’s all quite visceral and exciting until Stone mentions the recent death of her beloved daughter, which introduces Psychological Motivation, an Emotional Character Arc, and all of that other stuff taught in Screenwriting 101. (What was Jean-Luc Godard’s line about the viewer not caring where John Wayne came from or what his father did for a living in Rio Bravo? Cuaron certainly doesn’t trust his audience as much as Howard Hawks did.) I hasten to add that the problem here is not that Gravity has a “human side” but rather how its human side is so obviously the calculated result of Alfonso Cuaron (and his son and co-screenwriter Jonas) attempting to appease what must have been some very nervous financial backers — some compromises were inevitable, I suppose, given the astronomical budget. So, by all means, see this on the big screen and bask in its awesome cinematic qualities. Just don’t listen to anyone who calls it an “intellectual blockbuster” or insists that it has any “philosophical” interest. As for those critics claiming it’s some kind of avant-garde film that happens to have been made with Hollywood resources, I think they must be smoking something stronger than what allowed Andrew Sarris to finally see the glories of 2001: A Space Odyssey, a truly visionary sci-fi movie with which Gravity shouldn’t be mentioned in the same breath.

Mike at the Movies: Spotlight on Horror

On Sunday, October 27th, at 2:00 pm I will be giving a special Halloween-themed talk at the Wilmette Public Library about the history of the horror movie. Any of my students who attend this program can earn up to twenty points extra credit towards their grade. Please see the extra credit page of your course website for more information. Below is a synopsis of the presentation I wrote for the library’s website:

The horror film has long been one of the most popular and resilient movie genres. This special Halloween presentation will highlight various horror subgenres (psychological, supernatural and physical) through the use of clips ranging from German Expressionist masterpieces of the 1920s to classic chillers from Hollywood’s golden age to more recent films tagged with the controversial “Asian extreme” label.

Hope to see you there! For more information, check out the Wilmette Public Library’s “Off the Shelf” newsletter:

Filmmaker, author and Film Studies instructor. END_OF_DOCUMENT_TOKEN_TO_BE_REPLACED
This entry was posted on Wednesday, October 9th, 2013 at 8:30 am and tagged with Alfonso Cuaron, David Cronenberg, Gravity, The Fly and posted in Film Reviews, Odds and Ends. You can follow any responses to this entry through the RSS 2.0 feed.
« The Last Ten Movies I Saw
James Gray at CIFF »

6 responses to “Odds and Ends: Alfonso Cuaron’s Gravity/”Spotlight on Horror” in Wilmette”