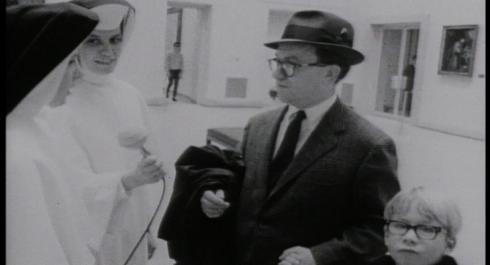 Chicago-based Kartemquin Films has made a name for itself over the past couple decades for producing acclaimed, socially conscious documentaries such as Hoop Dreams (1994), Vietnam, Long Time Coming (1998), Stevie (2002) and The Interrupters (2011). But only the most seasoned cinephiles — or Chicago-philes — are likely to know that Kartemquin’s roots stretch all the way back to the mid-Sixties when the company was formed by University of Chicago alumni Stan Karter, Jerry Temaner and Gordon Quinn (who named their brainchild after the first three letters of each of their last names). The most well-known of Kartemquin’s early features is probably Inquiring Nuns, which was shot over the course of one long Sunday in 1967 and released the following year. It is a fascinating time-capsule of both Chicago and America during the height of the Vietnam war, a work of urban anthropology clearly inspired by Jean Rouch (whose Chronicle of a Summer is referenced by one of the offscreen filmmakers in the opening scene). It also remains a great and truly under-appreciated document of its time, especially in comparison to the work of more famous contemporaneous cinema verite directors like D.A. Pennebaker, Richard Leacock and the Maysles brothers. Fortunately for movie lovers, Inquiring Nuns is available in a superb-quality DVD put out by Facets Multimedia in 2009, which means the film is at least easy to track down for those lucky enough to know about it.

The compelling premise of the movie, directed by Gordon Quinn, is that the filmmakers follow two young Catholic nuns, Sister Arne and Sister Campion (the latter of whom will make my long-threatened list of Cinema’s Hottest Nuns whenever I get around to compiling it), as they travel around Chicago asking random people the question “Are you happy?” The sisters manage to cover a lot of ground in just one day, stopping at the Museum of Science and Industry, the Art Institute, a South Side church, a co-op grocery store and more, and interview an array of subjects of impressively diverse races and ages. One particularly fortuitous interview is a random encounter with Stepin Fetchit, the controversial black comedic actor and veteran of films by John Ford. The sisters clearly have no idea who Fetchit is but he nonetheless plies them with photographs of himself with the likes of Will Rogers and Shirley Temple and talks of how he pissed away a fortune of seven million dollars (he was the first African-American millionaire) but still considers himself happy because he goes to “communion” every day. Ford fans will want to see the movie for this interview alone: it represents a rare chance to hear Fetchit speak in his “real” voice (as opposed to the cartoonish slur he always used in Hollywood movies).

In addition to offering the appealing prospect of seeing a now-vanished Chicago, the film is also noteworthy for the unique responses that the nuns receive to their questions. Most respondents answer thoughtfully and seriously (with some even ruminating philosophically on the nature of happiness) and talk about what they would require in order to be happier. Interestingly, many of the interview subjects (including a man and a woman who identify themselves as belonging to a band called “The Bubblegum Orgy”) express dissatisfaction with various social and political ills — especially the U.S. government’s involvement in Vietnam — and it’s hard not to imagine that a comparable survey of random Chicagoans today would yield responses that seem less well-informed. But, then again, maybe not. We’ll never know how many uninteresting or superficial interviews ended up on the cutting room floor when Quinn was editing his film; or, perhaps more importantly, how many of the interview subjects in the finished product wanted to come across as morally serious individuals precisely because they were being interviewed by nuns instead of, say, a random guy in a suit. Regardless, the end result is captivating and should be seen by anyone who cares about the documentary form. Also of interest is that the original score, a typically repetitive organ doodle, was composed by a then-unknown Philip Glass.

Filmmaker, author and Film Studies instructor. END_OF_DOCUMENT_TOKEN_TO_BE_REPLACED
This entry was posted on Monday, September 30th, 2013 at 8:33 am and tagged with Gordon Quinn, Inquiring Nuns, Kartemquin Films and posted in Chicago Movies, Film Reviews. You can follow any responses to this entry through the RSS 2.0 feed.
« The Last Ten Movies I Saw
The Last Ten Movies I Saw »

106 responses to “The Secret History of Chicago Movies: Inquiring Nuns”