I’ve been a fan of ace American auteur Budd Boetticher ever since I saw The Tall T, a superior B-western from 1957 starring Boetticher’s favorite leading man Randolph Scott, on VHS back in the mid-1990s. That film, written by Burt Kennedy and based on a short story by Elmore Leonard (R.I.P.!), features this incredible exchange of dialogue: “How old are you, Billy?” / “I don’t know — young, mostly.” I’ve been a fan of the French iconoclast Jean-Luc Godard even longer: I first fell in love with Godard’s New Wave landmark Breathless in 1994 and, to this day, it is the movie I’ve seen more than any other. Mostly because I show it in film history classes, I’d estimate that I’ve seen Godard’s debut feature well over 60 times by now. Yet, in spite of the fact that I’ve always known Breathless uses a lesser-known Boetticher/Scott western, 1959’s Westbound, as an important reference point, I’d never gotten around to actually watching this western until recently — and this despite there being something about the reference that always struck me as curious in the extreme: when Patricia and Michel (Jean-Paul Belmondo), the lovers-on-the-lam couple at the center of Breathless, duck into a movie theater showing Boetticher’s latest opus in order to avoid a police dragnet, the French-dubbed dialogue of the Westbound soundtrack sounds suspiciously poetic — and even rhymes! For example:

Female Voice: You’re wrong, sheriff. Your tale is noble and tragic like the mask of a tyrant. No drama so perilous or magnetic, no detail can make our love pathetic.

What I’ve always wondered is whether these crazy lines, which sound like something out of a Shakespeare comedy, were in fact an accurate representation of Westbound‘s dialogue or just more Godard tomfoolery (i.e., did he create a fake Westbound soundtrack expressly for Breathless?). So I put on my Sherlock Holmes deerstalker cap and headed to my local video store to investigate . . .

Westbound was released toward the tail end of Budd Boetticher’s richest period as a Hollywood director, but it has always been considered a minor effort and has been somewhat difficult to see. It was not, for instance, part of the lavish 2008 DVD box set devoted to Boetticher and Scott, which included more well known titles such as the aforementioned Tall T, Decision at Sundown (1957), Buchanan Rides Alone (1958), Ride Lonesome (1959) and Comanche Station (1960) — not to mention an excellent new documentary, Budd Boetticher: A Man Can Do That, featuring testimonial interviews with the likes of Clint Eastwood, Martin Scorsese and Quentin Tarantino (who named Michael Madsen’s Kill Bill character, Budd, after Boetticher). The omission, however, may have had more to due with the vagaries of rights issues than anything: Westbound was originally released between Buchanan Rides Alone and Ride Lonesome but it was made for Warner Brothers while the other films included in the DVD box set were all made for Columbia. The only other Boetticher/Scott western not in the box set was their first collaboration, the highly regarded Seven Men from Now, which was also made for Warner Brothers. But, while Seven Men from Now was released to much fanfare in a “widescreen special collector’s edition” DVD from Warner Home Video in 2005, Westbound has been relegated to the more obscure “Warner Archive Collection” (i.e., it is available for sale only as a lower-quality DVD-R through their “burn-on-demand” program). Fortunately, Facets Multimedia in Chicago rents titles from the Warner Archive Collection and I was able to discover that, in spite of its second-class status, Westbound remains a very enjoyable entry in the Boetticher/Scott cycle. 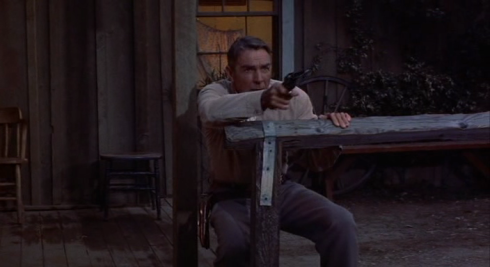 The plot of the Civil War-set Westbound centers on Randolph Scott’s John Hayes, a Union Cavalry captain who is given the perilous task of overseeing a long-range shipment of government gold via stagecoach. Hayes runs into trouble when the stage stops in Julesburg, a Colorado town full of Confederate sympathizers — including his former nemesis Clay Putnam (Andrew Duggan), a land baron who stole Hayes’ girl, Norma (Virginia Mayo), years earlier. The screenplay for Westbound was not written by Burt Kennedy (who penned four of the Boetticher/Scott movies) and it therefore lacks the terse poetry that provides the best films in the series with their most memorable lines (i.e., “There are some things a man can’t ride around,” or “A man can do that.”). It was written instead by one Bernie Giler and based on a story by Giler and Albert S. Le Vino. The Westbound script does not, however, deviate so much from the typical Kennedy/Boetticher template that it attains the poetic flights of fancy that Godard would have us believe. As much as it would please me to hear Viriginia Mayo, a pin-up with gravity-defying breasts, say that “Time is a void,” there is simply no dialogue anywhere in the movie that remotely resembles the “beveled edge” nonsense that we hear in Godard’s film. And yet every reference I’ve seen in books or academic essays alluding to the Westbound scene in Breathless assumes that the dialogue is genuine (with some critics even praising Godard for using an excerpt of dialogue from the Boetticher movie that seems to cleverly comment on the dilemma of Michel and Patricia!). There are several obvious clues, however, that Godard’s soundtrack is phony: first, there is no character named “Jessica” in Westbound. The only other female character aside from Norma is named Jeanie (Karen Steele). Then, there is the unlikely way that Godard’s poetic dialogue is spoken calmly in a sound mix that simultaneously features loud gunshots and a musical score of blaring horns, which seems to be Godard’s way of declaring “This is a western” rather than marking a serious attempt at recreating an authentic western soundtrack.

Critical confusion is somewhat understandable, however: Godard did, after all, use actual dialogue from Otto Preminger’s Whirlpool (this time in its original English-language track) earlier in the movie. These lines of dialogue can be heard in a scene in which Patricia, without Michel, attempts to elude the plainclothes cop who is following her by running into a cinema showing a revival of Preminger’s classic 1949 film noir. This scene occurs shortly after Patricia has lied to the police by denying that she knows anything about Michel’s whereabouts. The police, of course, don’t believe her and so the Whirlpool soundtrack does cleverly comment on Patricia’s situation:

Ann: No matter what I tell you, you don’t want to hear the truth. You won’t let me tell it. You think I’m lying!

Dr. Sutton: You are.

Dr. Sutton: Does this cheap parasite mean so much to you that you’re willing to risk everything to cover up for him?

In the 1950s Budd Boetticher was one of those Hollywood directors, along with John Ford and Anthony Mann, who helped to usher in a new era of “adult westerns” that featured more neurotic protagonists (Jimmy Stewart actually cries at the end of Mann’s masterpiece The Naked Spur) and dealt more explicitly with the genre’s darker themes of racism, colonialism and disillusionment (e.g., Ford’s The Searchers) than what had been possible in prewar Hollywood. In the 1960s Godard and his compatriots in the New Wave, as well as “art film” directors from other European countries, would usher in a new era of self-reflexivity and modernism that would break down the illusion of Hollywood’s “invisible” storytelling altogether. And yet, for one brief moment, on the beveled edge between these eras and continents, it was still happily possible for Jean-Luc Godard’s youthful and rebellious characters to attend — and appreciate — a new western by a Hollywood master like Boetticher.

Postscript: Thanks to Adrian Martin for clarifying the mystery surrounding the origins of the Westbound dialogue in Breathless in the comments section below. For Ever Godard, the book containing Adrian’s essay, can be purchased from Amazon here: http://tinyurl.com/l7j5e4s

Filmmaker, author and Film Studies instructor. END_OF_DOCUMENT_TOKEN_TO_BE_REPLACED
This entry was posted on Monday, September 2nd, 2013 at 9:45 am and tagged with A bout de souffle, Breathless, Budd Boetticher, Burt Kennedy, Jean-Luc Godard, Otto Preminger, Westbound, Whirlpool and posted in Essays. You can follow any responses to this entry through the RSS 2.0 feed.
« The Last Ten Movies I Saw
The Last Ten Movies I Saw »