Opening this Friday in select U.S. cities is Wong Kar-Wai’s ambitious, years-in-the-making martial-arts epic/Ip Man-biopic The Grandmaster, which premiered in China back in January shortly before receiving its international bow — in slightly truncated form — at the Berlin International Film Festival. There has been a fascinating divide in terms of how the film has been received in the East versus how it has been received the West, which in many ways reverses how Wong’s movies are usually received: The Grandmaster has gone over much better in China (with both critics and audiences, becoming the director’s first true homegrown hit in a career spanning 10 features) than in Europe and North America. While Wong has typically been a darling of western critics and cinephiles — especially in the period lasting from Days of Being Wild in 1990 to In the Mood for Love in 2000 — his movies have often been quizzically regarded as arty and pretentious specialty items back home. I think the reversal evidenced by The Grandmaster‘s reception can be explained by what might be termed its China-centric qualities, especially the way Wong explores notions of Chinese identity and history and, perhaps most importantly, the philosophical side of kung fu (though it is also chock-full of good old-fashioned kick-ass fight scenes that should satisfy genre aficionados). Western critics have been quick to criticize the new film’s narrative “patchwork” quality (it is certainly the most elliptical thing Wong has ever made) and they definitely have a point. To paraphrase something Andre Bazin said about Robert Bresson, however, I would argue that Wong sees in his narrative awkwardness the price he must pay for something more important; for, while it may not be as “perfect” as beloved earlier films like Chungking Express or In the Mood for Love, I believe The Grandmaster‘s astonishing thematic richness makes it more profound than either. 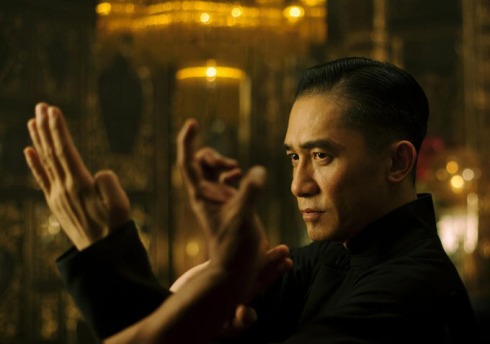 As a piece of storytelling, The Grandmaster definitely has the quality of seeming like it’s the digest of a much longer movie. The plot, such as it is, unfolds as a series of almost self-contained vignettes in the life of Ip Man (Tony Leung, underplaying but charismatic as ever), a real kung-fu master who immigrated from southern mainland China to Hong Kong in the mid-20th century, single-handedly popularized the minimalistic fighting style known as Wing Chun and became Bruce Lee’s first teacher (yes, an adorable moppet turns up as young Bruce in the final scene). Each scene feels like a narrative block that has been separated from the ones that precede and follow it by a span of several years, sometimes with only intertitles to fill viewers in on crucial missing information. Characters who seem like they will be important (especially Ip Man’s wife and a mysterious barber/martial artist known as “Razor,” played by Song Hye-kyo and Chang Chen, respectively) pop up for a scene or two, make a big impression, then vanish. The film’s second most important character is Gong Er (an excellent Zhang Ziyi), the daughter of a kung-fu master from the North, who is the center of a parallel narrative that sees her attempting to avenge her father’s murder, and who shares feelings of mutually unrequited love with Ip Man. While unrequited love has long been a pet theme of Wong’s, the characters’ emotions here, while deeply moving to witness, are not the film’s primary reason for being — as has always been the case with Wong’s movies in the past — but are rather the byproduct of a fascinating allegorical story about the paths different Chinese people took in terms of dealing with social upheaval and adapting to exile during a specific period in history. (Unusual for Wong, he collaborated on the original script with co-writers: Xu Haofeng and Zou Jingzhi.) 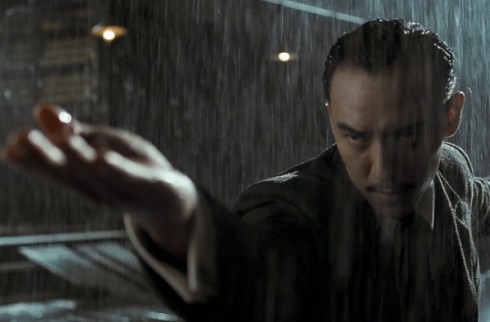 One of the Grandmaster‘s most fascinating aspects is the way it illustrates how the philosophy behind kung fu can provide valuable lessons for not just how to fight but how to live. Wong has always been concerned with preserving the past — whether shooting old buildings for Fallen Angels that he knew would soon be torn down, to making Hua yang de nian hua (2000), a short film celebrating the golden age of Chinese cinema, to lovingly recreating the past of Hong Kong and China in Days of Being Wild, In the Mood for Love, 2046 and The Grandmaster. The importance of preserving the past becomes the explicit theme of the new movie as Wong uses kung fu as a metaphor for Chinese culture in general — the “grandmaster” Ip Man is a teacher who passes along traditions and thus allows his cultural heritage to perpetuate. In this sense, one of the most important scenes shows how Gong Er’s father, Gong Yutian (Wang Qingxiang), is incapable of teaching his traitorous disciple, Ma San (Zhang Jin), a particular kung-fu move that involves the act of “looking back.” Ma San soon colludes with occupying Japanese forces and thus symbolizes disrespecting tradition and sacrificing one’s own integrity in order to survive. Gong Yutian informs Ma San that he will never attain the highest level of martial arts — the ability to “see humanity,” which follows “seeing oneself” and “seeing the world.” By contrast, Ip Man and Gong Er are able to maintain their ideals (Ip Man informs Japanese government officials that he would rather starve than eat their rice), and live in exile in Hong Kong — although their differing philosophies ensure that they too meet different destinies. Gong Er betrays her father’s final wish in seeking vengeance for his death and allows herself to become mired in pessimism and opium addiction. Ip Man, however, has the ability to look forward and backward simultaneously; his essential optimism — even in the face of overwhelming suffering (two of his daughters starve to death and he and his wife are separated from each other against their wishes) — ensures that he alone among the film’s characters is able to “see humanity,” and that his Wing Chun school in Hong Kong will flourish. Regardless (and perhaps because of) the disjointed quality the movie takes in getting there, the final scenes are the most mature and humane that Wong has ever created. 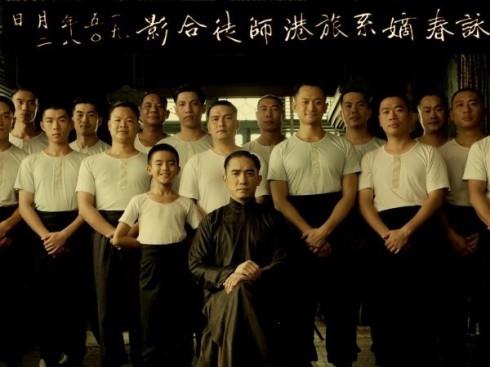 I hasten to add that I hope my analysis of the Grandmaster‘s thematic content does not make watching the film seem like anything less than the viscerally exciting experience that it is. The action scenes were choreographed by the great Yuen Woo-Ping and part of the fun of watching the characters fight is seeing how their personalities are expressed through their different fighting styles: the clever and humble Ip Man’s brand of Wing Chun is based on the precise execution of a few effective blows, while the more petulant Gong Er is the last remaining practitioner of the maximalist style known as “64 hands.” Razor — a master of the Bagua school — is both barber and undercover assassin, and wields as a weapon the blade that gave him his nickname. Wong, working with his longtime editor (and production/costume designer) William Chang, as well as collaborating for the first time with cinematographer Phillipe Le Sourd, has broken martial-arts movie tradition by capturing the fights not with long takes and long shots but by using close-ups, varying film speeds, fast cuts and an unusually shallow depth field. (This last aspect is a major trend in contemporary digital cinematography and has the effect of turning everything in front of the camera lens — drops of water, icicles, Zhang Ziyi’s porcelain skin, etc. — into a fetish object.) These breathtaking visuals, aided immeasurably by the bone-crunching sound effects, do not seek to whip viewers of the ADHD set into a frenzy the way that most spatially/temporally-challenged Hollywood action movies do. Rather, they manage to break down each fight — especially the instant classic train-station climax involving Gong Er and Ma San — into many comprehensible individual moments. In other words, to watch The Grandmaster is to take a master class in filmmaking.

You can view the trailer for The Grandmaster via YouTube below (please ignore the awful car-commercial voice-over):

Filmmaker, author and Film Studies instructor. END_OF_DOCUMENT_TOKEN_TO_BE_REPLACED
This entry was posted on Monday, August 19th, 2013 at 8:43 am and tagged with The Grandmaster, Wong Kar-Wai and posted in Film Reviews. You can follow any responses to this entry through the RSS 2.0 feed.
« The Last Ten Movies I Saw
Celluloid Flashback: The Green Ray »

25 responses to “Now Playing: The Grandmaster”