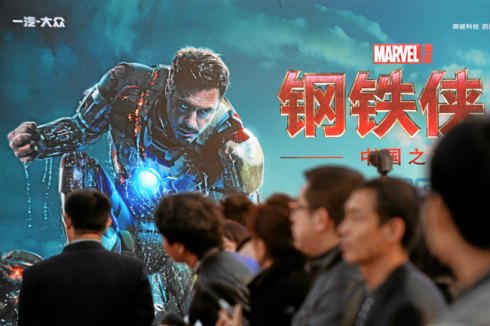 One of the most provocative commentaries about the landscape of the new Hollywood arrived last month in the form of a Salon article by Lynda Obst entitled “Hollywood’s Completely Broken.” The thrust of Obst’s troubling piece, an excerpt from her forthcoming book Sleepless in Hollywood, is that the near-ubiquity of big-budget CGI-laden spectacle films, almost all of which are sequels, remakes or reboots, is directly attributable to the sharp decline in DVD sales that began about five years ago with the advent of online streaming. Not merely another tired think-piece about the “death of cinema” (which is usually nothing more than a writer’s thinly disguised lament for his or her lost youth — whether that occurred in any decade from the 1960s through the 1990s), Obst, a movie producer by profession, uses actual interviews with a Hollywood studio executive to bolster her argument about the film industry: the major studios, which have long relied on profits generated by the sales of physical media, have had to readjust by making more movies aimed at the international theatrical market. Every studio wants every film they make to earn a billion dollars in ticket sales, especially since the global success of Avatar in 2009, and they’re now willing to routinely spend upwards of 200 million dollars in order to make that happen.

Unfortunately for those of us who care about cinema, this also means that there has been a disheartening uniformity to the most recent spate of Hollywood blockbusters: the “plot” of every movie is now more than ever merely an excuse to blow stuff up, the movies cannot exceed the PG-13 rating (which, of course, means a total absence of sex, nudity and even the word “fuck”), there can be nothing in these movies that might be deemed politically inflammatory, and the movies need to be simple enough, in every conceivable way in terms of form and content, to be understood by teenagers in every country around the world (“Say, how well do you think these one-liners will go over with Malay subtitles?”). And this is to say nothing of Hollywood’s annoying recent trend of “courting” the massive Chinese audience through superfluous scenes set in China or featuring Chinese characters or Mandarin dialogue — examples of which can be found in everything from The Dark Knight to Skyfall to Iron Man 3 to the forthcoming Transformers 4. In short, Hollywood has never been more risk-averse than it is today.

It has also become increasingly common to hear cultural commentators and ordinary folks alike remark that “the best storytelling has migrated to television.” While I’ve greatly enjoyed recent television endeavors by some auteurs more commonly associated with the “big screen” — including Martin Scorsese, Todd Haynes and Jane Campion — I’m alarmed at how many people I know treat this perceived cultural shift as a foregone conclusion. A lot of intelligent adults, the kind who used to go to the theater regularly, have virtually conceded that the movie theater has become a place primarily for teenagers and children (and “children of all ages,” as the saying goes). Even more bizarre, I have more than a couple friends who have attended the latest round of Hollywood blockbusters in the theater but haven’t yet caught up to Richard Linklater’s masterpiece Before Midnight, in spite of the fact that they are acknowledged fans of Linklater’s other work. I’m assuming they figure that, in a world of CGI spectacles, a character-based romantic comedy consisting solely of scenes of Ethan Hawke and Julie Delpy talking to each other can wait to be seen on their small screens at home. And yet it would be a tragedy if films like Before Midnight (which is currently underperforming at the box office, even considering its small budget), are eventually relegated to television entirely. I would argue that the chief pleasures of Linklater’s new movie are exquisitely cinematic and actually do need to be seen on the biggest screen possible in order to be fully appreciated.

After recently taking two Film History classes on field trips to see Before Midnight in the theater, I was astonished to hear many of my students say they felt “immersed” in the world of the movie and they felt that it was specifically Linklater’s use of long takes and lack of cutting (in contrast to the rapid editing of contemporary Hollywood action movies) that made them feel as if they were “in the scene” with the characters. There is no doubt in my mind that the relationship of the size of the screen to the audience is precisely what makes Before Midnight such a transformative experience for many viewers. I would also argue that, in a similar vein, the film’s relative dearth of close-ups makes such shots all the more impactful when they do occasionally appear on a large screen. My favorite scene in this talky movie is one without any dialogue at all: after the big blow-out argument in which Delpy’s Celine storms out of their romantic-getaway hotel room, Hawke’s Jesse looks around the room as Linklater cuts between close-ups of Jesse’s face and shots of — in order — a full cup of tea, the hotel room door, a bottle and two full glasses of wine, and their unslept-in hotel-room bed. For me, seeing that close-up of Celine’s undrunk cup of tea on a giant cinema screen feels both momentous and heartbreaking, qualities with which I don’t expect it to register on my home television (even on Blu-ray and with a 42-inch screen).

I recently half-joked to a cinephile friend on facebook that I considered myself “a warrior in a cultural battle” in the act of taking my students to see Before Midnight in the theater. Yet surely everyone who cares about cinema, myself included, could be doing more to put our money where our mouths are by diversifying in terms of the kinds of movies we choose to see in the theater — instead of just staying at home and bitching about how Hollywood is producing garbage. And I’m not by any means calling for a boycott of Hollywood blockbusters (though I do think they were a lot easier to swallow when they weren’t being released every single week, and seeing them felt more like an option rather than an enforced duty); I did, after all, recently enjoy Monsters University and I’m looking forward to catching up soon with Pacific Rim, Guillermo del Toro’s robots vs. monsters epic. I’m merely suggesting that movie lovers need to make it a point of going to the theater regularly and that the continued theatrical success of small and medium-budget movies (of independent, foreign and Hollywood origin) will be vital to the overall health of our film culture in the future. 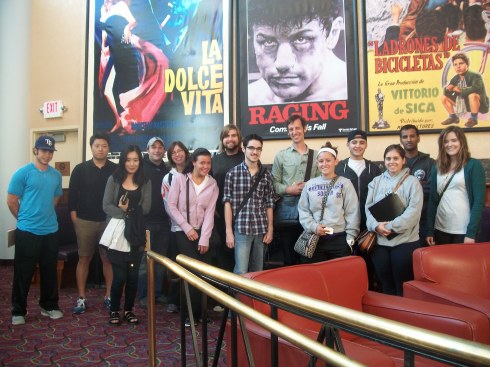 Me and my Intro to Film class from Oakton Community College before a recent screening of Before Midnight in Evanston, IL.

Filmmaker, author and Film Studies instructor. END_OF_DOCUMENT_TOKEN_TO_BE_REPLACED
This entry was posted on Monday, July 15th, 2013 at 8:52 am and tagged with Before Midnight, Lynda Obst, Richard Linklater, Sleepless in Hollywood and posted in Essays. You can follow any responses to this entry through the RSS 2.0 feed.
« Happy Bastille Day from White City Cinema
The Last Ten Movies I Saw »