Woodstock from Welles to Ramis: A Photo Tour

I recently drove 50-odd miles northwest of my fair city of Chicago to visit, for the first time, the quaint suburb of Woodstock, Illinois. The purpose of the trip was to take pictures for possible inclusion in Flickering Empire, the forthcoming book that I co-wrote with Adam Selzer about the history of early film production in Chicago. I specifically wanted to visit the former location of the Todd Seminary for Boys where Orson Welles, an alumnus, co-directed the film The Hearts of Age in 1934 when he was just 19-years-old. Although I knew the Todd School had closed in 1954 and that all of its buildings had since been razed, I wanted to see where it once stood and hopefully take photos of any surviving landmarks — such as a giant outdoor bell or a distinctive gravestone — that contributed to such striking images in the movie. I also knew that historic downtown Woodstock — standing in for Punxsutawney, Pennsylvania — was where Illinois-native Harold Ramis had filmed Groundhog Day in 1993. Since Groundhog Day is one of my favorite comedies and a movie I frequently show in film studies classes, I decided to try and visit prominent locations from that film as well. Below is a photo tour of my day-long expedition.

Here’s Orson Welles and his classmates in front of the residence building known as Grace Hall. This photo would’ve been taken sometime between 1926 and 1931. Click on the photo to enlarge it (Orson is the tall lad standing in the middle — his head is directly beneath the window on the far left side of the building):

No one knows exactly where The Hearts of Age, Welles’ debut film, was shot but it was almost certainly somewhere on the Todd campus. Here’s 19-year-old Welles heavily made-up as “Death” in a still I created from the DVD of the film: 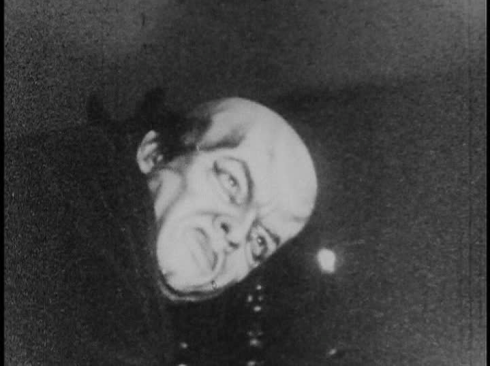 Tragically, Grace Hall, the final building standing from the original Todd School campus, was razed in 2010. It was reportedly still in excellent condition when the owners demolished it in order to build new “duplex” housing for seniors: 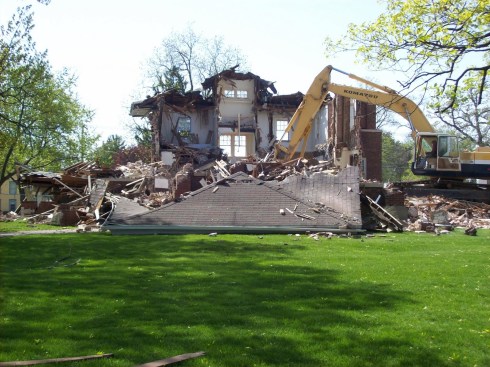 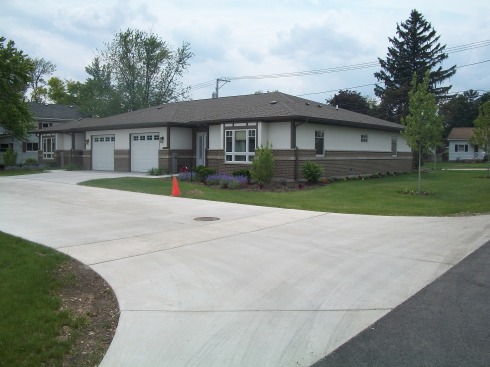 Welles also performed at the famous Woodstock Opera House. Here he is (bottom left), with fellow summer-stock players Michael MacLiammoir and Louise Prussing, onstage at the Opera House in 1934: 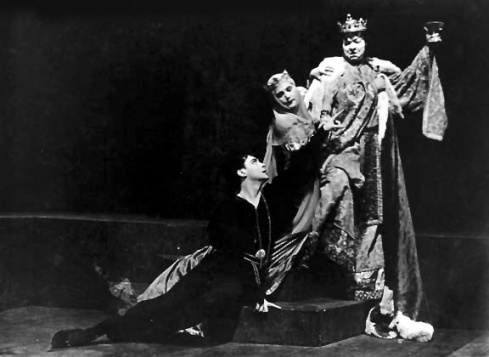 The exterior of the Woodstock Opera House as seen today (note the Italianate bell tower, which probably inspired the climax of Welles’ 1946 film The Stranger): 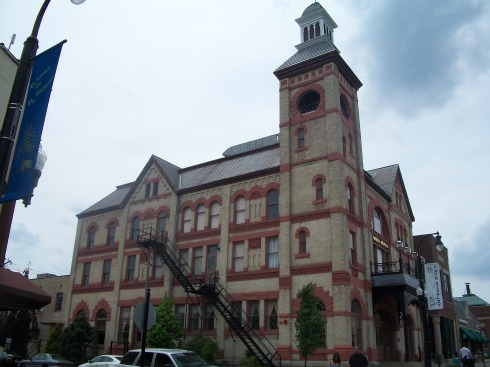 Speaking of which . . . one of the many ways Bill Murray’s Groundhog Day character, Phil Connors, attempts to commit suicide in the film is by leaping from the tower: 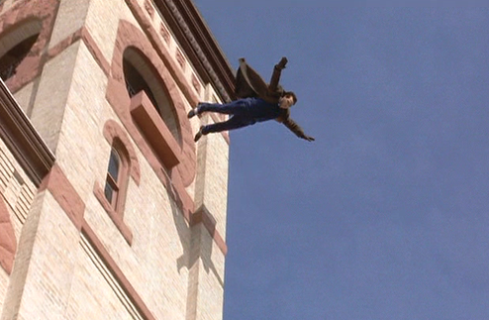 Here’s a frontal view of the Opera House. Located at 121 Van Buren St, it also plays the “Pennsylvania Hotel” where Andie McDowell’s character, Rita, stays in the movie: 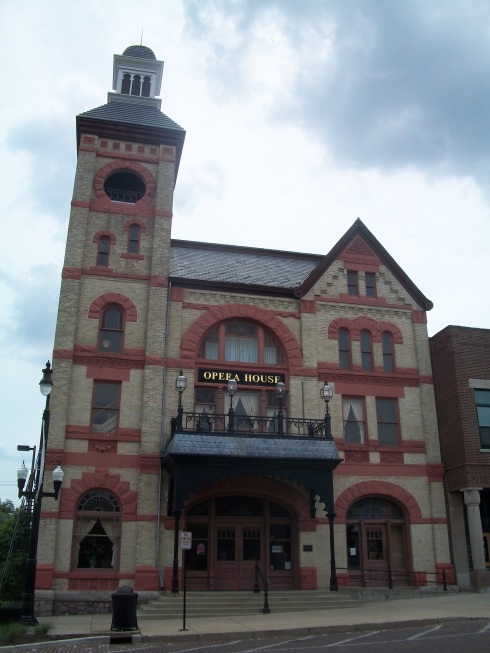 Phil, meanwhile, stays at a bed and breakfast known as the “Cherry Street Inn.” In real life, this gorgeous Victorian mansion is actually a private residence: 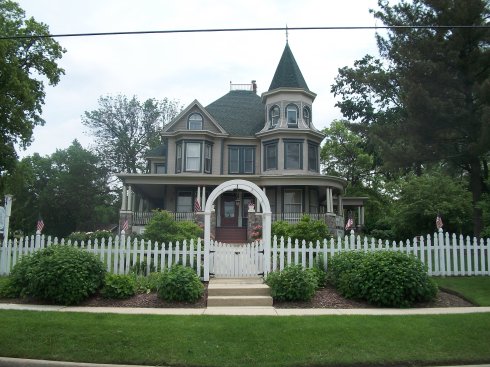 Here’s the Woodstock Theater, which plays the “Alpine Theater” in the film, as seen today. The address is 209 Main Street (sadly, Heidi II was not playing when I visited): 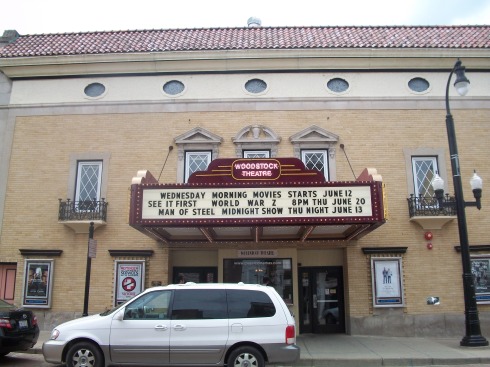 The “Tip Top Cafe,” where Phil has breakfast with Rita and Larry (Chris Elliot), is now a taqueria. It is located at 108 Cass St: 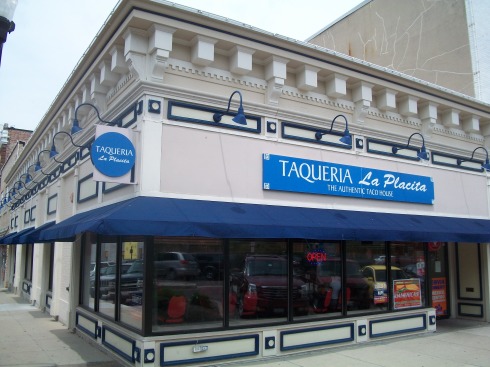 Woodstock Square, which plays “Gobbler’s Knob” in the film: 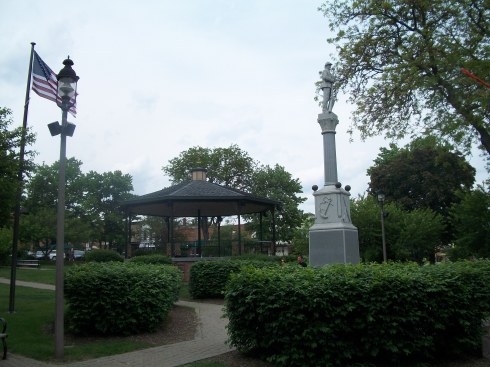 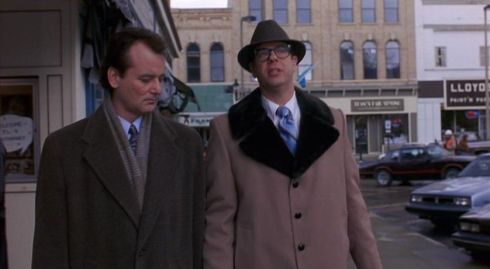 The same sidewalk as seen today: 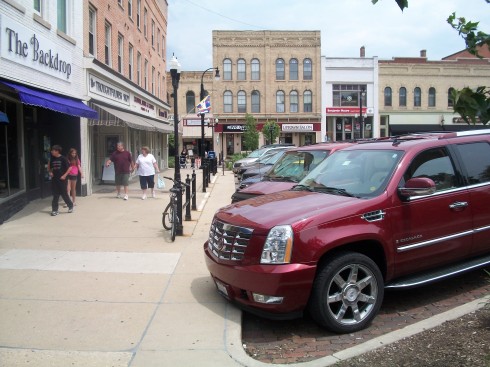 “Watch out for that first step. It’s a doozy!”: 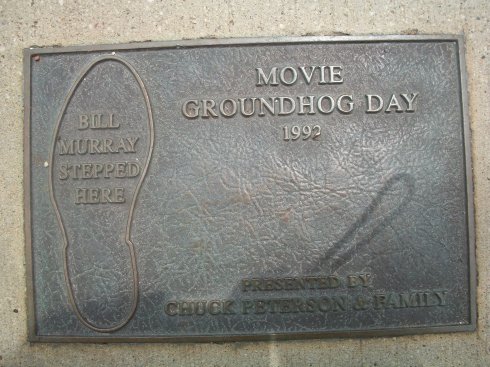 There are some very impressive Orson Welles celebrations planned for Woodstock in 2014 and 2015. You can learn about them on Wellesnet, the invaluable Orson Welles Web Resource, here: http://www.wellesnet.com/?page_id=5387

You can learn more about Woodstock and Groundhog Day here: http://woodstockgroundhog.org/pages/tour.html

Unless otherwise noted, all of the above photos were taken by me.

Filmmaker, author and Film Studies instructor. END_OF_DOCUMENT_TOKEN_TO_BE_REPLACED
This entry was posted on Monday, June 17th, 2013 at 7:11 am and tagged with Groundhog Day, Harold Ramis, Orson Welles, The Hearts of Age, William Vance and posted in Photo Tours. You can follow any responses to this entry through the RSS 2.0 feed.
« Happy Father’s Day from White City Cinema
Filmmaker Interview: Bill Duke »

28 responses to “Woodstock from Welles to Ramis: A Photo Tour”